A fun weekend and shots

Today I took Bryce for his first RSV shot. I must say neither one of us enjoyed the trip. I got a call from the doctor office yesterday saying that insurance had approved Bryce to have these shots (the shots are very expensive...$1000.00 each). They got him approved for an October shot so she said can you come in sometime before Friday? Of course the only appointments they had available were the worst times for us. The best appointment time I could get was today at 3:45. Ummm yea...so it took 50 mins to get there because the traffic is so terrible near where we had to go. We were near St. Josephs and Northside hospital. Once there we had to fill out paper work, wait, talk to a doctor and then finally the shot. From what I understand the RSV shot stings a bit more than the typical immunization shot because it's a thicker fluid. Bryce was none too happy about his shot to say the least! By the time we got out of there it was 5:00, which meant prime Atlanta traffic time. I rolled into home at 6:00 and was greeted by 2 very hungry girls. No rest for the weary I guess. 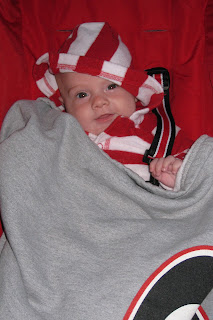 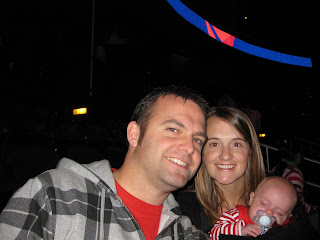 All bundled up for going outside. Bryce slept through most of Disney on Ice.
While we were at the doctor Bryce did get his weight checked. Drum roll....he weighed 11.93 lbs! He just keeps putting the weight on which is great news. More great news...they listened to his lungs and was given the thumbs up because they were nice and clear. Go Bryce! One month down...five months and five RSV shots to go. The doctor did remind me that these shots will not prevent him from getting sick, but they will help him fight an illness if he does get one. 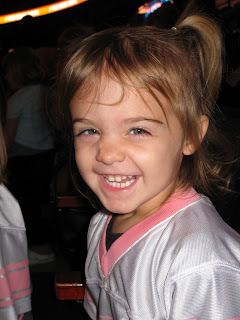 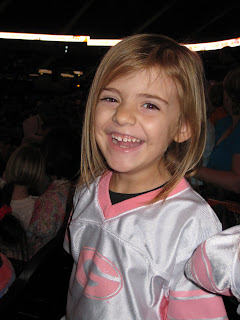 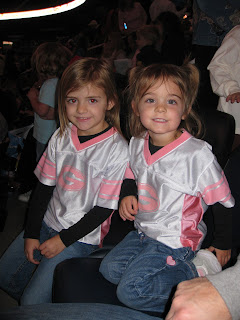 We took the girls to Disney on Ice last weekend. They LOVED it. My brothers girlfriend, Jenia, got us tickets (THANKS JENIA!) So we bundled up all the kids and headed down to Phillips. The girls were mesmerized. Their eyes never left the ice. Bryan and I enjoyed it as well. I was pretty impressed with the whole production. If you've never been I do recommend taking the kiddos - boys or girls- to check it out. Fun times for the whole family. 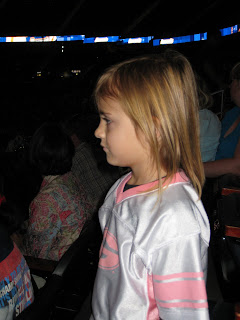 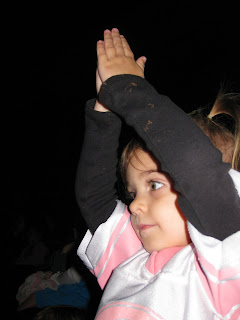 Sydney and Jordyn didn't look away from the ice the entire time! 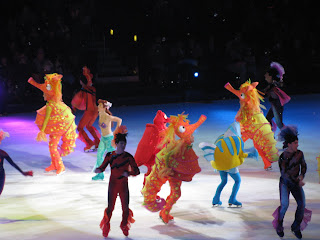 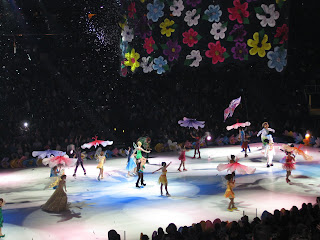 A scene from The Little Mermaid and a scene from Tinkerbell. We also saw The Lion King, which was really good.

On top of our fun trip to see Disney on Ice, Bryan and I got a chance to see Wicked at the Fox. We went with Mark and Missy (Bryan's cousin and his sweet wife) and well...I loved it!! Bryan said he really enjoyed it as well. I have read the book so it was interesting to see the differences between the two. Aside from the play being wonderful, it was nice to spend some time with Bryan. I feel like I haven't seen him much at all the past few weeks, but that is all going to change starting next week. Why? Because volleyball season is coming to an end!!! YAH!!! I am ready to have my husband back and for our evening routine to not be so rushed. Speaking of volleyball - Bryan's team is playing in the state Final Four tomorrow night at Kell High School. Their match is scheduled to start at 7:00 so if you don't have anything to do come cheer on Pope. If they win tomorrow night, they go to the state title match on Saturday. Go Pope! 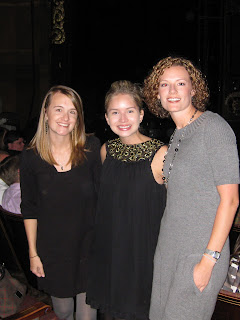 Me, Missy and Mary at Wicked. We forgot to take a picture with the boys.

That's about it. Next on our appointment schedule is "Clinic" on November 6th. I will be in touch then. Hugs to you all.
Jenny
Posted by Jen at 8:04 PM
Email ThisBlogThis!Share to TwitterShare to FacebookShare to Pinterest