Thursday Bryce and I headed down to CHOA for his August clinic visit.

Who loves going to clinic? 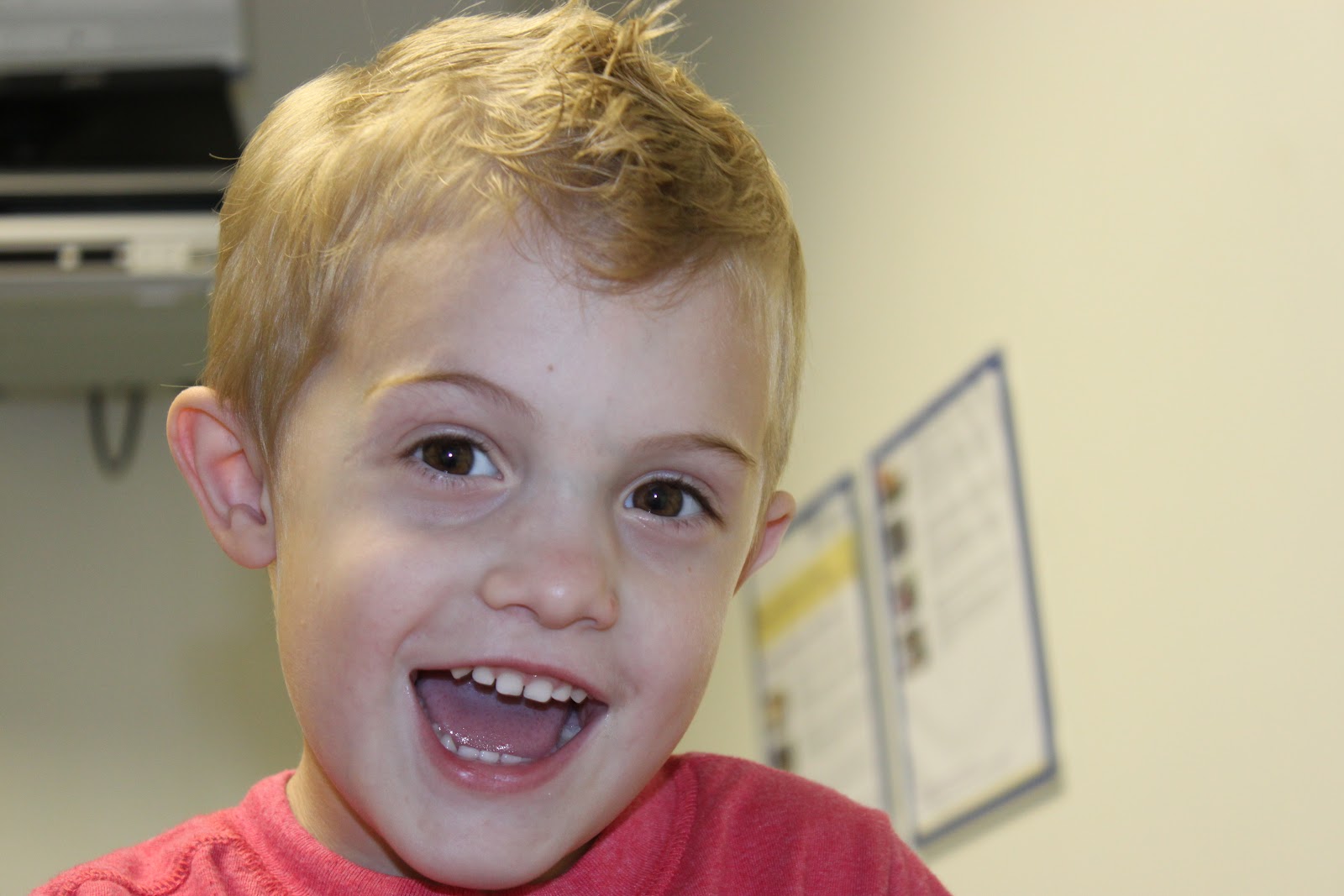 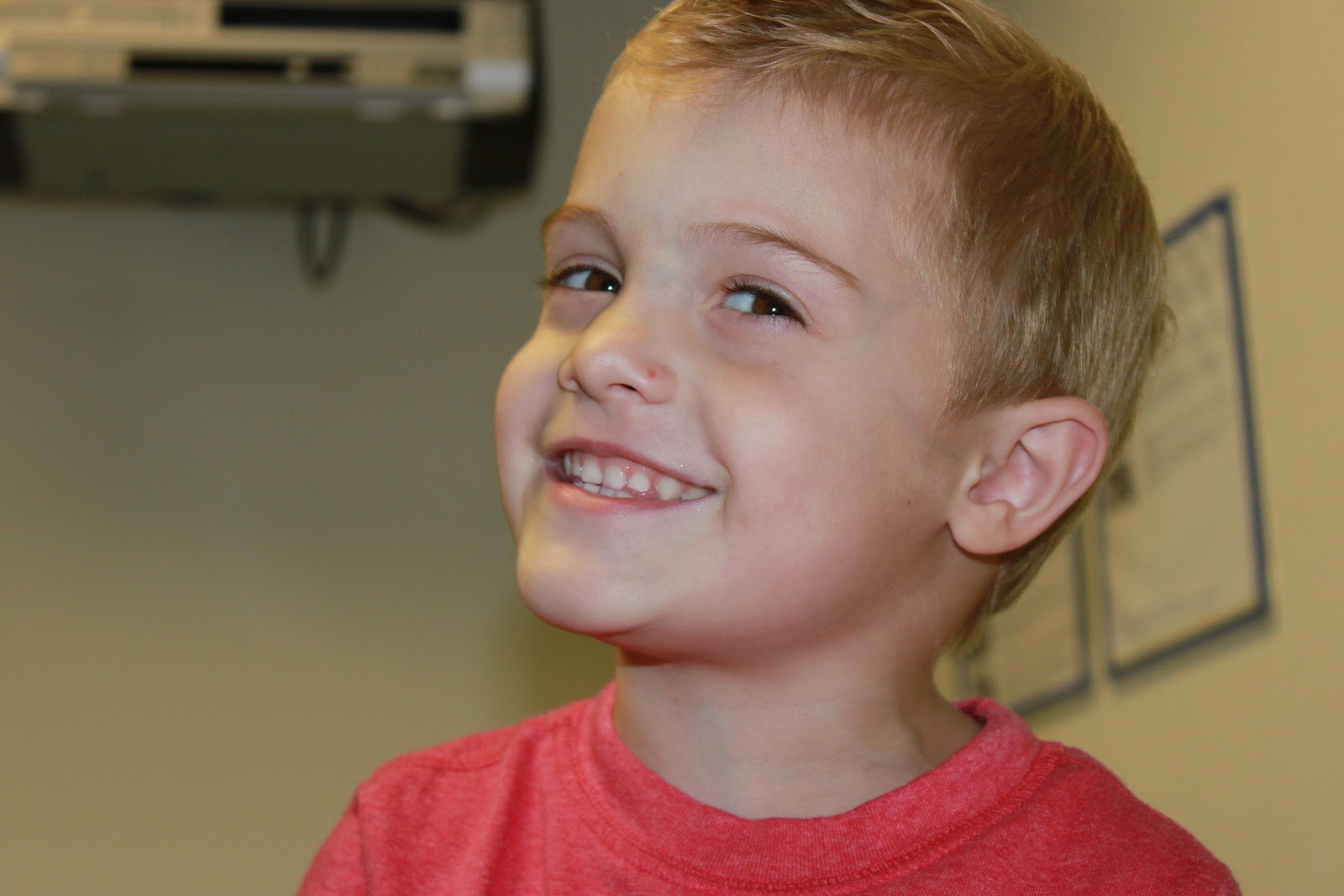 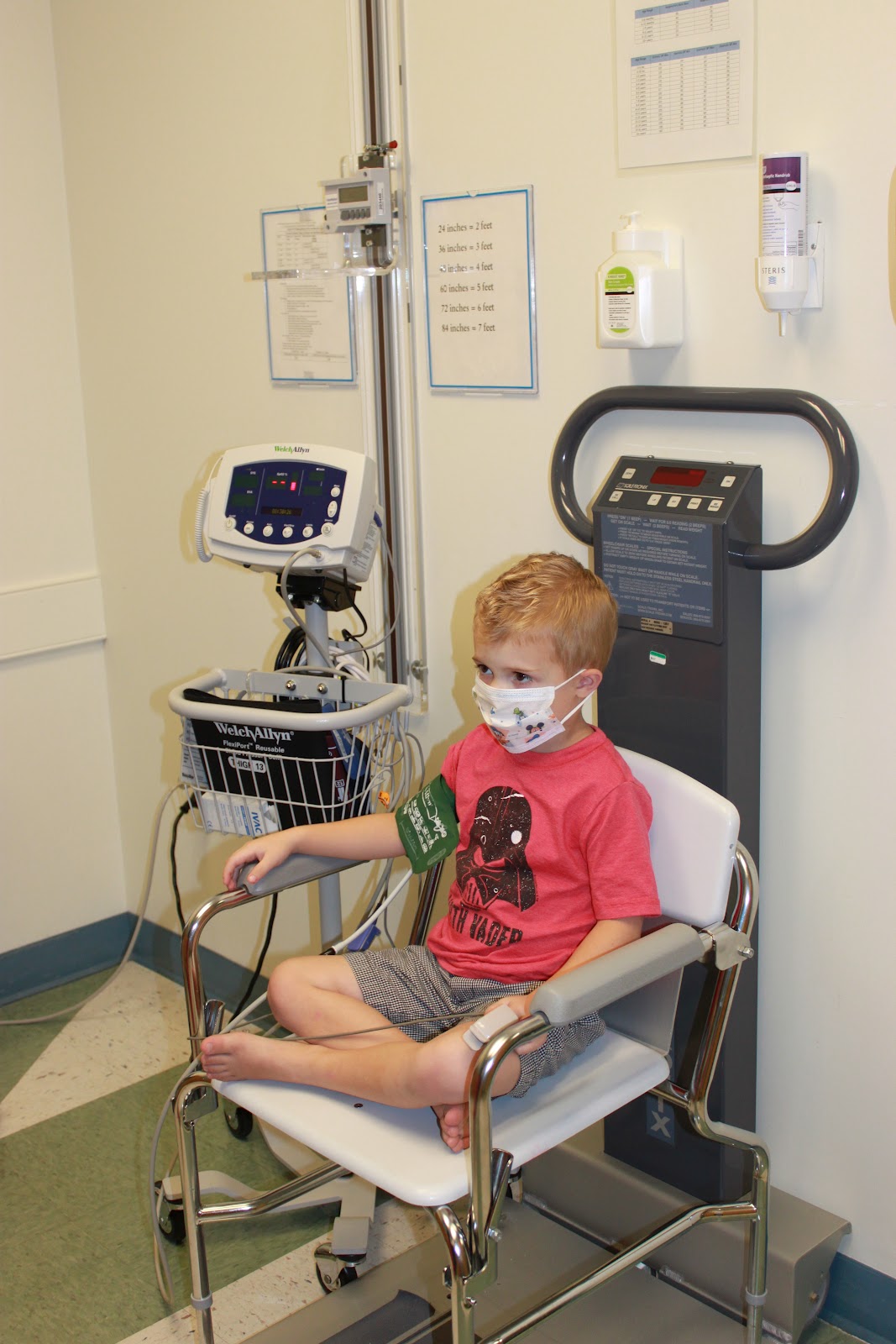 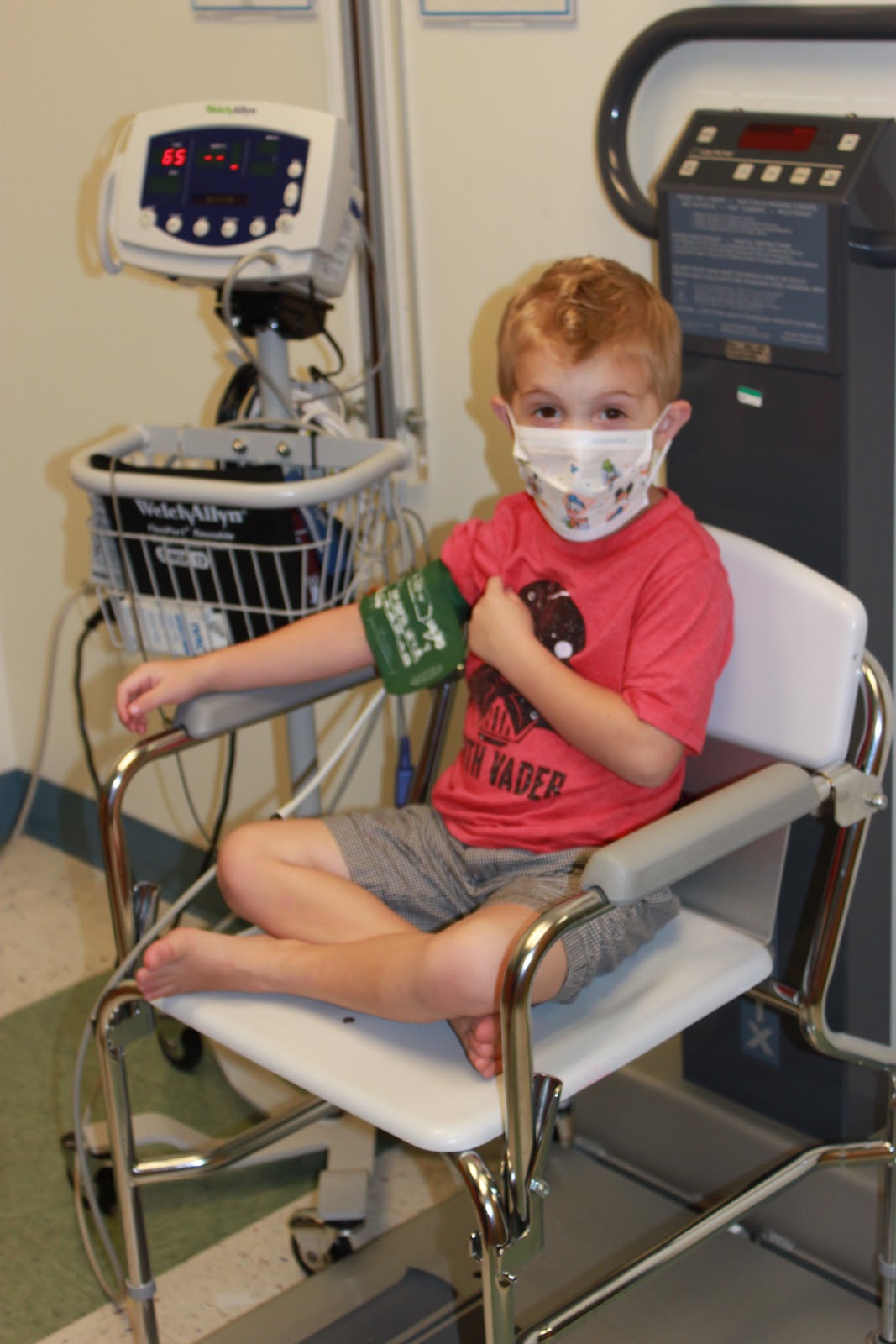 He is becoming a pro at "sitting still like a statue" while they take his vitals.
What used to take several attempts now takes only one!

This was a pretty laid back clinic visit since we didn't have any labs or x-rays to take. Each team member that visited were pretty much in and out in no time at all. Bryce kept asking everyone that came in if they wanted to play cars with him. Since he hasn't had any issues this summer I really didn't have much to discuss with any of his team members. His pulmonary doc said his lungs sounded nice and clear. He has a little swelling in his nasal passages, but I expected that because he has been a little congested lately. 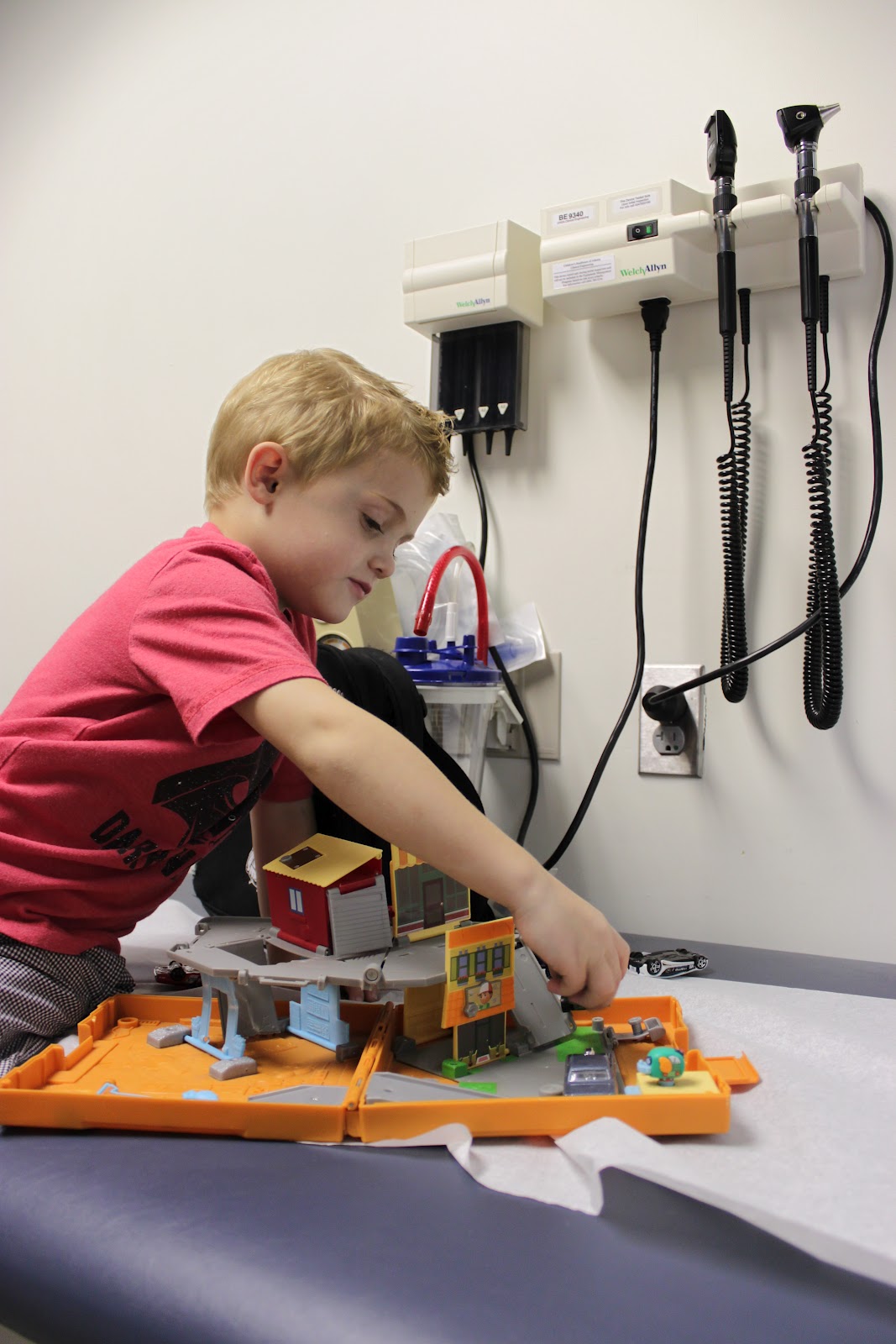 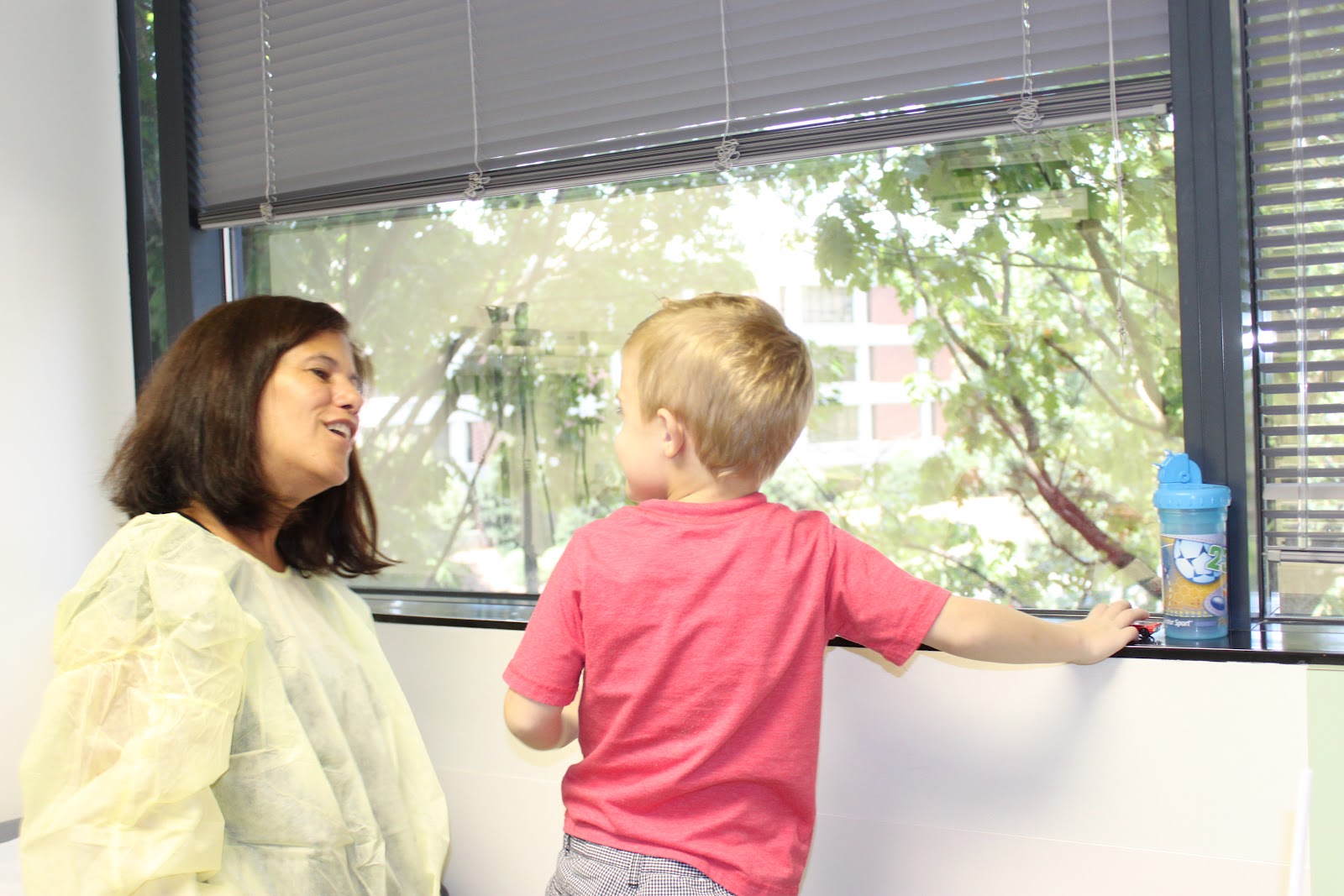 This is Bryce talking with the pharmacist specialist.
She was so sweet and took him up on his offer to play cars.
They ended up having a race.
They tied.

The longest visit came from our GI doc, "Dr. P", which is pretty typical. Most of Bryce's CF issues have always been GI related so we tend to spend some time talking about his calorie intake, how well he eats or doesn't eat, weight gain, and what his visits to the bathroom are like. 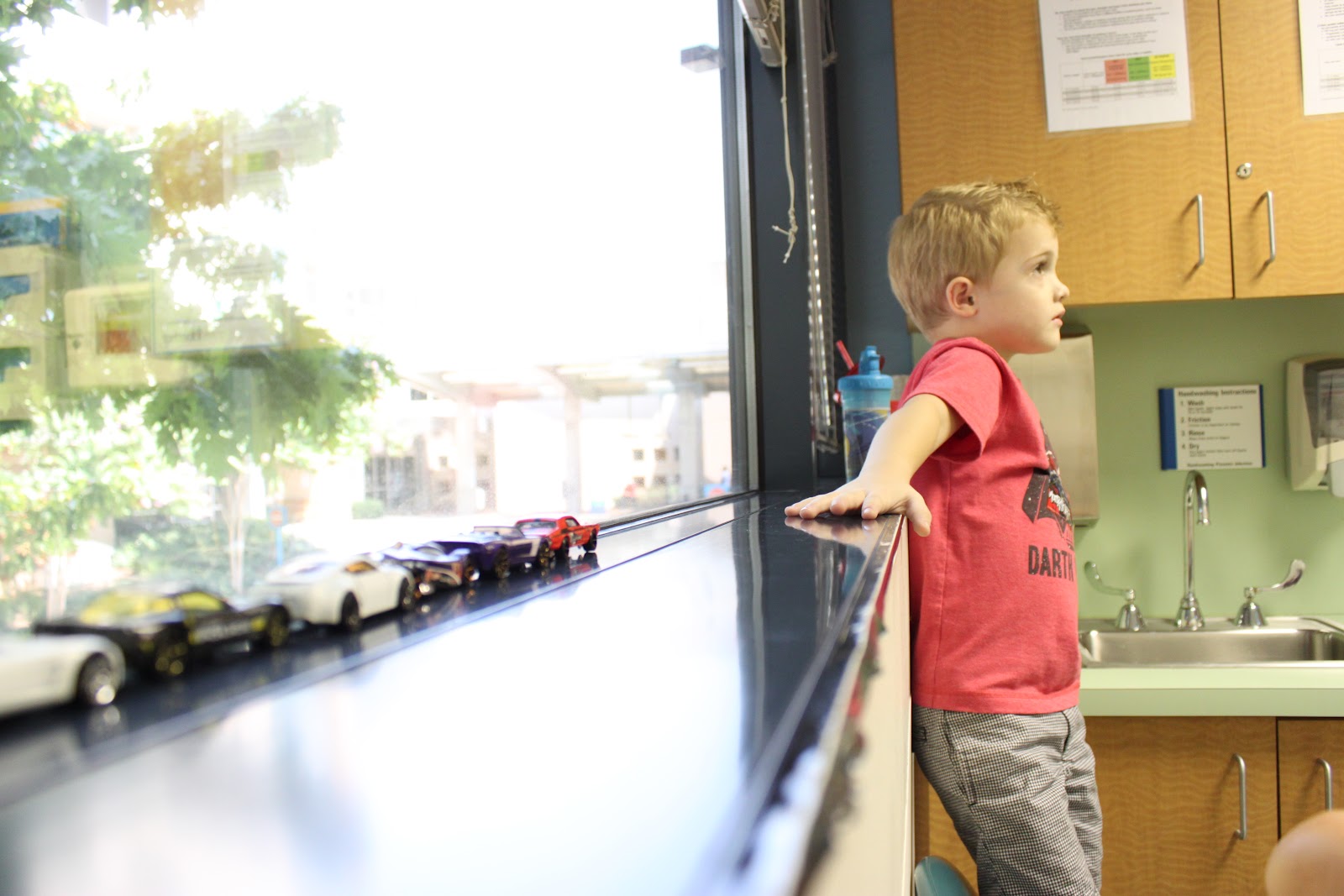 In between playing cars he would watch a little TV. 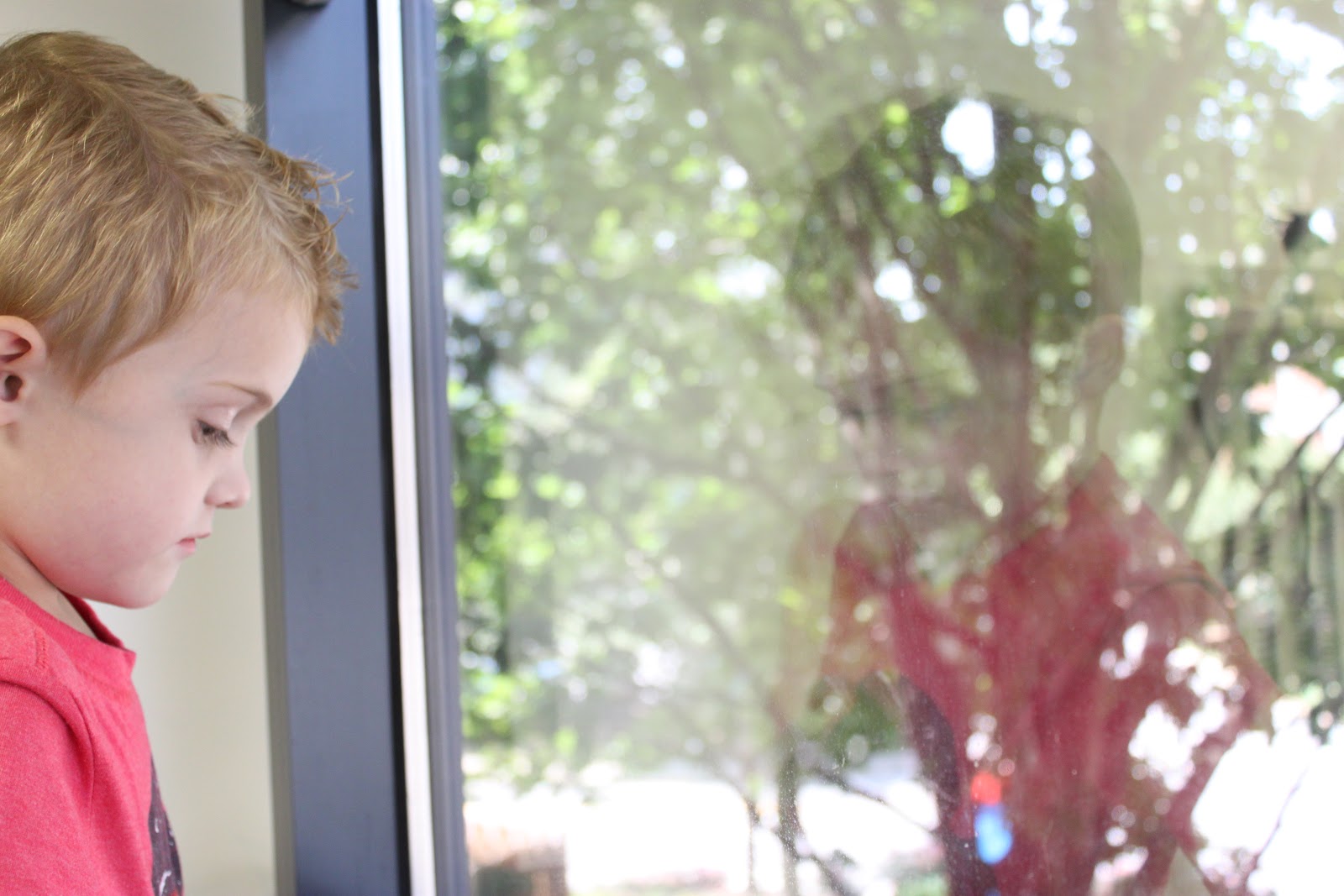 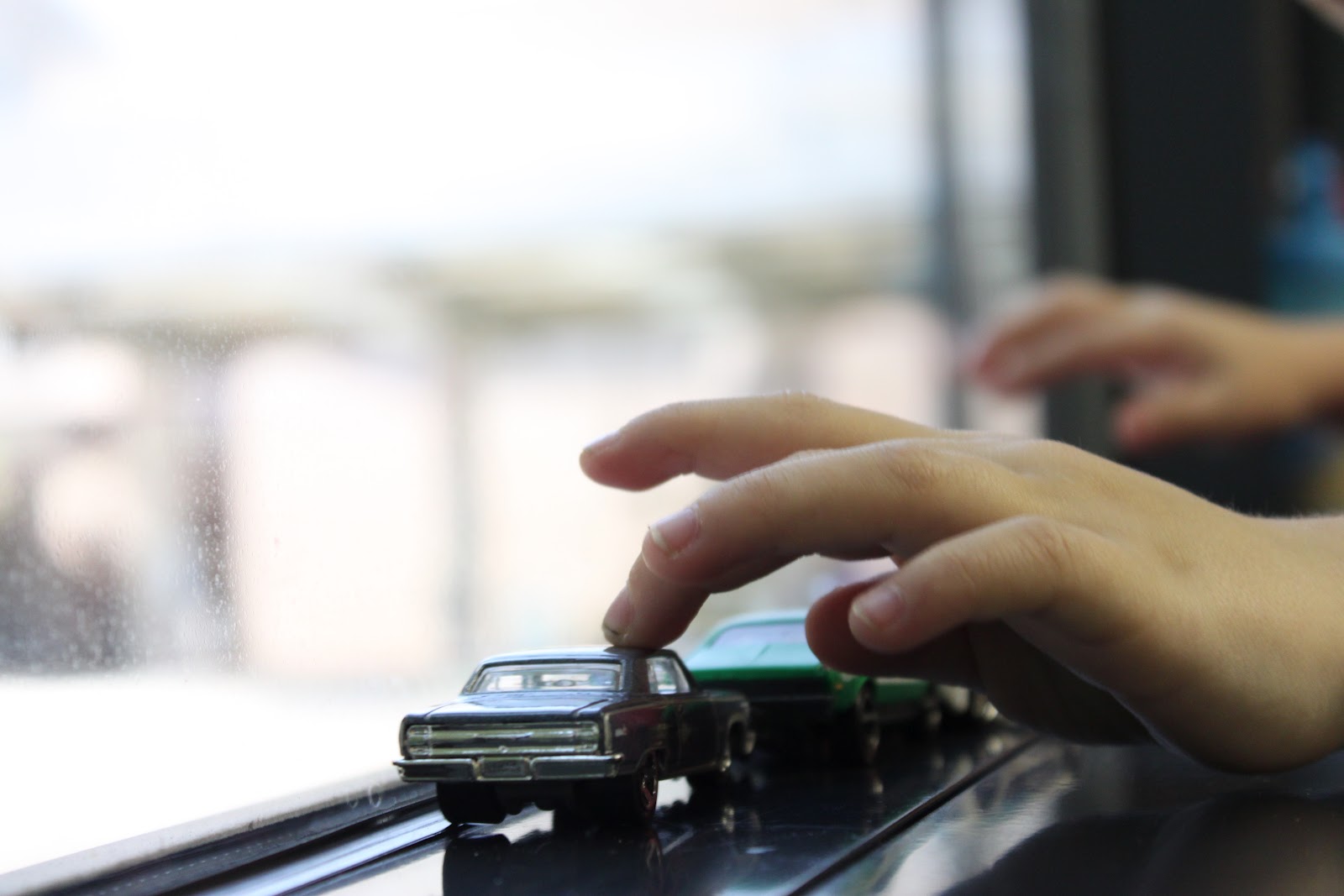 The window ledge in the rooms at CHOA make a perfect road which Bryce thinks is pretty cool. 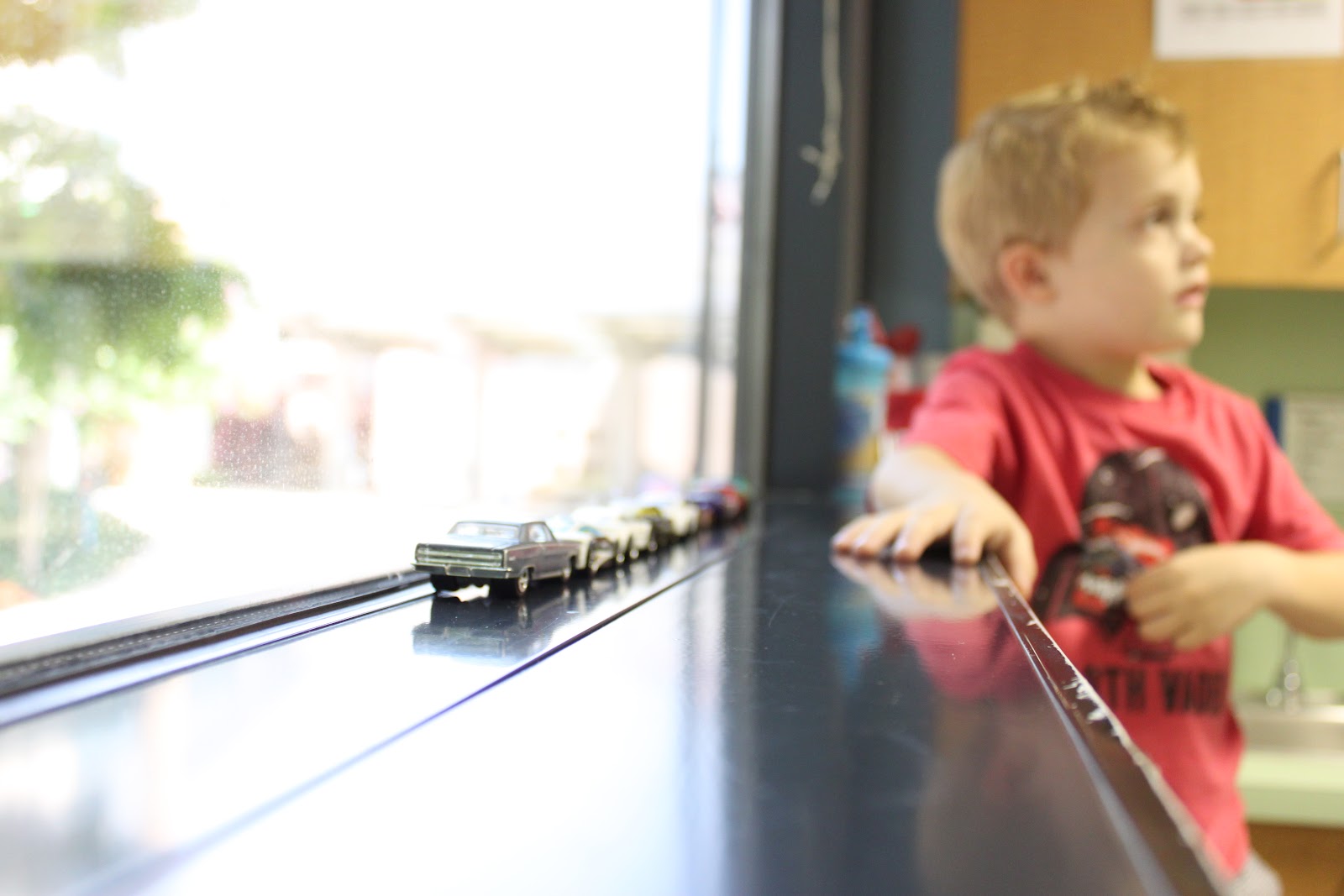 As CF parents we are constantly calculating calories for Bryce and trying to balance out his calorie intake and enzyme amount. I know we are doing a good job by what his poop looks and smells like. The other way we monitor this is his weight gain or loss. If his weight is maintaining or going up, great. If it's going down along with yucky poops then I know we have a problem. 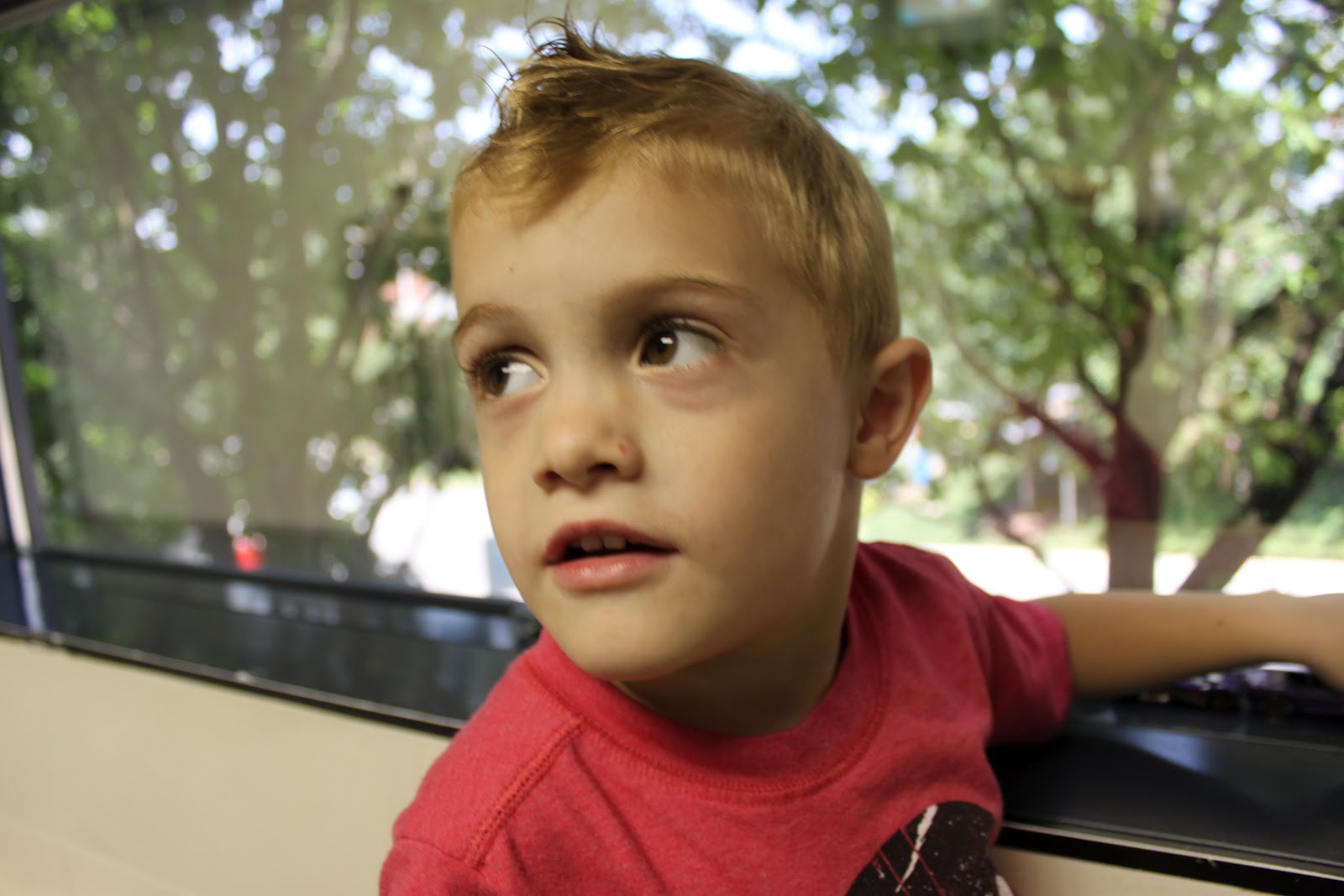 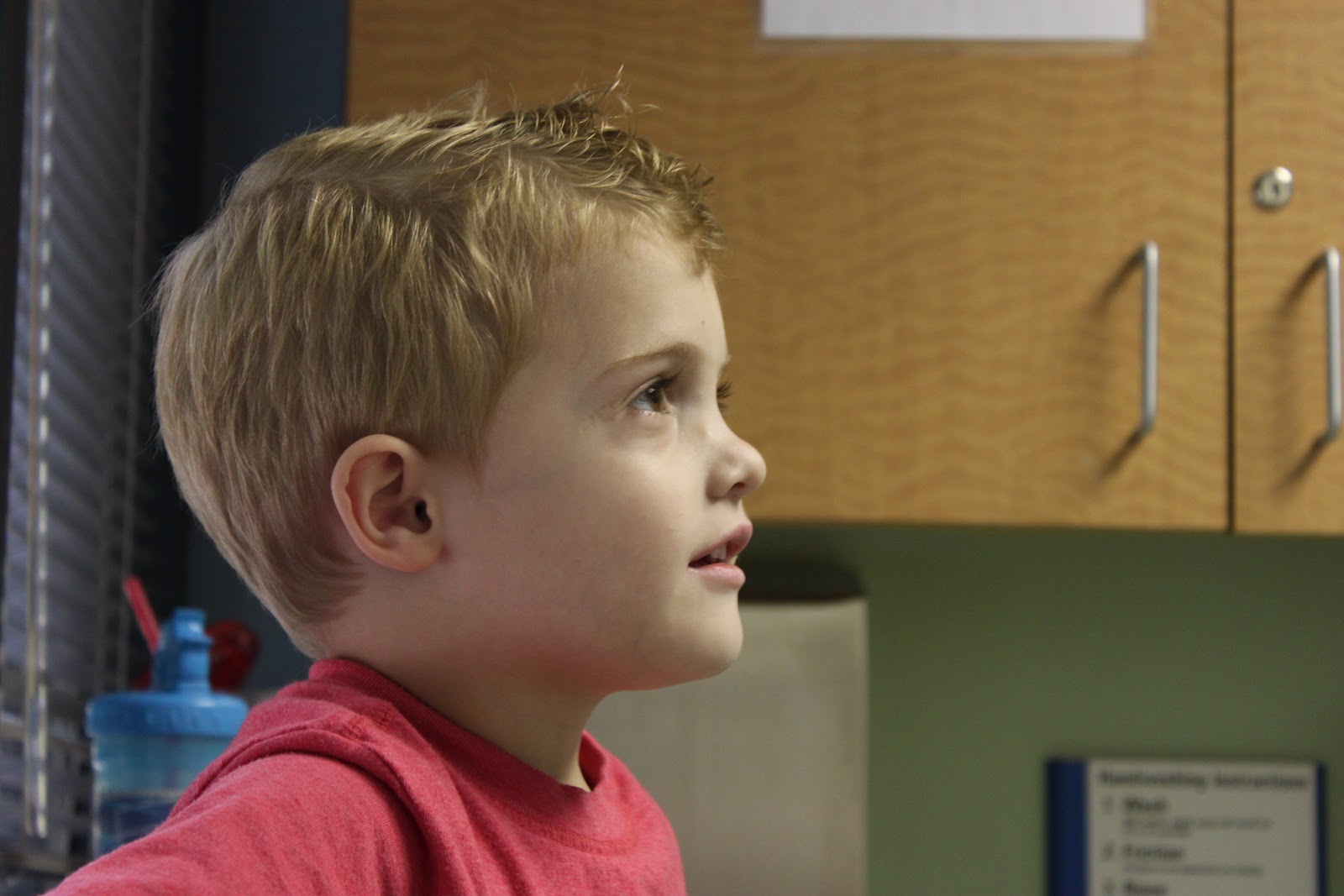 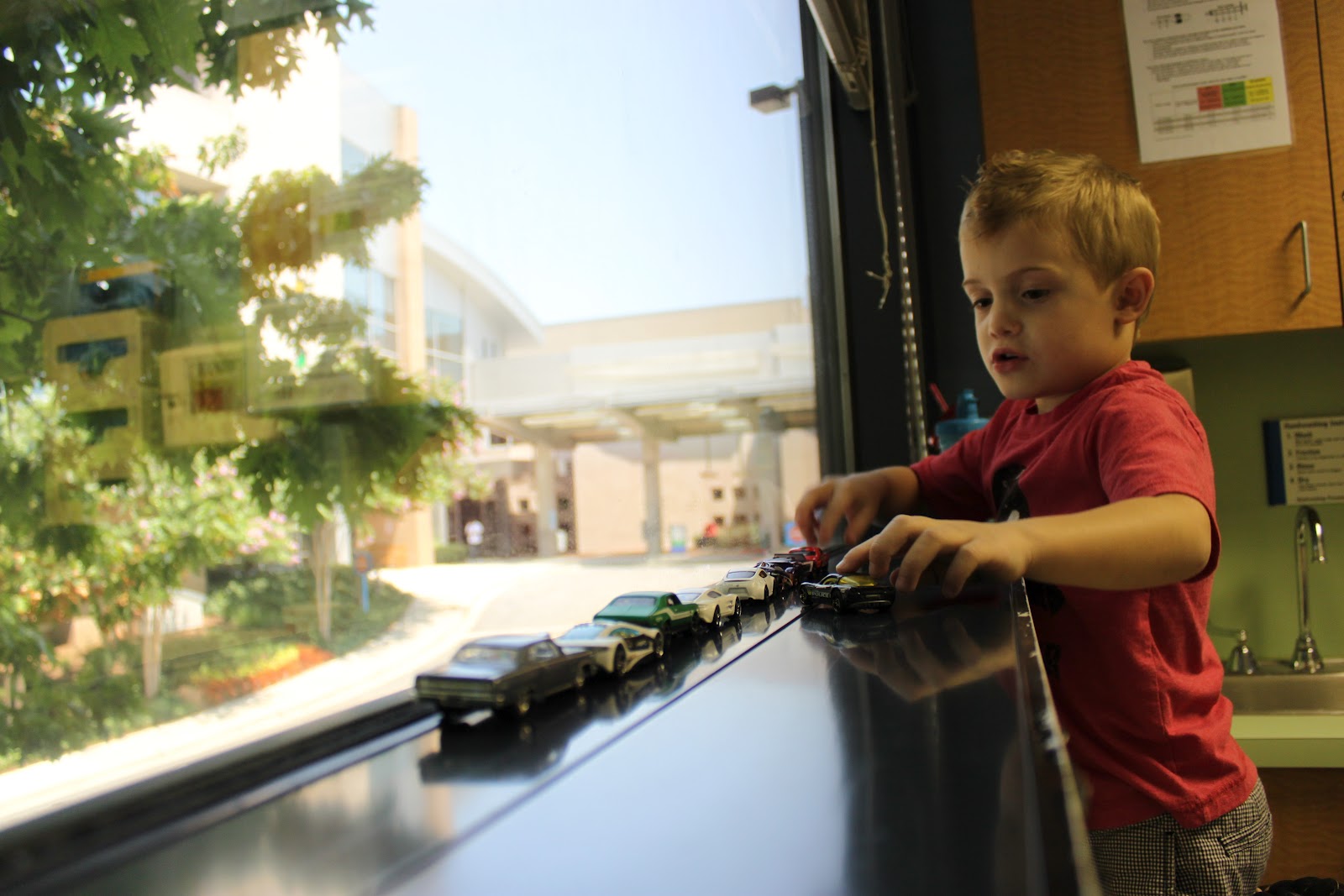 So - with that said, getting Bryce to actually eat the high calorie food to balance out his recommended enzyme intake seems to be a full time job. Meal time with Bryce is currently one of my least favorite activities. It tends to be stressful, frustrating and so very far from enjoyable. Being that Bryce is a very active boy it's difficult to get him to sit still and focus on eating. What frustrates me the most is when he takes the enzymes and then eats only a few bites or none at all and refuses to drink his milk (which is where most of his calories are). He is not quite old enough to grasp the concept that eating, taking enzymes and how his stomach feels all correlate. Meal time consists of constantly saying:  Eat this. Eat that. Take another bite. Drink your milk. Sit down. Stay in your seat. Swallow the food you are holding in your mouth, etc. All the while Bryan and I have our eyes on the clock because the enzymes are only effective for approximately an hour. I would say for the past year that meals with Bryce last 45 mins to an hour on average. Three meals a day...and yea that is a lot of time spent on pleading with a kid to eat. Of course there are those occasions that he actually eats for us, which we praise him for so he knows it's a good thing.

Since Bryce's weight has gone up and we have a little "wiggle room" as of now we are going to try limiting Bryce's eating time to 30 mins and under. Bryce has got to learn to sit down and eat when it's time to eat. Especially with him heading off to Kindergarten next year. He is going to have to get down to some eating business since kids usually have 20 to 25 mins to eat lunch at school. We are also going to try giving him only one item on his plate at a time starting with the item that has the most calories. If for some reason Bryce loses weight from now until November then we will sit down and discuss options, one of which is putting him on Periactin. Thankfully his doc feels the same way I do about Periactin; she really doesn't want to put him on another medication unless absolutely needed. (Periactin is an allergy drug that can increase appetite. It can also causes irritability and drowsiness amongst others so really it's a matter of weighing the pros/cons/side effects). So we will see how things go. I just wish Bryce could understand the importance of this all so we could just eat our food and move on! He is getting there...so hopefully he will be able to mentally grasp this concept in the next year or two. 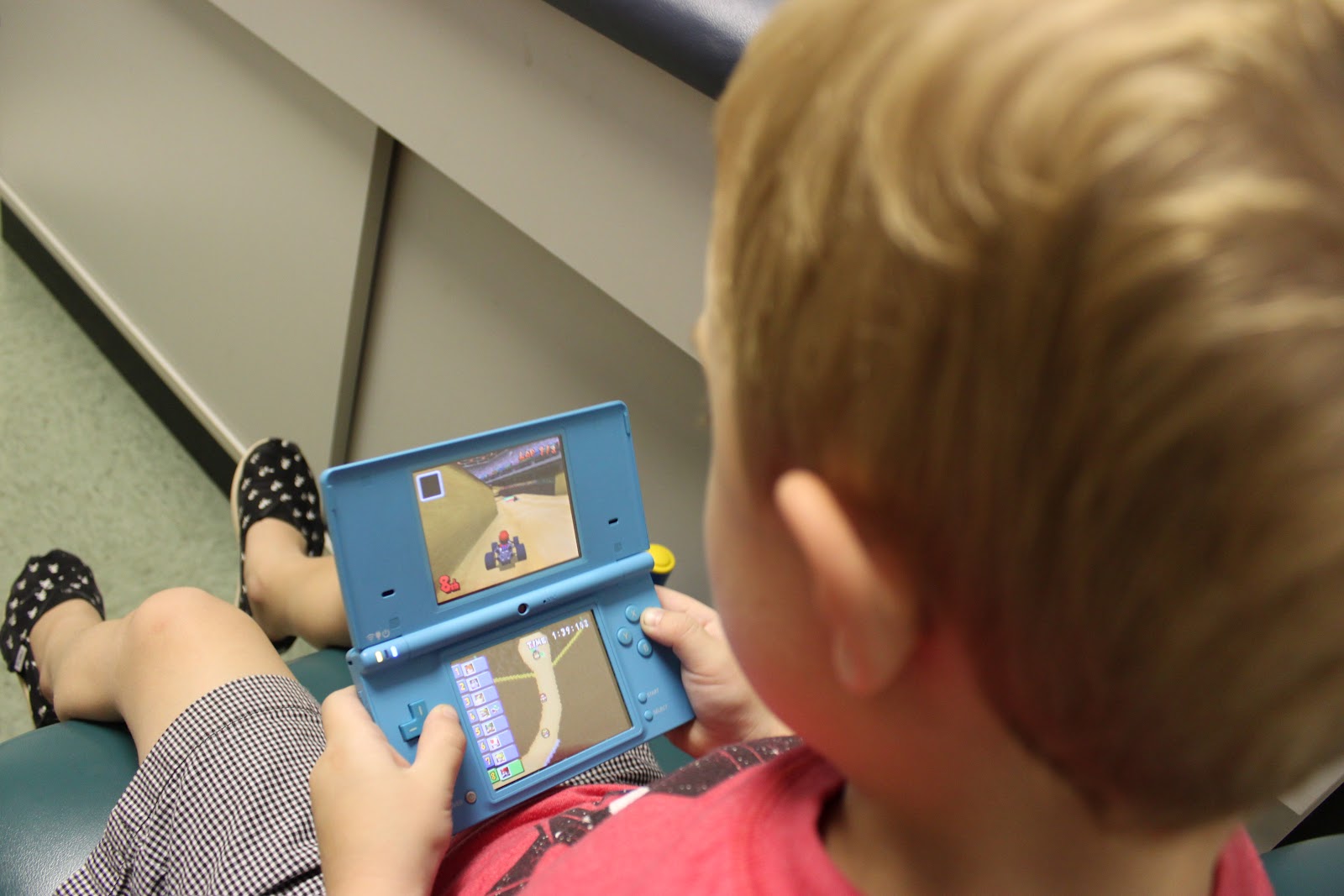 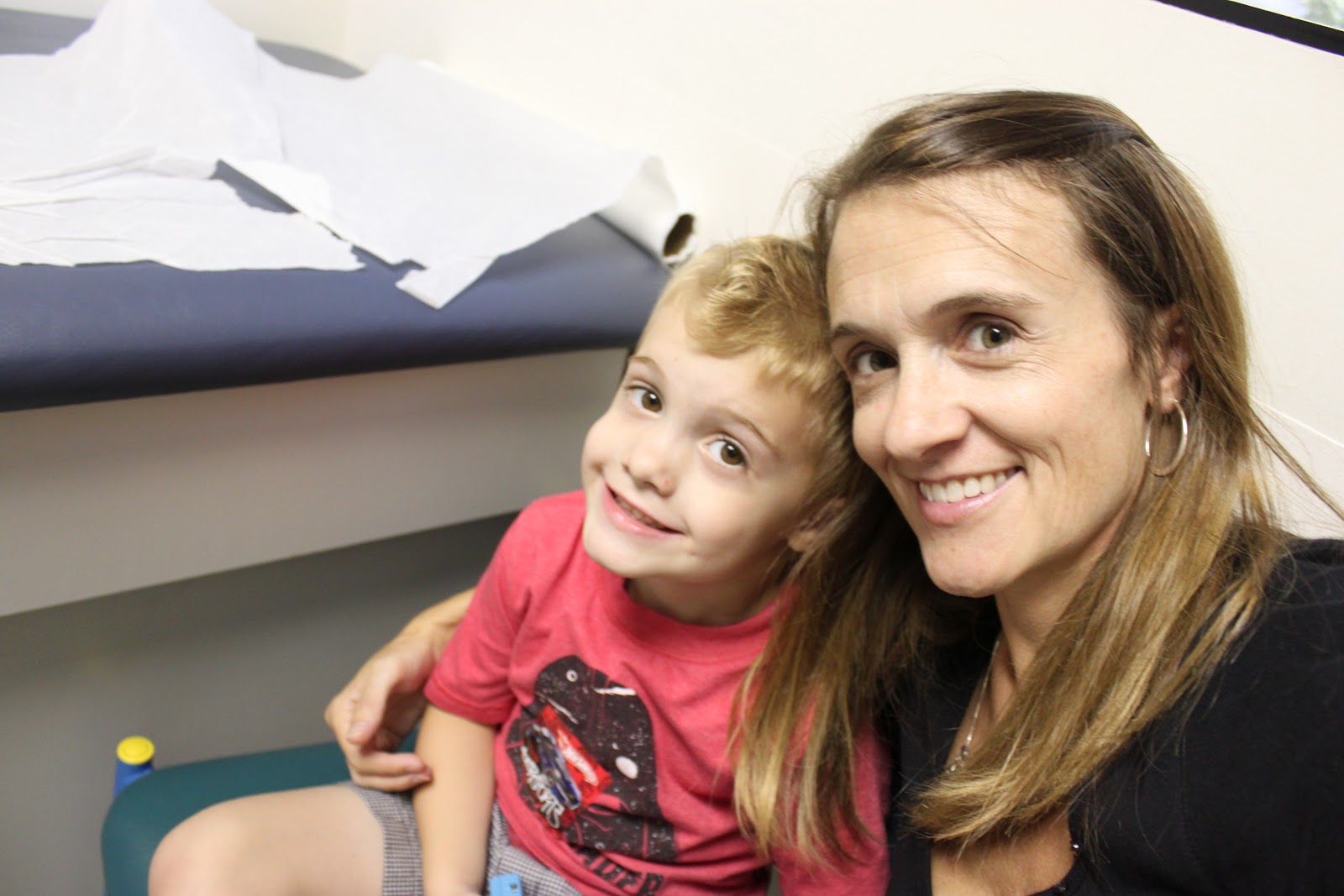 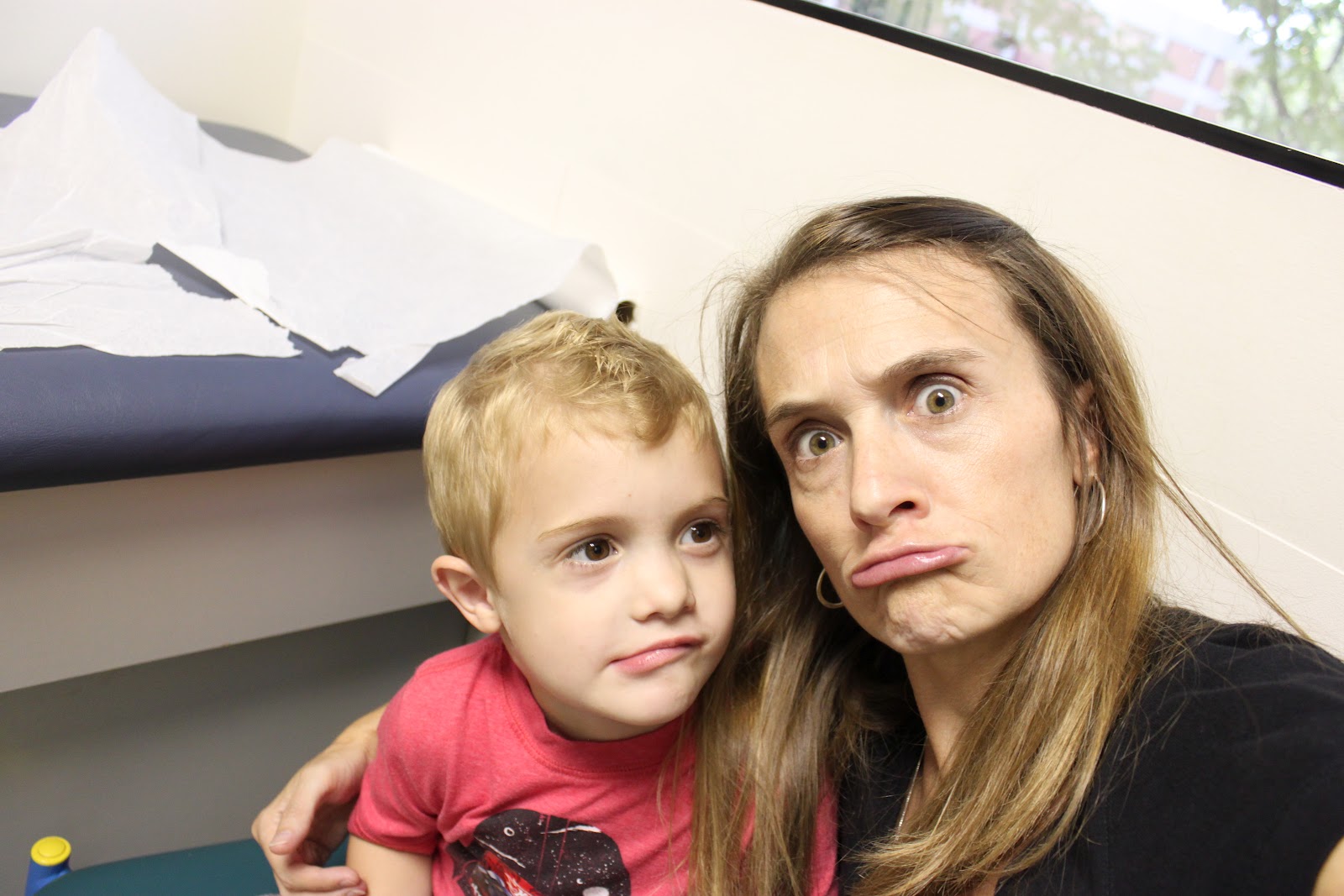 I did get a little nugget of news from our NP. Just this past week she met with a team at Emory (where the adult CF center is located in Atlanta) and they discussed the trial for Kalydeco and those with the G551d that are ages 2 - 5. Well...she mentioned us during the discussion as a possible candidate for the trial! Of course we would love for Bryce to get in this trial so I told her that we are a definite yes and to go ahead and count us in if needed. We would jump at a shot of helping figure out the dosing for Kalydeco in Bryce's age group. A chance at getting our hands on Kalydeco, yes please! So for now we get to wait...
Our NP has 2 patients already on Kalydeco around the ages of 9 and 12 that are both doing awesome with Kalydeco and are feeling GREAT!! One of the patients has even started to gain a little too much weight and might need an enzyme adjustment. Always love hearing success stories! 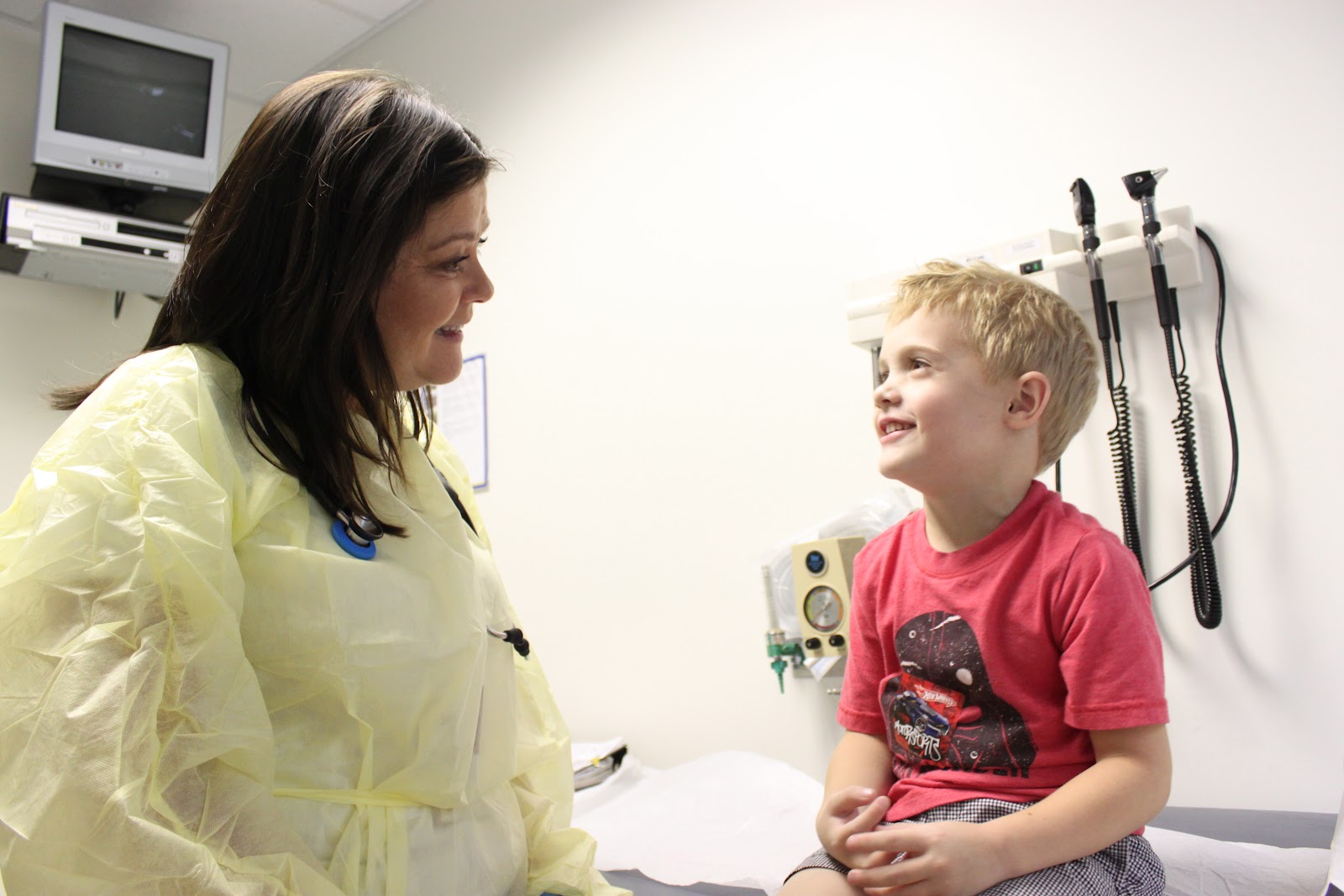 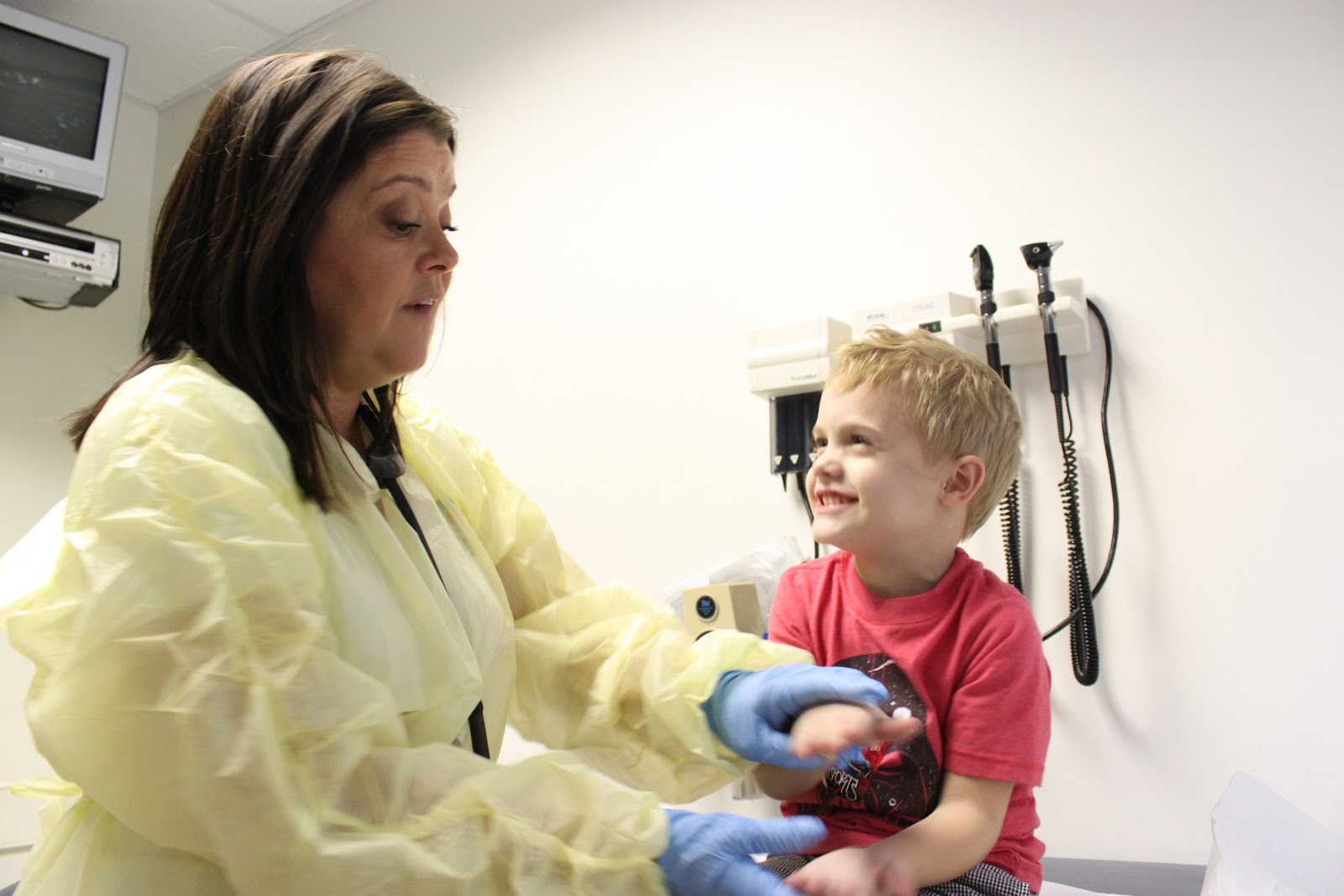 Our NP showing Bryce how the vest shakes his lungs so he can cough out his mucus.
We are still working on the whole "huff cough" thing.
He totally didn't get it, but thought it was super fun that she was shaking his hands really fast.

Now we wait a week or so for those culture results. Please pray for a clear culture and continued health.

****
When I told Bryce to pack up his cars because it was time to go he was not happy to be leaving.
He said, "Can we come back here tomorrow?"
He seriously loves going to clinic!

Is it super fun to have a child that needs to attend clinic for a chronic disease ever quarter? Of course not, but I'm happy that Bryce enjoys going to see his CF team and equates his visits as positive experiences. We try to continually show him that having CF requires work, but it's not a doom and gloom diagnosis. We do not hide the fact that Bryce has CF from him nor anyone else for that matter. It's a part of our lives and we want to make sure Bryce knows how important it is to take care of himself so when the time comes he can easily take over the reigns of his care. I am thrilled that he has such an awesome group of people working with him. A huge high five to our CF team at CHOA Scottish Rite.
You guys truly ROCK!
Posted by Jen at 9:53 AM
Email ThisBlogThis!Share to TwitterShare to FacebookShare to Pinterest

He is such a rockstar! Love that he goes with it at clinic. Congrats on the awesome weight and BMI! Go Bryce. Mom and Dad certainly get a huge pat on the back for that one! Getting those kiddos to sit and eat these days is getting harder for us too! Thanks for sharing your visit through awesome pics! He is totally rockin' it!

Hi Bryce
My name is Jenna, you are a brave, courageous fighter and an inspiration.
I was born with a rare life threatening disease, and have 14 other medical conditions, and developmental delays.
I wrote this poem
Each of us are Special
Each of us different,
No one is the same
Each of are us are unique in our own way,
Those of us who have challenges, we smile through our day.
It doesen't matter what other's say
we are special anyway.
What is forty feet and sings? the school chior
http://www.miraclechamp.webs.com