I'm a bit late posting this, but on Monday of the past week Bryce and I made our quarterly trek down to CHOA for our first clinic of 2014. It was a pretty uneventful clinic, which means...Bryce is looking awesome! CHOA no longer allows us to take pictures with their employees in them because of HIPPA laws which puts a damper on some of the photos I usually take so there aren't too many CF "action" photos this time around. 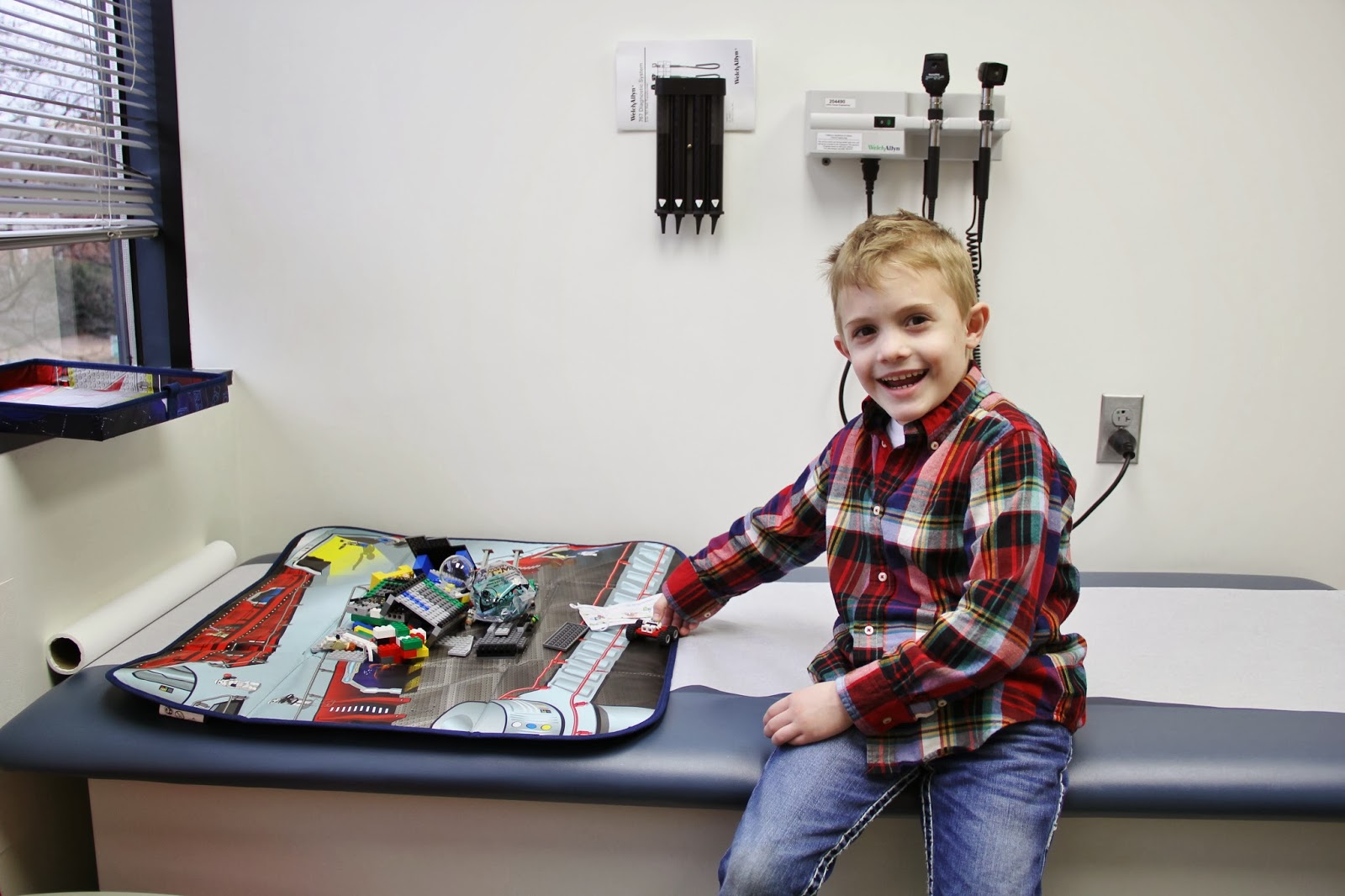 Clinic always starts with a throat culture. He handles this like a pro. He is so used to it, having his throat swabbed doesn't even phase him. We of course are waiting on the culture results. I will probably hear something by next week. The last 3 cultures he has grown Staph. This isn't a huge deal and our clinic doesn't treat it unless he starts showing symptoms. In November he developed a nasty little cough so his clinic put him on a 14 day cycle of Bactrim. I love this stuff...it clears out a cough like a champ. Well...the pesky little cough came back towards the end of December so they called in another 14 day cycle of Bactrim. They said the cough was due to the Staph so hence why they treated it. At any rate we have been cough free since then so all is well on that front. As always we ask for prayers for a clean culture. 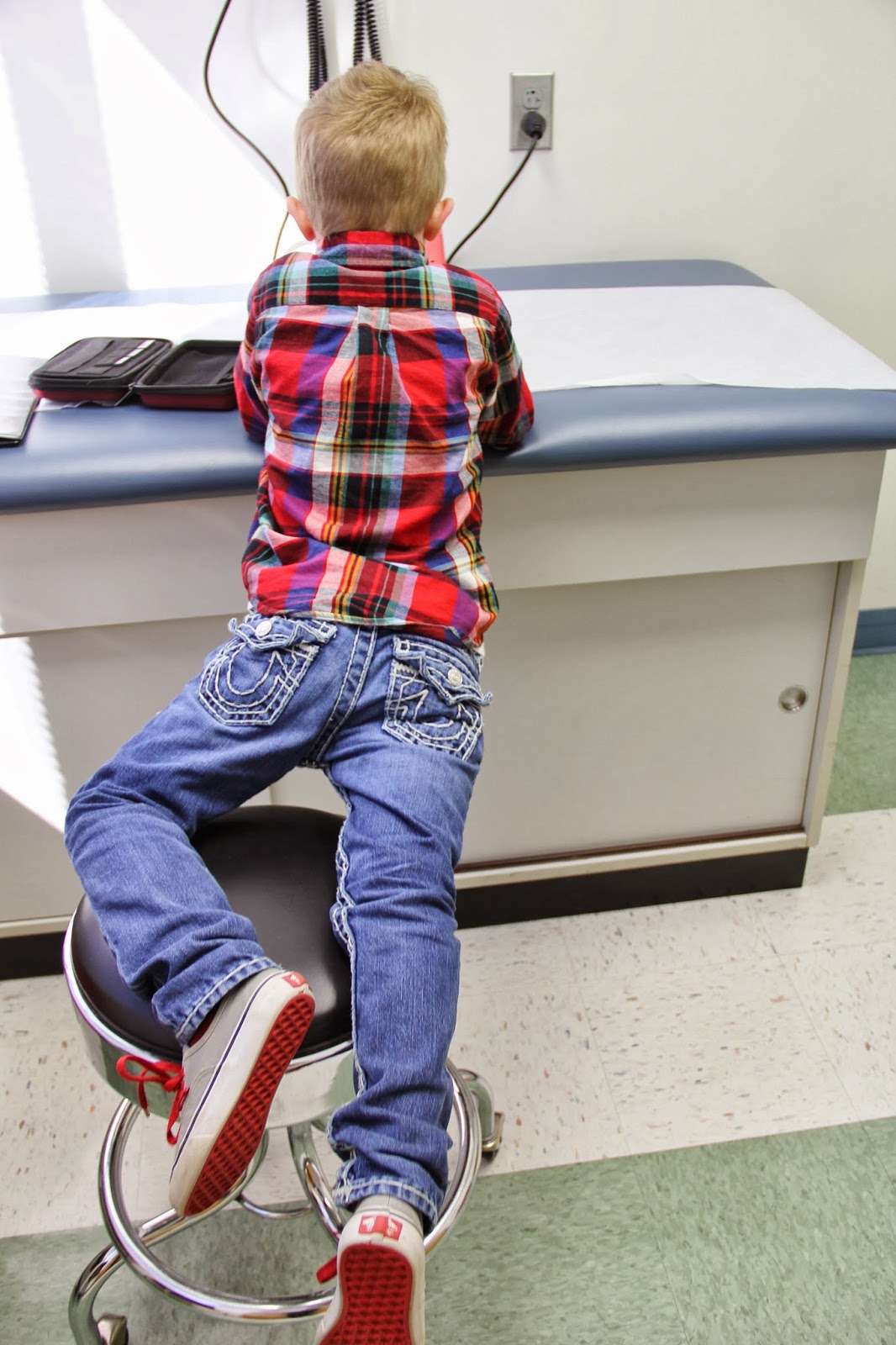 I would love to tell you Bryce's weight because that is always a huge focus when we go to clinic. Well...I didn't ask his weight after they weighed him because they always write it down on our status sheet. Unfortunately I didn't realize his weight wasn't written down nor was his height until after we were home; however, I did see his height when they took it and he is at 45". They checked him off in the "Green Zone" which is where we want to be so I'm assuming his weight (and BMI) is where it needs to be. 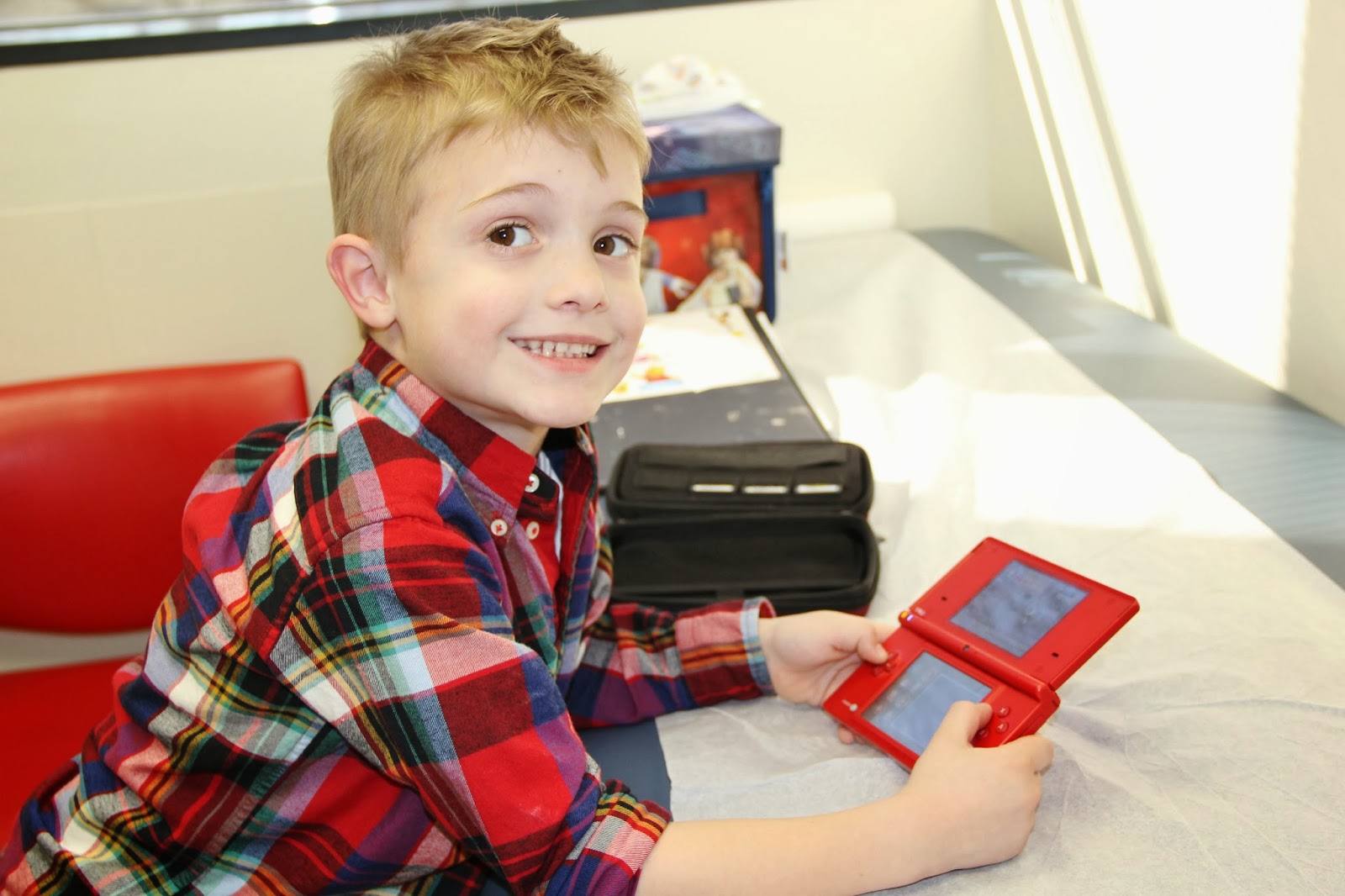 Bryce did have blood draws this visit. We usually don't have blood draws in February, but he had to be retested because his liver enzymes were elevated at our August clinic so his GI doc requested he be checked again in 6 months so hence our February blood draw. As usually he handled the draw like a champ. He almost shed a tear when the poked him, but once he realized it didn't hurt so bad he was a rock star. They only needed one vile so it was a quick process. (If you want to know the definition of elevated liver enzymes you can click on "liver enzymes were elevated" above. It will take you to the Mayo clinics definition.) 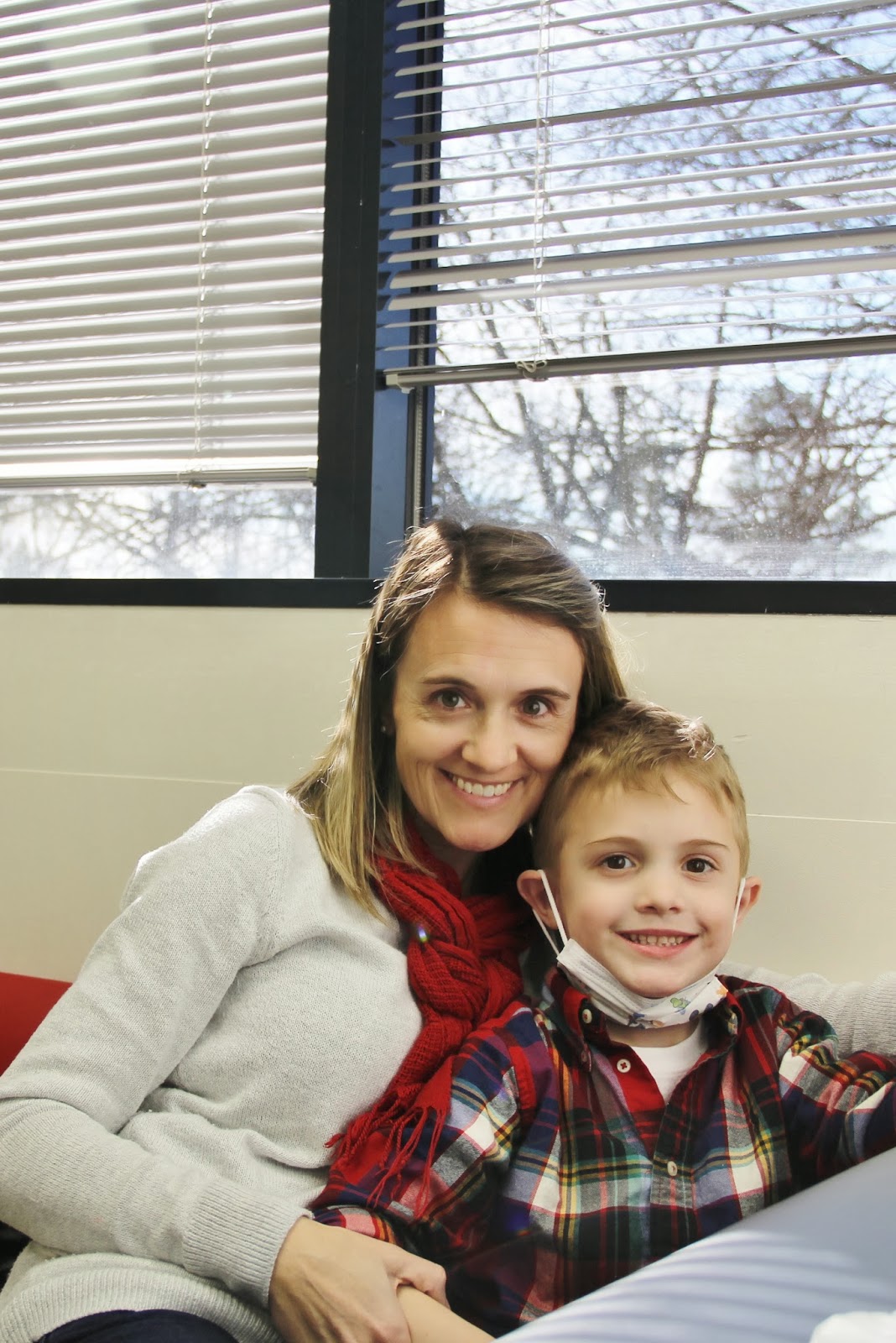 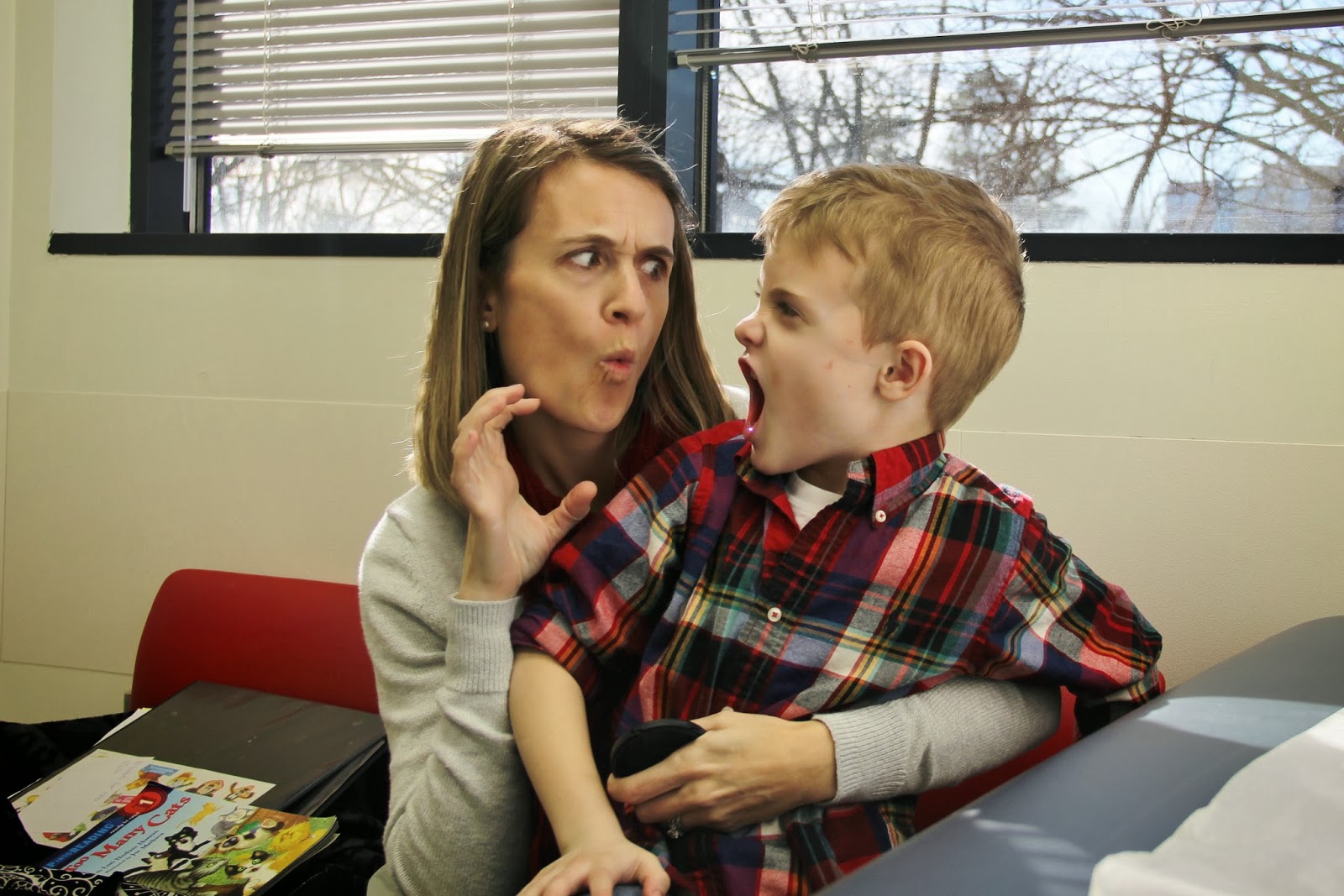 He had a go at PFT's again. He is still new at this so he hasn't quite gotten it down. I don't think he fully gets taking a deep breath in to fill his lungs up and then blowing all that air out as hard as he can. Let's be real...he gets slightly distracted because he is watching a computer screen with either birthday candles or a chicken on the screen. His goal is to blow out the candles or move the chicken across the screen. If either of these pictures move on the screen he stops in mid breath and says, "I did it! I moved it!" His first go at PFT's was 100%, his second go was 85% and this time around he blew a 98%. His pulm doc was pleased and said with time and more experience she feels his number will actually go up. 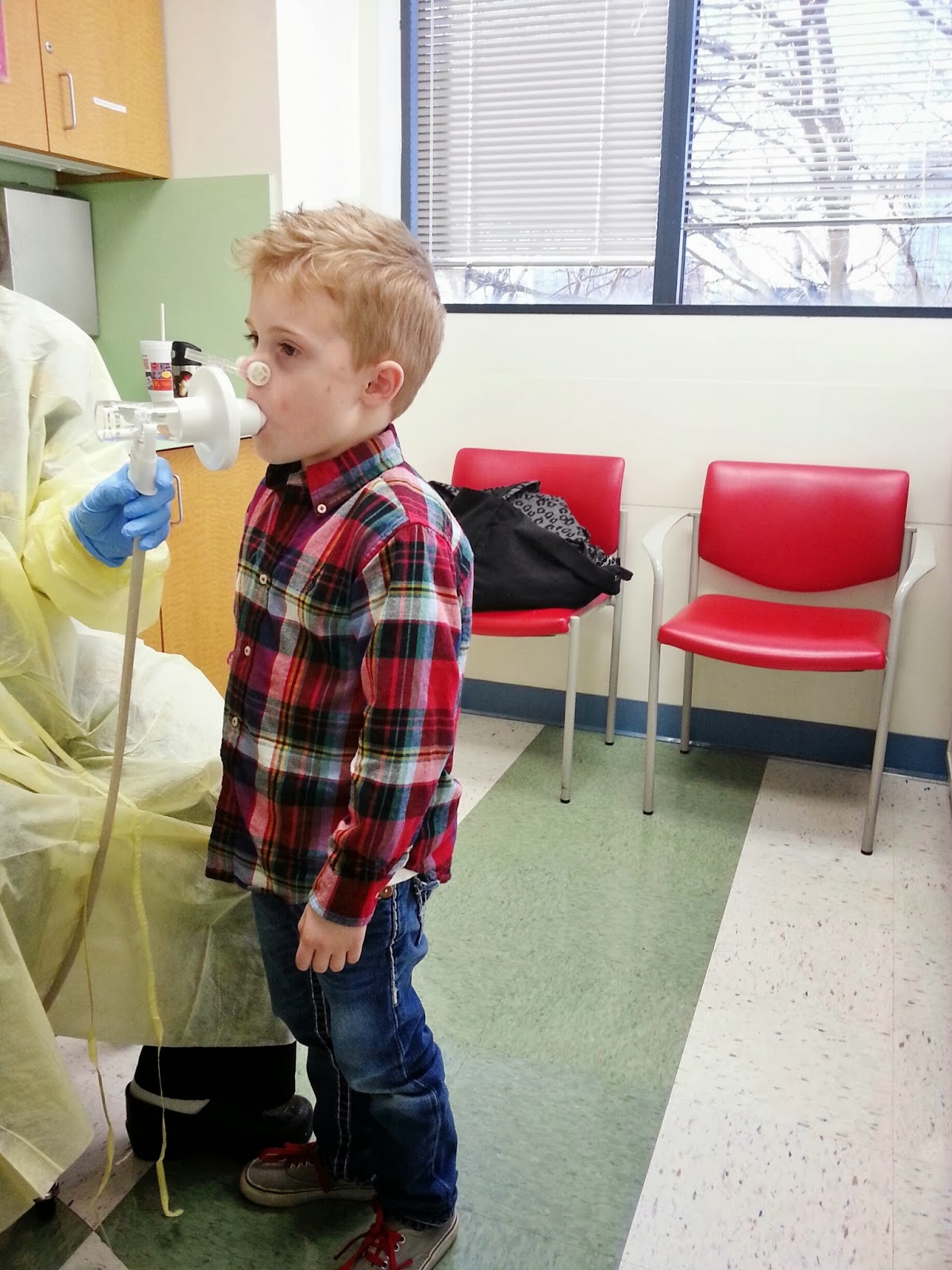 I promised our respiratory specialist she was not in the picture so this is the only action shot I got all visit.

Not too much else to report. I did sign off for him to be part of some research they are doing at Emory. Emory is working on collecting samples from CF patients in order to study them and see if they can pin point signs of infections BEFORE they happen so they can start treatment before the infection(s) set in. Get a head start on the battle if you will. Does that make sense? Anyway, I gave permission for them to use his blood or any other samples they take from him. We are all for helping the greater cause so whatever we can do to help! Our next clinic is early August, which I am looking forward too. Why? Because it will be warm. I am OVER this weather. Brr! 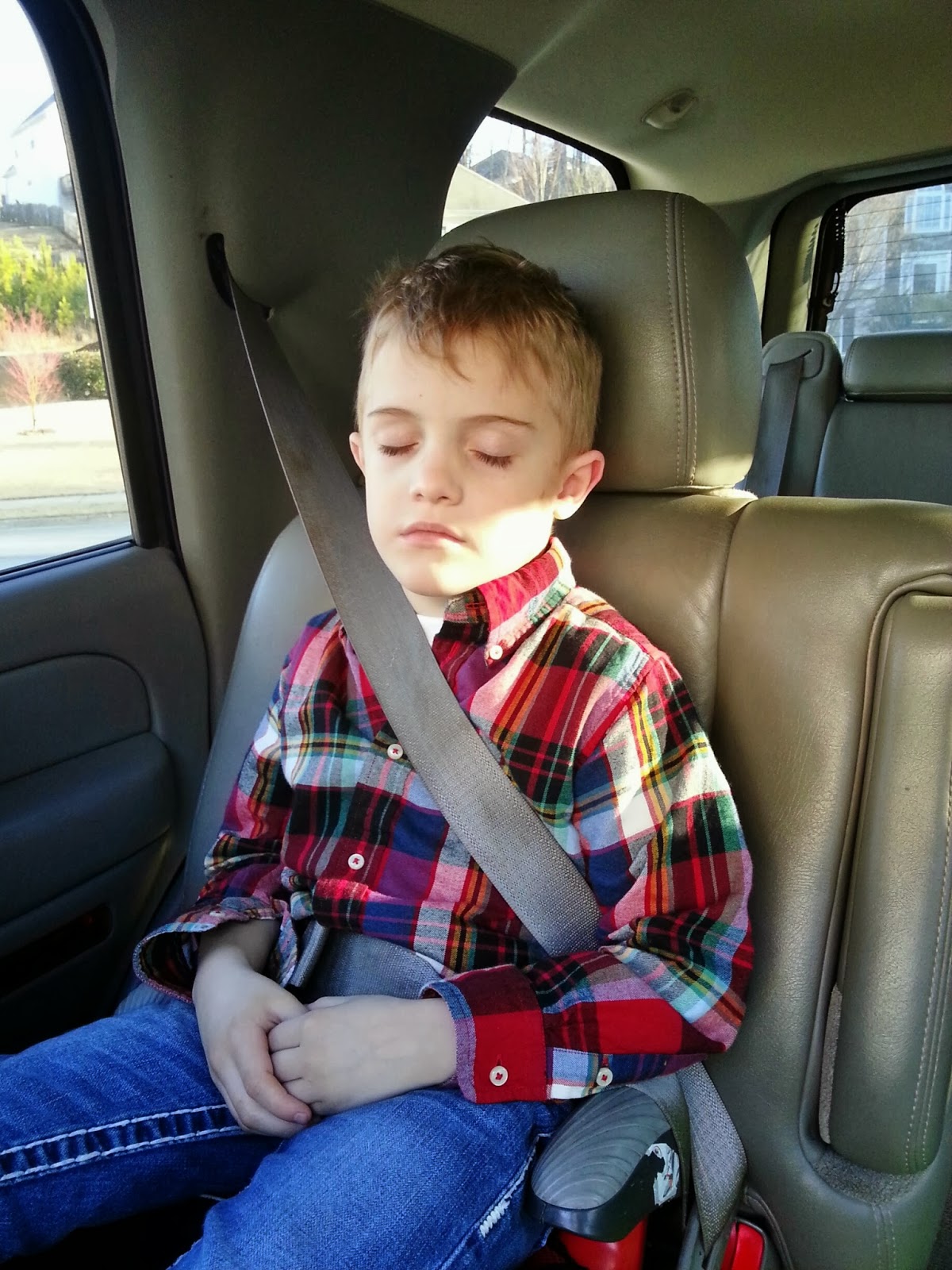 One last thing before I go. Bryce had dress as a Community Helper Day at school. He dressed up like a PE teacher / volleyball coach so basically he dressed up like dad! He looked pretty legit, but mostly he was super cute (like his dad). He was the lone coach in a sea of police officers, fire fighters and doctors. 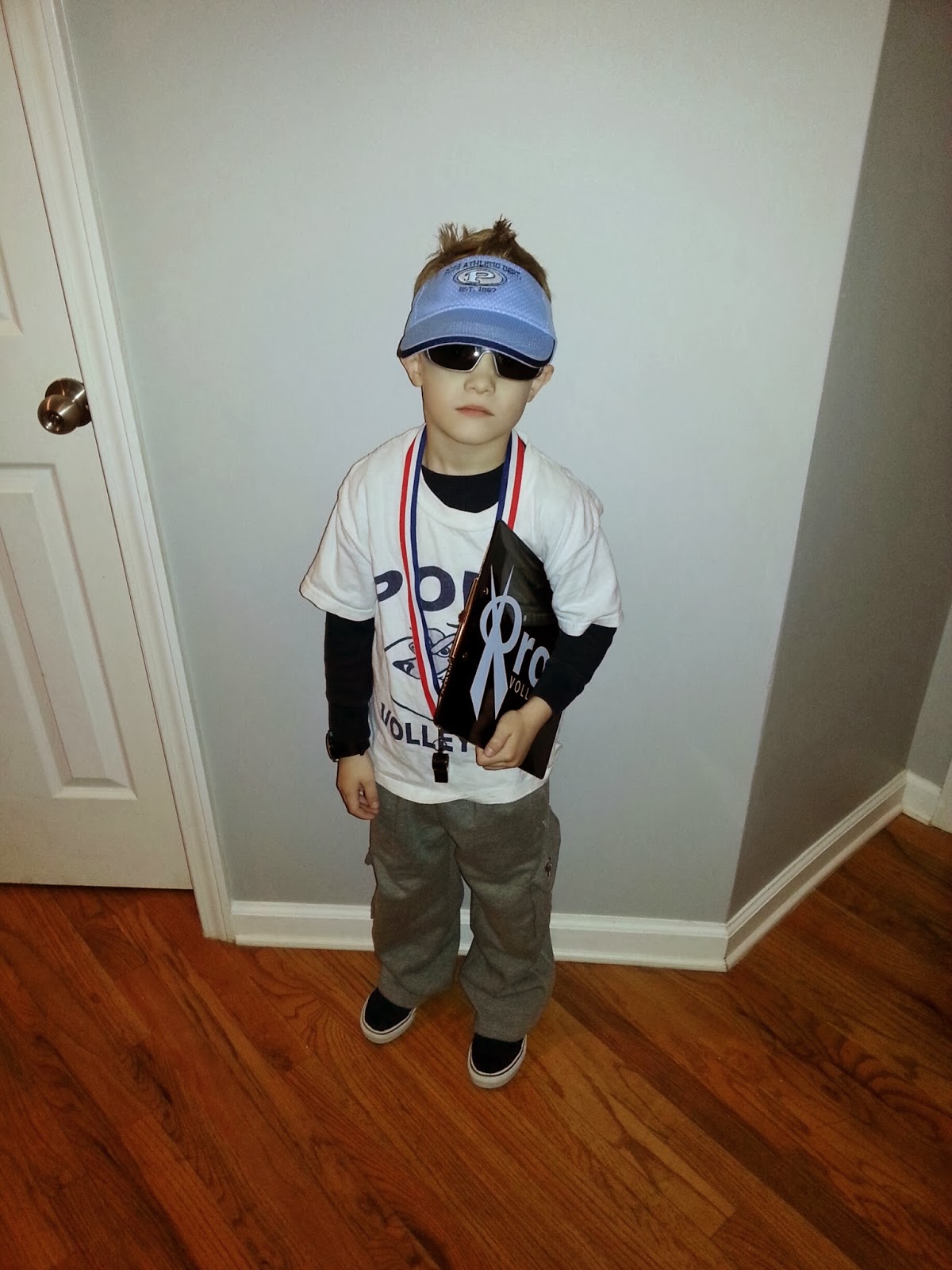 Posted by Jen at 8:14 AM
Email ThisBlogThis!Share to TwitterShare to FacebookShare to Pinterest

Of course Bryce did well at his visit...as you said he is a rock star! He also has rock star parents and 2 adorable sisters.