Hard to believe that it's already March!

The beginning of the year has been a blur. Back in January Sydney's team played in the Atlanta College Showcase. It was a wet weekend so they were only able to play 10 minutes of their first game. The rest of the games went pretty well considering the girls were playing up a division. I don't remember the outcome of the 2nd game, but they won the 3rd game. Since it was raining I didn't bother taking any photos.

At the end of January, Jordyn was inducted into the Jr. National Beta Club! What an fantastic opportunity for her! They had an assembly at the school that included a pinning ceremony, which us parents were able to participate in. I didn't know this so I was glad I decided to wear something other than my usual work out clothes. I know I've said it a million times, but I am so proud of Jordyn. She puts 100% effort into her school work and it pays off. I truly admire her dedication to school. 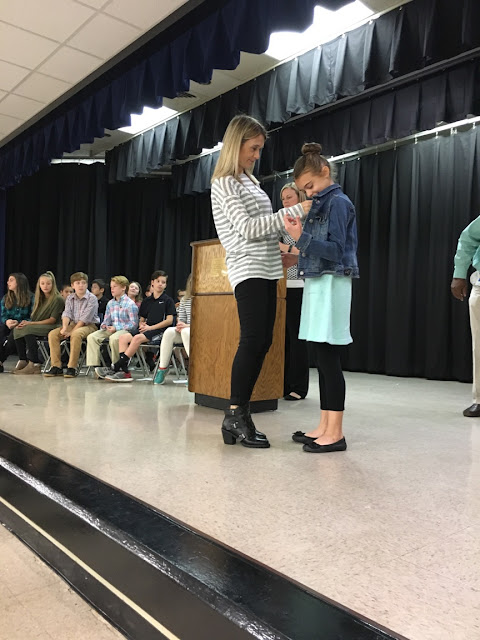 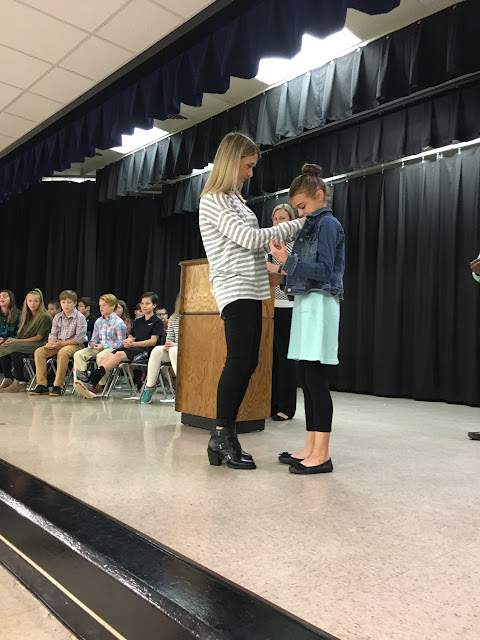 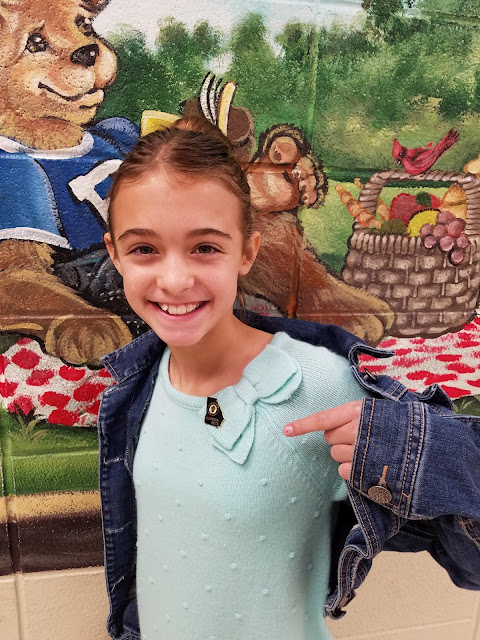 Once February rolled around we were in the groove with school and regular soccer practice schedule was back in full swing. Preseason means preseason soccer tournaments. Bryce's team played in the SSA Spring Classic. They lost their 1st game, but won the 2nd and I can't remember the outcome of the 3rd game (woops). Bryce is still in love with the keeper position so he typically plays the first half in the goal and then gets to play the field some the second half. I'm pretty sure some of the parents would love for Bryce to play in goal the entire time, but he needs to keep up his field skills as well. 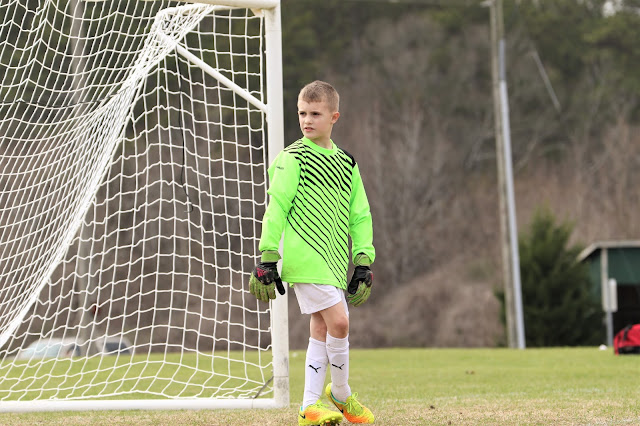 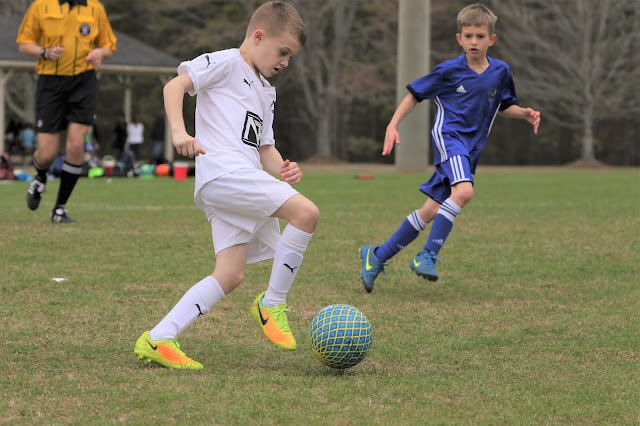 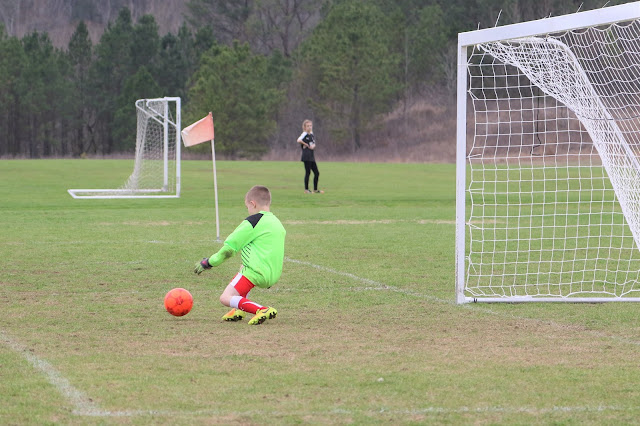 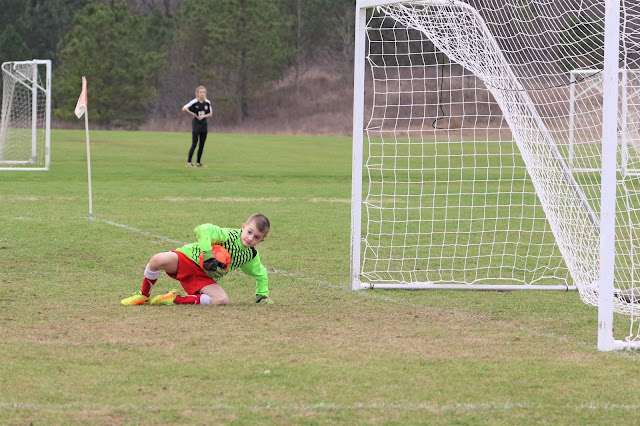 Here's a cute photo of Jordyn dressed up as Rosie the Riveter. Her class finished up their study on WWII and to celebrate the kids were allowed to dress up. There is a group picture of all the Rosie's and it is pretty fantastic, but I don't want to post it since I don't know all the kids in the photo. 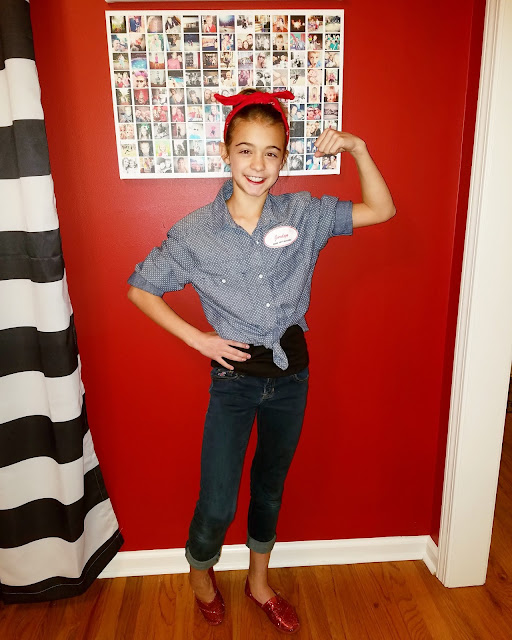 Bryce had his first clinic of 2017 on February 18th. Things went very well. His weight went up a good amount (he is hungry all the time it seems) and his height went up a little putting Bryce at 58% BMI, which puts us in the coveted "Green Zone". His PFT numbers went way up compared to the last clinic so that was the biggest news of the day. He did so much better blowing in to the machine. We are going to continue with Albuteral before each of his two daily vest treatments and start working him more on his Aerobika device.  The Aerobika is a small hand held device that can serve as another means of chest physio. At his next clinic in May his team is going to try him on hypertonic saline inhaled through the neb, which will then be rolled into his daily maintenance twice per day. This means sterilizing neb cups daily. 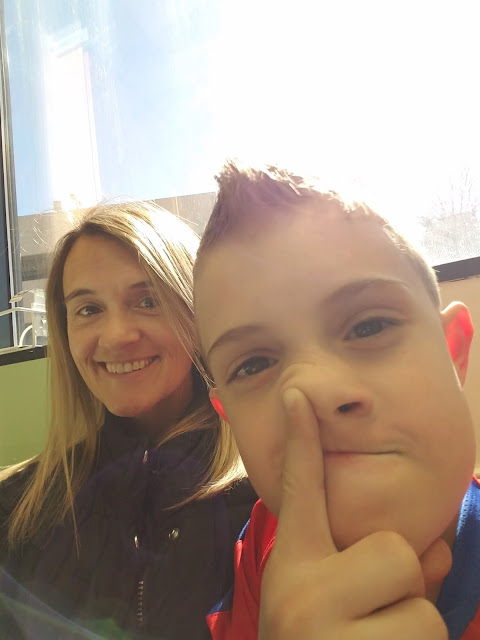 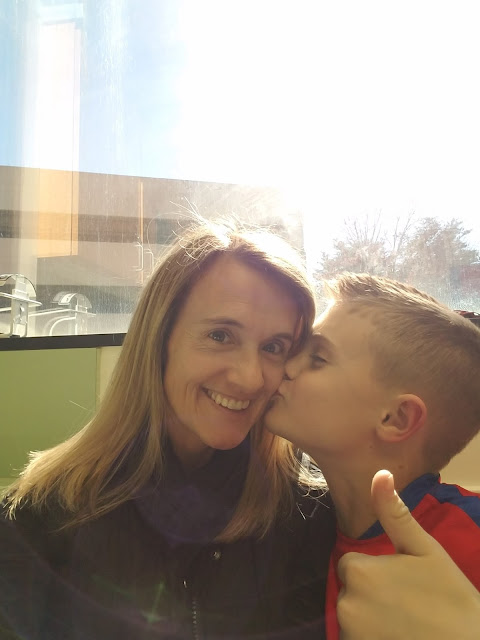 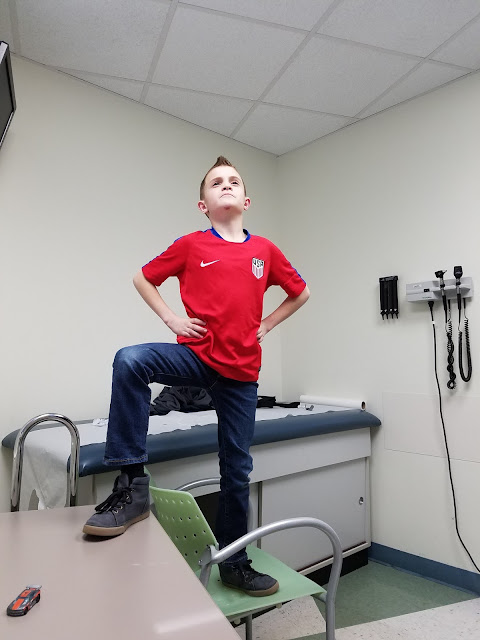 Winter break rolled around, which we were really excited about because we had plans to go with Bryan to a beach volleyball tournament in Gulf Shores towards the end of the week. Well...silly me thought I had another weekend in the month and didn't even realize until a week before that Jordyn was already committed to playing in a soccer tournament. It was such a disappointment when I figured out that I had double booked us so Bryan headed to Gulf Shores without us. For the tournament weekend Bryce spent an entire weekend as an only grandchild with ALL the grandparents and Sydney went to a friends house for a birthday celebration. 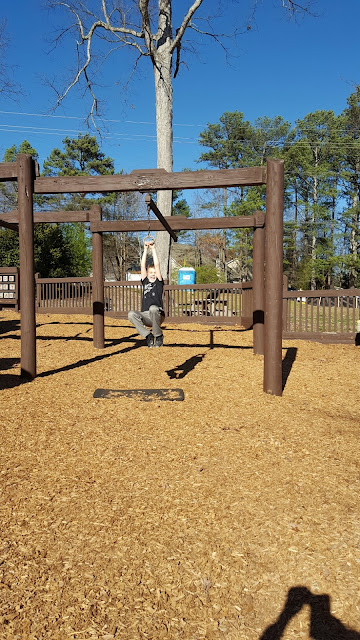 Jordyn and I traveled back and forth all weekend to Conyers (that's a hike) for the RYSA Kickoff Classic. Jordyn plays on a u12 team and they roster 11 girls. For this tournament her couch entered them in the u13 division so they could get their first experience playing 11 v 11 and since we only have 11 girls on our usual team, we scooped up some guest players for the weekend. Turns out the girls got the hang of 11 v 11, handled the big field with no problem and... WON the division!! It was so fun and exciting to watch. The girls won the first game and lost the 2nd game on Saturday. They came back on Sunday with a vengeance. They won the first game 1 to 0, which sent them to the finals. They won the final game 2 to 0. What's crazy is that some of our guest players were playing up TWO age divisions. I can't wait to see how this team develops over spring season. 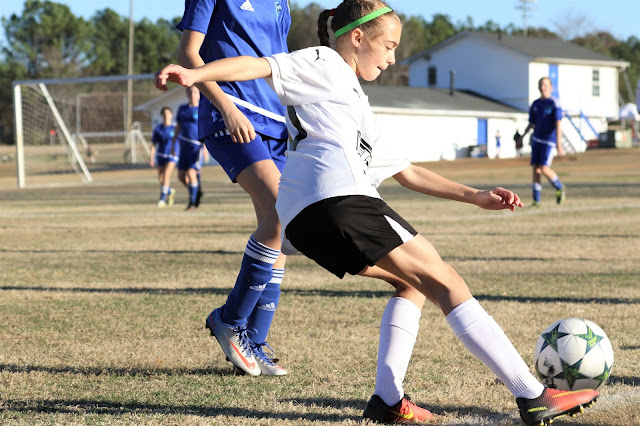 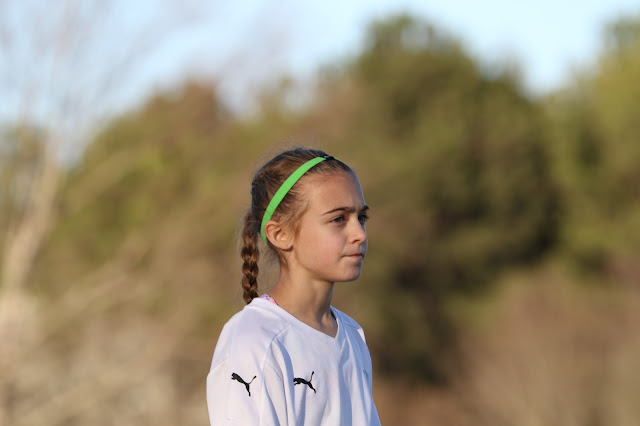 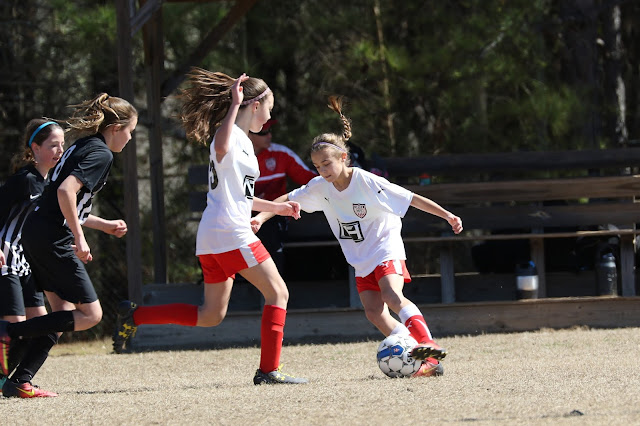 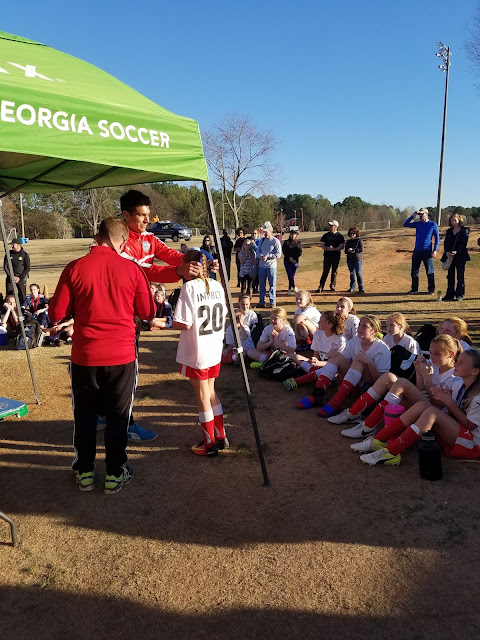 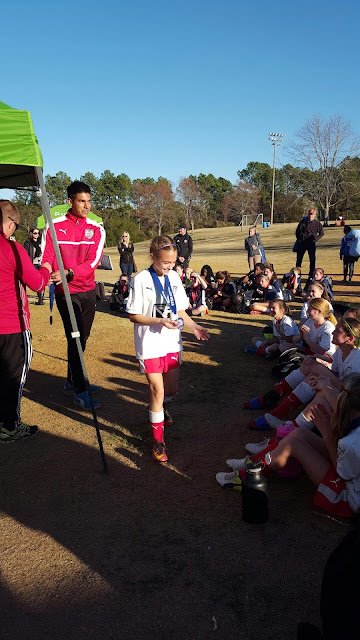 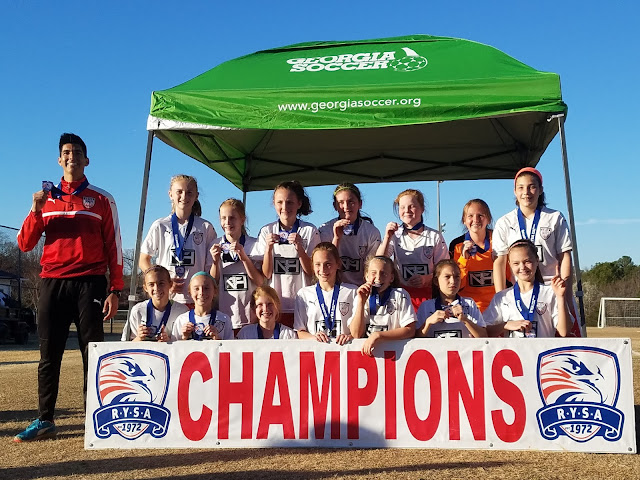 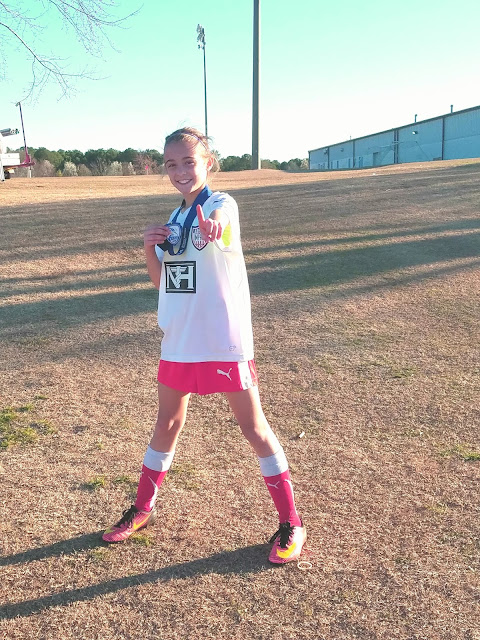 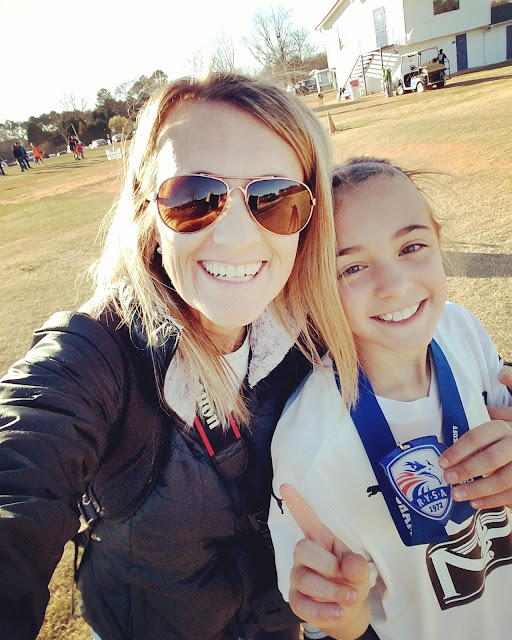 We are back to the  school grind this week. Soccer season officially starts this weekend so life for the next month will be absolutely insane. Our eyes are set on spring break when we head back to our favorite vacation spot. Wonder where that could be?

There is also a big change happening at the Jones house, but I'm not quite ready to share the details because I don't know all the details yet.
The hint is in bold.

Posted by Jen at 7:14 PM
Email ThisBlogThis!Share to TwitterShare to FacebookShare to Pinterest