We took the kids to see Toy Story 3 yesterday. Such a cute little movie. We were going to take the kids on Saturday for Sydney's actual birthday, but since Pool Friday was a rained out bust we decided to do the movie a day earlier. This was Bryce's first movie theater experience. I didn't expect much from him considering he is 23 months old. He loved it! He sat in Bryan's lap the whole time and would talk to the screen and point at it. He ate all his popcorn and drank his juice box. At one point in the movie I looked over and watched Bryan and the kids totally enthralled in the movie so I took a video. They were so into the movie none of them, including Bryan, had no idea that I took a little video.

The video I shot...a little dark, but you can still see my movie watchers. 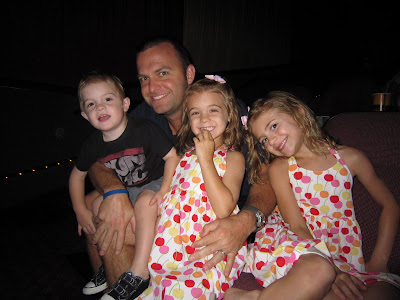 All smiles after the movie. Love these special people more than they know.
Posted by Jen at 7:55 AM
Email ThisBlogThis!Share to TwitterShare to FacebookShare to Pinterest