Bryce woke up bright and early this morning. Before turning on the Disney Channel and starting our morning routine of diaper changes, vest session, teeth brushing and breakfast, Bryce and I had snuggle time. Just me and my boy (Jordyn was still sleeping). It's one of my favorite times of the day because my little man is a super good snuggler. This morning Bryce decided in between hugs and kisses from mommy he wanted to tell knock knock jokes. So - without further ado, here are the knock knock jokes Bryce told this morning.

Bryce: Knock. Knock.
Me: Who's there?
Bryce: Hello! I Bryce!

I found that to be pretty funny because he actually said gulp and then swallowed. 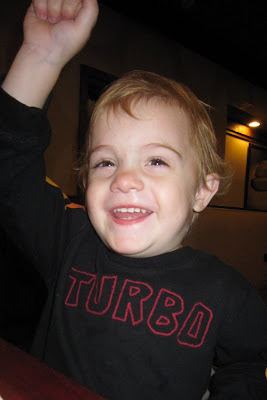 Love love love this age!
Posted by Jen at 10:55 AM
Email ThisBlogThis!Share to TwitterShare to FacebookShare to Pinterest

Bryce is such a cute and FUNNY little guy. It must be fun to have your youngest be the boy. Funny how a 2 year old knock knock jokes can make you laugh harder than the real ones!!

Well they made me laugh too :)He's adorable!