Yesterday we had our first clinic visit of the year.
I will rate the visit as "just ok".
The past 3 clinics Bryce has gotten rave reviews from his CF team. This visit wasn't met with the same enthusiasm.
It was more of a, 'he's still doing well, but we are cautious'.

Bryce's lungs are clear as a bell which is wonderful news. This is pretty typical for him though. (Knocking on wood as I type...) 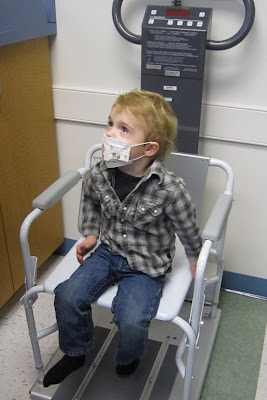 Bryce's big struggle from the get-go has been gaining weight. At our November 2010 clinic we were over the moon excited that he finally reached the Body Mass Index (BMI) goal we had set from the time he was diagnosed.
Sadly, since November Bryce has lost a pound.
His weight is 30.4 lbs. They wanted him at 32.2 lbs by this visit. :/
I was bummed and a little shocked to hear he had lost a pound. Honestly, I expected him to plateau out on weight, not loose any. I know a pound doesn't sound like much, but it sure makes a difference in calculating weight percentages and BMI's. He hasn't grow in height either; therefore, not growing in height and losing a pound seemed to be a little concern to our team. Like I said, he is still doing really well, but it scared me some that everyone who walked in the room had this very cautious concerned tone. 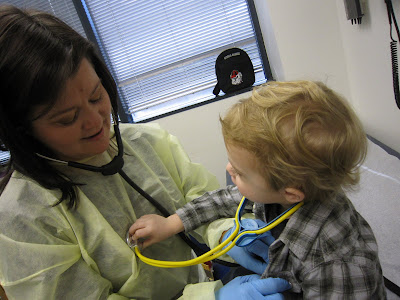 I did explain that Bryce is doing what I believe all 2 to 3-year-old kids do. Some days he eats and some days he doesn't. One day Bryce will eat everything we give him. It's like he can't get enough food. Then maybe for a few days he doesn't eat much. Our girls were this way when they were Bryce's age so I really haven't thought much of it. Not to mention that Bryce is a ball of energy.
He is go go go when awake.

He rarely sits still and is constantly moving, jumping, climbing, running and of course getting into things he shouldn't. The only time Bryce sits still for any length of time is if he is sleeping or if he is on the vest. 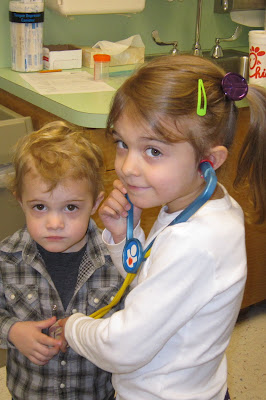 So my own personal conclusion is Bryce is such a busy body he doesn't have time to eat. There are too many fun things he could be doing instead of eating. Between not having time to eat (less calories) and all of the energy he exerts in a day (losing calories) it has resulted in weight loss.

Bryce's GI doc has prescribed him Periactin. This medication is typically used to help with allergies; however, an increase in appetite was reported by 40% of patients that use it. So for the next 3 months (until the next clinic) we are going to try this medication to see if makes a difference in his appetite. He will not be on this medication daily...it will be more for days when he hasn't eaten much for breakfast or lunch. I'll give him 1/2 teaspoon (3 mg is the full dosage) before his nap in hopes that by dinner he will be more hungry. On days where he has eaten well he will not need to take the medication.

I'm not one for turning to medication to solve every problem, especially after doing a little research on this particular medication. I'm willing to try Periactin as a last resort if I have had a few days of him refusing to eat a reasonable amount of food. If I see a difference in his appetite we can go from there, but before we go that route I would rather try getting Bryce to eat what we give him in the first place. 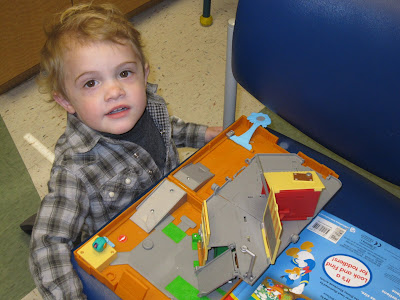 Getting our little man to eat has definitely been a battle for Bryan and I lately. There have been dinners where we are literally forcing Bryce him to take bites of food. We have even resorted to bribing him with a piece of candy or something sweet just to get him to eat a few bites of food. Another problem I am having is Bryce's inconsistency with what he WILL eat. One day he will mow through sometime and the next time we give it to him he won't even touch it. It can be very frustrating. I think over the past few months I have often let him win when it comes to eating because I just don't have it in me to fight with him.

Looks like this little momma has to step up her game!!
To my CF mommy friends...what is your child's favorite high calorie meal and/or snack??
Would love to know to see if I can get some ideas of new things to try. 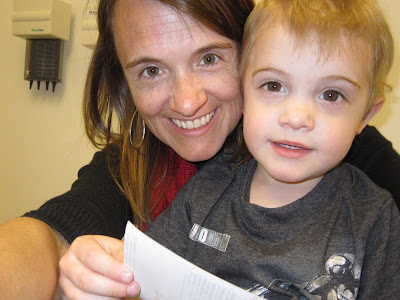 With all this said, Bryce's health is doing very well. They said to keep doing what we are doing, but step it up in the eating department. You wouldn't think he was having weight issues by looking at him because he is such a solid guy.

Now we get to wait for the culture results. I'm not going to lie, I'm a little nervous because he had a goopy stretch (snot and coughing) from Thanksgiving through Christmas. I couldn't help but worry what could be growing in the goop he had.Waiting on culture results seems like forever, but we should know by next week sometime.

Oh and I almost forgot. Bryce got the green light to register for Preschool!! We have been told since he was diagnosed that we would worry about preschool when he was 3. He turns 3 this summer and registration for preschool starts next month so I wanted to see what the team though about him going to school.

What am I going to do having both my girls in Elementary school and Bryce in preschool 3 days a week for a few hours??
Oh, I know...I can actually get some work done!
Posted by Jen at 8:13 AM
Email ThisBlogThis!Share to TwitterShare to FacebookShare to Pinterest

Thanks for the update. Peter is on Periactin and it has worked great. I'd be interested in the research you found that makes you nervous to give it.

As far as feeling nervous for those culture results, I know how that feels. For those of us who have battled Pseudo, it's always something you dread you're going to have to do again.

Tips on eating (I really need to do a post about this). Here are Peter's favorite calorie boosters: Butter -- it's our best friend. You can put it on anything! Dips -- ranch, ketchup, fry sauce, ranch. If it can be dipped, we encourage it! Carnation Instant Breakfast (CIB) with whole milk at every meal -- we used to use Ensure, but CIB is cheaper. Cheese -- Peter loves to cut it up (with a butter knife) into smaller pieces and eat it.

Don't worry! Getting the food thing down is hard, really hard with an active boy. Remember to make those first bites of a meal REALLY count calorie-wise, so if he isn't interested in the rest of the meal, at least he's gotten something!

Hi Jenny,
Just some tricks that we do in our home. I give Ben, Carnation instant breakfast in his milk every morning. Sometimes, I add a splash of heavy whipping cream. On days in which Ben doesn't eat much, I'll make him a milk shake as a snack. I get real ice cream and whole milk and add a splash of heavy whipping cream. He gobbles it down! In the past, I've also added Flax seed oil to his milk. It's full of calories from Omega 3's which is helpful. I dont believe in putting butter on everything to fatten it up, I look for "healthy" ways to get calories in him. Sometimes, all he eats is the milk shake but since it's natural, he's getting calcium and protein. You can also throw in yogurt to make sure he's getting as much as possible. We have tried greek yogurt but Ben is not a yogurt fan. Let me know if you need any other recipes, I have some more and I'm glad you go good news on his lungs and we'll just pray for good culture results.

Bryce is so adorable and he looks great. Sure doesn't look he has some weight on him! I feel like I am always stressed that Madeline isn't gaining enough weight- I guess that us, as cf mamas, always have that thought in the back of our head and it just never goes away.

Madeline loves yogurt. Trader Joe's sells 8oz of yougurt (greek sytle) with 17 grams of fat or YoBaby/Toddler with 4grams in 4oz. We also make lots of trips to McDonalds (nuggets) and Burger King since she gobbles up their chicken. Madeline drinks pediasure for her lunch meal (240 cal/8 oz.) often because she would rather run than eat. She usually chugs it because once she is done I let her play. I find it VERY hard to feed her lunch since she wants to always run around being the crazy ACTIVE toddler that she is! (Sounds like Bryce and Madeline would get along great!)

We also use a lot of favorite TV shows to watch during lunch and breakfast. It works well and she eats. Madeline often sits at the counter with "her DVD player" at the counter during these meals. It seems to take the "focus" off the push to eat and instead she is fcoused on the DVD. The power struggle seems to disolve because she is wrapped up in TV.

We have violated all "rules" with Madeline as far as TV and "pick your own dinner" with kids. To us,we just want her to get as many calories as possible, while still enjoying food. Not sure if others think it is right or wrong, but it works for us..and makes eating enjoyable now.

I have my fingers crossed for a clean culture result. Bryce is cute as ever. Does he need a girlfriend? ;) You are doing a great job, mama.

Sorry I meant "it sure doesn't look like he *lost* some weight!

a new kind of perfect said...

Jenny, second time I visited your blog and I look forward to it in the future. I have a 10 month old, diagnosed with the newborn screen and caught us by surprise. Neither my husband nor I knew we were carriers. Anyway, I'm commenting as I'm stressing over the food issue too. I'm up researching high fat high protein foods and although there is a lot out there, it'd be great to get some CF Mommies to post some of their tips so I appreciate you asking the question and hope to use the input you received for my little man. Will say a prayer that the culture comes back negative. Thanks for taking your time to help those of us a few steps behind...