Do you remember when I blogged about the club Sydney was starting? If not, click here. Well, now that Bryce is older he was invited to join her club.

I don't think things are so well for him and the club.
Yesterday I found this on my bed. 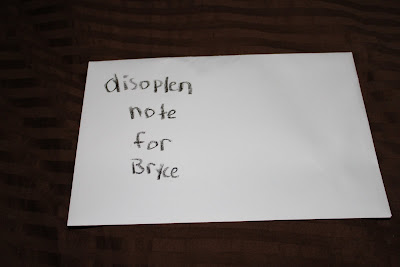 Upon opening the note I found that Bryce has not been a very good club member. The note reads (I left the spelling intact because...well...it's awesome): 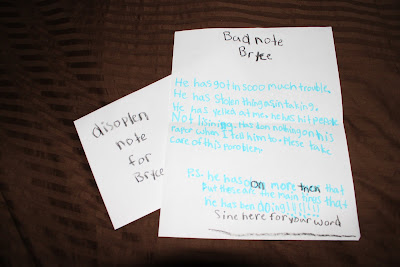 I'm going to have to talk to Bryce about his behavior at club before I can give my word though. I mean let's face it, the changes of him getting another note sent home from club is pretty high.

My latest home project. Okay, actually my only home project in say the past year, but that is beside the point.

The hallway leading into Bryce's room is very narrow, short and not well lit. I had some outdated photos of the girls hanging in that hallway and I've been thinking for years now I need to either replace the pictures or come up with something else to put there. After seeing a super cute picture of an alphabet wall online I decided to take the pictures down and do an alphabet wall. The entire project cost me $65.00 which I think is a pretty good deal considering it take up an entire wall. I had some of the letters to start with and then good old Hobby Lobby helped in getting the rest. Let's just say their 50% off wall decor came in pretty handy. Some of the letters I painted myself while some are just how I bought them. I finally talked my sweet husband into hanging the letters for me and this is the outcome... 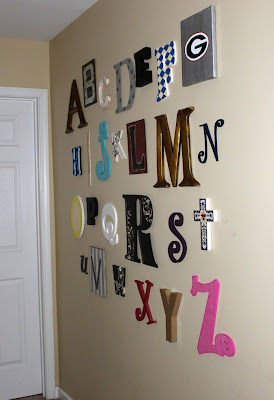 It was hard to get a good picture because of how narrow the hall is and the angle of the connecting hall, but you get the idea.

I love it!
Posted by Jen at 2:43 PM
Email ThisBlogThis!Share to TwitterShare to FacebookShare to Pinterest