I am quickly being schooled on the joys of having a boy. On a daily basis Bryce has me on my toes...constantly. From the time he gets up he is on the go. He NEVER stops! I will prevent him from doing one thing only to have him get into something else while I am trying to prevent him from doing the first thing. All the bathroom doors in our house have to remain closed. If he finds one open he goes straight for the toilet. I guess there is something fascinating about playing in the toilet. If he isn't in the toilet the next place he tries to go is the shower. He gets in the pantry, the kitchen cabinets, drawers...you name he gets into it. If he isn't getting into something he is climbing something. This little guy has ENERGY!! What a difference between boys and girls. I mean I always thought the girls were really active, but Bryce puts them to shame. Another thing he does more than the girls is put things in his mouth. EVERYTHING goes into his mouth. Yuck! The pictures below illustrate this point. Somehow Bryce got a hold of an empty printer ink cartridge at work the other day and well...put it in his mouth. It wasn't too bad because I caught him shortly after he got his hands on it, but seeing him with a partial black mouth was pretty funny. He is a little monster....the cutest monster I know. :) 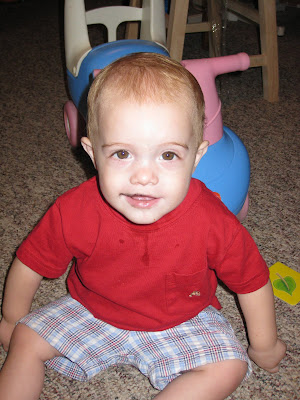 "What mom? What's the big deal? 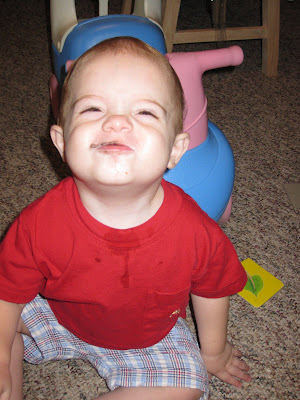 Yea, he gave me the stinker face!
Posted by Jen at 7:29 AM
Email ThisBlogThis!Share to TwitterShare to FacebookShare to Pinterest