Well well well.
I took Bryce to a dermatologist appointment this morning,
but before I get into that let me rewind about a week.
Last Monday night Bryan gave Bryce a bath. When Bryce got out of the bath Bryan noticed that he had a raised red rash all over his body. And when I say all over - I mean ALL over. From jaw line down to his thighs. We were racking our brains trying to figure out what could have caused his skin to become so irritated. Nothing in our day to day products or food hand changed so we were baffled at what could have caused this. Bryce did have Spider Man bubbles in his bath, but he has used these bubbles several times before. 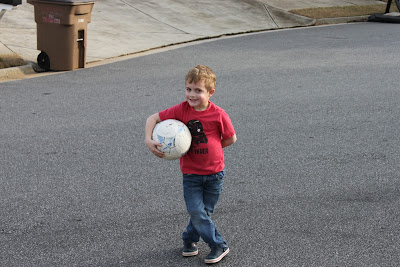 The next morning Bryce woke up and there was no change to his skin so I called his teacher and told her what was going on. She mentioned that Strep sometimes has a rash associated with it so I made the decision to take him to the pediatrician instead of going to school.
So after waiting 40 minutes in my car at the pediatricians office (they instructed us to go into the "sick" waiting room to which I boldly said in not these exact works - over my dead body - because there wasn't anyway I was stepping foot into that room with Bryce). Waiting in the car was the only other option so that's where we went. Finally we are called to a room. The doc comes in listens to what I say and assures me it's not an allergic reaction because there were no hives. He is convinced it's Strep, but I just couldn't buy that because the kids energy is the same, no sore throat and no fever. Strep test comes back negative (to the doc's surprise) and he then says to me that it's "just a heat rash". He told me to keep him dry and give him some Benedryl for the itching.
Ummm a heat rash in below freezing weather...sure Doc. So I left wanting to ask for my co-pay back while my mommy gut was screaming at me that it was not heat rash.
For the next few days I give him Benedryl in the AM before school and PM before bed. No change in the rash other than it wasn't red and irritated looking. Just bumps all over his skin. He literally felt like sandpaper. With this said - I have noticed for a few years now that Bryan has teeny tiny bumps all over his skin. It's never been super smooth, but the tiny bumps were nothing that alarmed me until they became irritated last week.
Yesterday I bowed down to the screaming voice in my head and made an appointment for Bryce to see a dermatologist. Instead of going to school today we drove in the lovely rain and traffic to Marietta Dermatology. 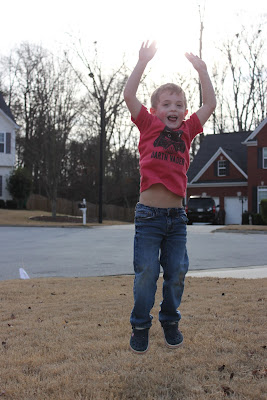 Doc comes in and looks Bryce. While he is looking Bryce over he is talking skin terms to his nurse who is jotting down everything he says. He literally examined Bryce's entire body. While he was examining Bryce's face (bumps are now on his face) he asked if Bryce had any sinus issues or allergies. I explained to the doctor that Bryce had CF and he said well that explains the dark coloring under his eyes and something about his nose (he talked fast).
Finally he stops looking Bryce over and removes his special skin glasses and says...
What we are dealing with here is topical Eczema all over his body.
FART!!!
My mommy gut was punching me in the arm saying "I TOLD you it was something more!"
Once the doc said Eczema I wasn't totally surprised. He even said "You don't act surprised". Eczema is hereditary and my mom and brothers have dealt with Eczema in the past, but none of them have had it all over; isolated areas like the hands and feet.
So not only did we pass on craptastic genes to Bryce I have passed on Eczema to him as well. Not what I wanted to hear, but at least we can work on controlling it. In the words of the doc - "There is no cure for Eczema, but you can control it" to which I replied, "Well we are experts in that area".
He laughed and said "true"! 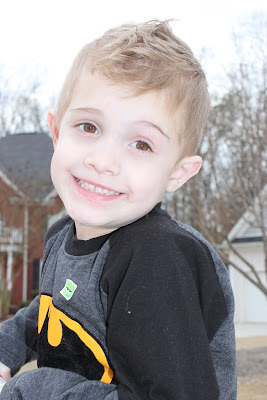 I know Eczema is not the end of the world in the grand scheme of things I just hate that Bryce has one more thing to deal with now. He was given a prescription cortisone cream that we will use when his skin flares up and he will have to use the "fancier" ($$$) lotions twice a day and body wash from here on out. I was given instructions on water temperature for showers (recommended showers verses baths which is fine because we normally do showers here and baths are a fun treat). Hot water strips your skin of oils so luke-warm water is best. The name of the game is keeping his skin moisturized so that's what we will do. What's another 10 minutes added on to our morning and evening routines. At this point the kid will have to wake up 2 hours before school and start night time routines right after dinner to fit everything in.
We go back to the dermatologist in 3 weeks to see how things are going. Until then we will follow doctor orders to a T and see how things go.
We have our first clinic of the year on Monday so please keep Bryce in your prayers.
Posted by Jen at 5:43 PM
Email ThisBlogThis!Share to TwitterShare to FacebookShare to Pinterest

Poor Bryce! I had pretty bad eczema as a kid and cortisone cream would keep it under control, but then it would come back. Eventually it went away on its own when I was around 10 or 11. I've had a few flare-ups since then but cortisone cream has managed to make it go away. Hope it's not too itchy for him, and hopefully it clears up or at least improves a lot.

Such good mommy instinct! You knew that answer from that dr was bogus! Go you! So sorry that Bryce has to add this to the already crazy life of CF. Did the dr have any explanation for why it just showed up suddenly now and not earlier? I have Psoriasis (flaky, itchy irriated scale like skin all over my head and parts of my hair line) I didn't see any effects until I was in jr high! NUTS! I hope that it stays manageable and the cream helps. hang in there....you really are a rockstar mom and I love all the great preschool advice you continue to give me!