Hi everyone. As usual I have fallen down on updating the blog. I never can find enough time in the day to get everything finished. Do any of you have this problem as well? There has been so much going on with us over the past 3 weeks. I'm going to post a few different blogs in order to get caught up on everything.

Bryce recovered rather smoothly from the flu. It came and went quicker than expected with no major issues. THANKFULLY! While Bryce had the flu he decided that suffering from the flu was not enough, he wanted to grow a few teeth as well. Add teething to an already sick and cranky baby made for some really fun times at the Jones house. Good did come out of the crankiness...Bryce has himself two adorable bottom teeth. I was very sad to see his big toothless grin go because once the teeth come in they instantly look older. Of course his new grin is just as adorable so really it's a win-win situation. ;) 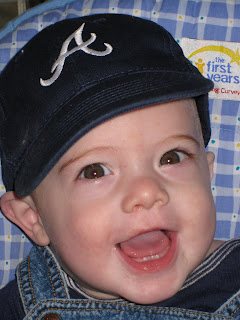 Check out those bottom teeth!
Just after recovering from the flu, Bryce got himself a lovely head cold that he is STILL fighting. We are going on 3 weeks now of major head congestion. I think I could use the "snot sucker" on him all day and get stuff to continually come out. The congestion does seem to be loosening up so hopefully our little guy will be booger free soon. With all the congestion breaking up Bryce has big coughing spells. Usually these spells are in the morning when he gets up, after naps, and around 3:30 AM every night. The cough sounds much worse than it is, but this is the only way he can get the mucus up and out. Usually this results in some wonderful and slimy spit up, like on Sunday while on the way to church. Bryce ended up coughing so hard he spewed all over the back of the car and himself. We never made it to church, but we sure looked good for a drive down the road and back. Bryce is doing breathing treatments several times throughout the day and one in the middle of the night to help with the coughing. The breathing treatments help tremendously. Please pray that Bryce can recover from this cold quickly so he can breath easier. He gets so frustrated by not being able to breath at night.

Just like the flu, Bryce has decided a cold is not enough for him. He now has decided to grow some top teeth! The teeth haven't broken through the skin, but you can see FOUR white bumps in the top of his mouth. Anything Bryce can get his hands on goes straight into his mouth so he can chew on it. Motrin, teething tablets, and Saline drops have been my best friends over the past few weeks. 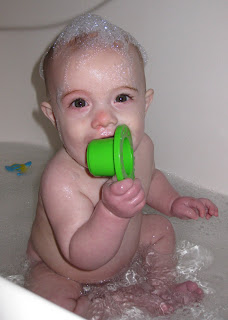 Bryce loves the bath and he loves to put anything he can get his hands on in his mouth.
Bryce turned 8 months old on March 22nd. I can't believe it has been 8 months already. I thought time flew by before Bryce, but adding another kiddo to the mix makes a month seem like a week. I guess I should get used to life being on fast forward because I don't see things slowing down for us any time soon.

One more bit of exciting news...as of last week Bryce has officially learned how to assume the crawling position. Once he gets on all fours he rocks back and forth. Sometimes he takes one or two crawling steps then he flops to his tummy. It's only a matter of time now before our little guy is off and moving. He has gotten himself from crawling position to sitting up a few times and has become a professional at rolling all over the place. (Picture to come...keep forgetting to take a picture of him. I better hurry!) 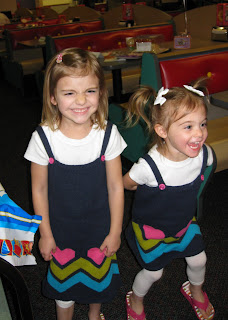 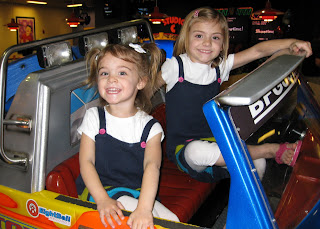 The girls enjoying a birthday party at Chuck-E-Cheese.
That's it for now. I will hopefully be back later tonight or tomorrow with another post about our trip to the farm!

Hugs to all.
Posted by Jen at 5:50 PM
Email ThisBlogThis!Share to TwitterShare to FacebookShare to Pinterest