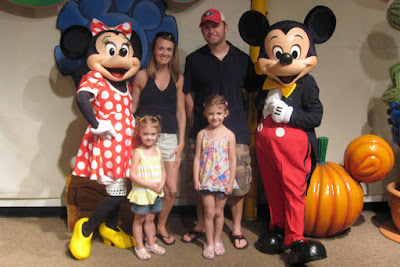 We recently made our very first visit as a family to Disney and I must say it was a blast. I hadn't been to Disney since I was 8 years old so I was pretty excited about the trip. We ended up having so much more fun than I expected. This was a short trip for us so we decided to only visit The Magic Kingdom since the girls are nuts about Princesses. Smart move on our part. We spent 2 fun filled days at the park. Honestly we could have spent another day because there is so much to see and do. We got to the park when it opened each day. We took a break in the afternoon at our hotel so we could refuel for an evening trip back to the part. If you have not been for a visit to Disney I highly recommend it. They make it so very easy and enjoyable. We bought a meal plan so Bryan and I didn't spend any money other than a few small souvenirs to bring home for Bryce and cousin Maisie. Bryce didn't come with us...he stayed at home with all the grandparents. From what I hear he didn't miss us at all!

Sydney loved riding all of the rides. She was tall enough to ride on everything. I think her favorite thing was riding Thunder Mountain. She got to ride it 3 times and all 3 times she screamed her head off. Jordyn loved meeting all the characters. She was mesmerized by the Princesses. Her favorite ride was Pirates of the Caribbean. Since we made the trip during the "off season" the lines and crowds weren't bad at all. The longest we waited in line was 30 mins. On most of the attractions we literally walked right on. Our hope is that we can make this trip again next year around the same time.

Now for our drama...it's not a family vacation without a little drama, right?!

On Sunday morning we packed up the car to head back home. We had just pasted the security gate at our resort when Bryan said there is something really wrong with our car. He had the gas floored, but the car would only go about 7 mph. He took his foot off the gas and the car abruptly stopped. Yikes!

We ended up having to have our car towed. Disney has a Car Care Center on their property with 7 full time mechanics, but they are closed on Sunday. So we prepared to stay another night. We stayed at the Disney Pop Century Resort and I must say they were so very kind and helpful. First of all our car was towed for free since we were staying at a Disney property. Then they gave us a discounted room for the night. As all the drama on the car was unfolding we had some friends of the family offer us Buddy Passes to get Sydney and I home. I needed to be at home on Monday because Bryce had a clinic scheduled and Sydney had school. While Bryan and Jordyn got settled into our new room, Sydney and I hopped in a cab (paid for by Disney) to the airport. I will say that my experience on flying stand by wasn't what I hoped for. FYI...this will be the short version of this part of the story. Atlanta was having bad weather so all flights were grounded. I was told that if I didn't make it out on the flight I was trying to get out on I would make it out on the one behind it. No problem...right?! Well, no one ever called our name, like they told me they would, and after 4 hours of waiting for a flight I went to ask the attendant if we were getting out on the next flight to Atlanta. She then informed me all the flights to Atlanta had left. WHAT!!! I had myself a lovely little melt down right then and there. I had to pull it together because I was upsetting Sydney. Disney was so nice to put us on one of their buses back to the resort. All in all the ordeal took about 5 hours and Sydney was a trooper the entire time.

Monday came and Disney Car Care couldn't handle the repairs on our car so it was towed to a Chevy dealership nearby. We were told the Hydro Boost needed to be replaced...then the Master Cylinder needed to be replaced...and then the worst news..our brake lines had somehow been contaminated with fluid other than brake fluid. NOT GOOD. While we are getting all this horrible news we ended up hooking up with Bryan's cousin Frank and his lovely wife Kayla. They live in Orlando and were nice enough to pick us up from the resort and take us to their house. Needless to say our car wasn't going to be fixed on Monday so we stayed the night with Frank and Kayla. We were bummed about our car, but happy to see Frank and Kayla. The girls LOVED hanging out with Kayla.

So - to get to the point, on Tuesday our car was still not fixed and wasn't going to be fixed that day either. The entire brake system on our car is having to be replaced. We rented a car to drive back home and are currently waiting to hear if insurance will cover the cost of the repairs since this is a contamination issue. Pray that the repairs are covered because as of right now repairs are at $4500.00. Keep in mind we have only had our car (Chevy Tahoe) for just over a year. It's a 2004 and only has 55k miles on it. The car itself is awesome, no engine problems or anything like that. When fluid other than brake fluid gets into the brake lines it will literally shut the entire brake system down. I know...how joyful.

Hopefully we will have our car fixed soon. Bryan is going to have to fly back to Orlando and then drive the car home once it's ready. It's a huge mess and has really stressed Bryan and I out, but we are very thankful that the car broke down where it did and not in the middle of nowhere. There is allot of dead space between Atlanta and Orlando!! We are also very thankful to all of the people involved in helping us during this whole ordeal. Let's just say it wasn't the best week to be stranded out of town.

Aside from our car fiasco...our trip to Disney was wonderful and we are looking forward to our next trip. I emailed a link out to shutterfly with all of our Disney photos. If you didn't get that link and want to see the pictures please let me know.

Posted by Jen at 9:25 PM
Email ThisBlogThis!Share to TwitterShare to FacebookShare to Pinterest