This past Thursday Bryce had his quarterly clinic visit. I don't have a whole lot to report because once again the docs were all very happy with Bryce's progress. He weighed in at 27.8 lbs, which puts his BMI (Body Mass Index) at 46%. His goal is to be at 50%, BUT they said that they are very pleased with where he is at and to keep up the good work.

May clinic visit includes lab work so Bryce had to get some blood drawn. I was dreading the blood work because I knew he would have a fit; however, after Bryce has his stats taken when we first arrived they put these nifty bandages on each of his arms. The bandages were filled with some sort of lotion that numbs the skin. He kept the bandages on the whole clinic visit so by the time the lab ladies came by to draw his blood he didn't feel a thing! They stuck the needle right in his arm and took 3 viles of blood. Seeing the blood was much harder on me than it was for him having that needle in his arm. The worst part for him was having to sit still in my lap...took 3 of us to keep him seated and still. I'm not joking when I say, Bryce is a very strong boy!

I don't know what got into Bryce, but while we were at clinic he was literally bouncing off the walls. My dad came with me to help entertain the monster man and he even asked me what I put in his lunch to make him so wild. He was CRAZY! Thankfully his charm out weighed the craziness because all our visitors for the day seemed to think he was too cute.

I'm so thankful for Bryce's healthy report and progress. Now we wait a week to find out the results of his throat culture. I'll post the news once I hear it. Here's to a clear culture... 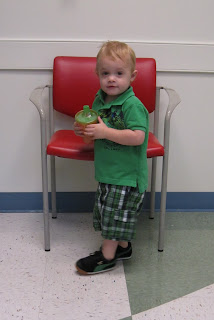 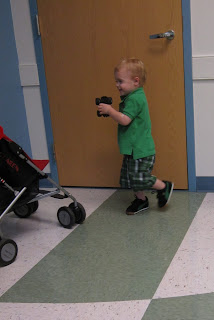 I bring an arsenal of toys to keep him entertained for 3 hours in a 10 x 10 room. First up was a truck. As you can see I could not get a good picture of him because he was literally running around the room the entire time. 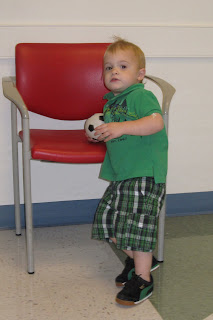 Next up was a ball that we threw over and over again. The red chair he is leaning on was also a form of entertainment. He kept climbing into it to reach the phone that was hanging on the wall. "Hello. Papa?" 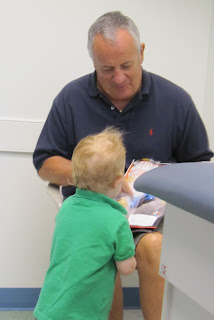 Pop showed him a car magazine. They looked at all the cars and talked about what color they were. 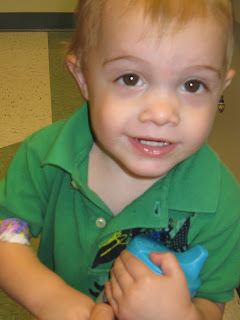 Bryce just after his blood work. You can see his band aid that stayed on his arm for about 5 seconds. He pulled that thing off real fast! He kept saying, "Uh oh. Uh oh". 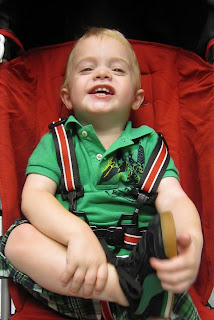 All buckled in and ready to go. Way to go Bryce on a great report! His next clinic will be in August.
Posted by Jen at 10:55 PM
Email ThisBlogThis!Share to TwitterShare to FacebookShare to Pinterest