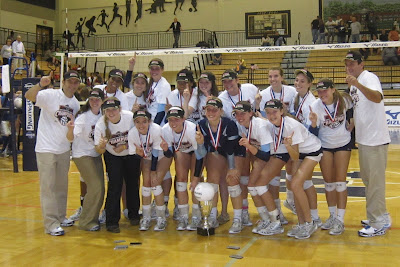 Just wanted to say congrats to the Pope Volleyball team!! Bryan and the girls won their 2nd STRAIGHT state championship title this past Saturday night (10/20/10). This was the first game I was able to attend all season due to the kiddos being involved in their own activities (soccer and dance). The girls definitely saved the most exciting game for the end of the season. The Pope girls played Chattahoochee for the title match. The game was incredible. Both teams played amazing. It was exciting and extremely nerve racking watching 2 teams battle back and forth the way they did. In the end the Lady Greyhounds pulled out their 2nd state championship and I couldn't be happier for them. They ended their season with a record of 54 wins and 1 loss.

How AMAZING is that?!

Sydney wrote a running play by play of the game while she was watching the game and I wanted to share the excitement of the game through her eyes. I have typed the below game report word for word from Sydney's writing...including her own spelling.
Enjoy. ;)

" Saterday 2010 October State chapeinship.
The state champinship is very lowd and fun. The scor is 10 to 7. Pope is wining. Number 7 was sriving (serving). right now they are having a hadol (huddle). 2 minits later. Pope is sill wining. I think pope will win! I am so excited. Naw the game is all moste don. They are playing music and it is taking a wiel (while). They are a bawt (about) to begin! This is so ecsiding (exciting). Naw the scor is 3 to 6. 3 is pope. I rely hope that pope dosn't loos. but et lest they are tring hard.
oh no!
it is 9 to 12. 9 is pope! the ather (other) teams chears are braging. They are saying in your face. and they are wining. 1 to 21! pope is srving. the scor is 15 to 24. pope vs chadahochy.
they swiched sides. I know they can win. The scor is 2 to 0. pope has 2. its all tide up. 7 to 7. But I am still nrvus (nervous). I wonder if dad is nrvis? scor 15 to 13. I bet dad is happy that pope is wining. because the scor is 21 to 18. Go pope High School! They are doing graet. Swiching sides agen.
The game is over. pope wins the state championchip.
hraay! (Hooray) They won!

Congrats again ladies, Bryan, Dave and Sherry. You guys worked so hard all season and once again it payed off big time.

Now that the Lady Greyhounds are finished with my husband I gladly welcome him back to home life with open arms!! 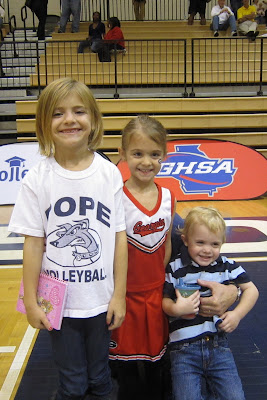 Posted by Jen at 9:33 PM
Email ThisBlogThis!Share to TwitterShare to FacebookShare to Pinterest

Wow, Congrats coach! That is awesome that the lady Greyhounds are doing so well. Where was a state championship when I played???