The Atlanta Great Strides was this weekend. What a fabulous day it turned out to be. To say that the walk was a success is an serious understatement. 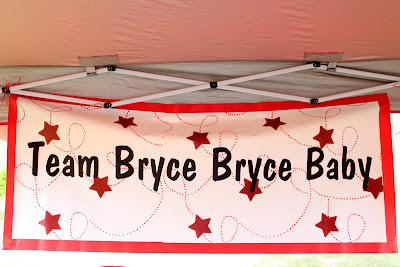 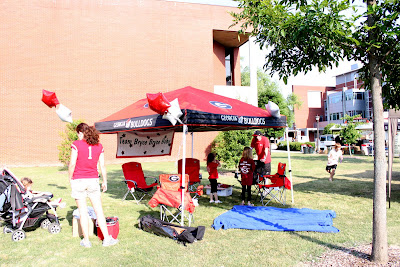 Team Bryce Bryce Baby was about 50 people strong this year. Everyone sported their new Team BBB shirts that were generously donated to us by Nfinity. A huge thanks to Nfinity for providing shirts to our entire team. I must say we looked pretty spiffy!! 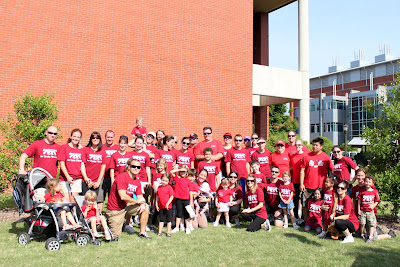 As of this moment, Team Bryce Bryce Baby has raised $9160.00. We turned in some money at the walk so I know we are still waiting on some donations to post. I think we are going to top out around $9500.00 which is the most money we have raised to date. I went into GS this year knowing it was going to be a difficult fund-raising year because of the economy, but thanks to Davis Elementary and our always supportive family and friends we had our best year yet!! I can't express enough how grateful Bryan and I are for each and every person that walked, donated, prayed or sent encouragement our way. We are always so blown away by everyone's support. Thank you for being such AWESOME people! We love you!! 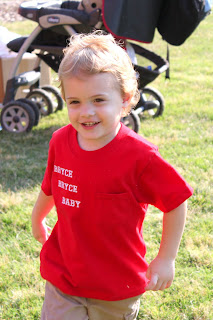 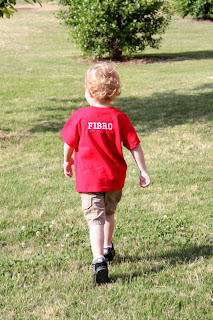 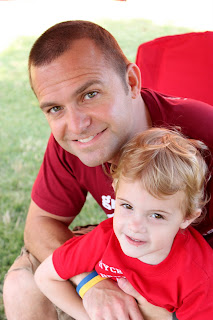 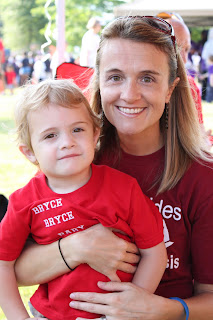 Even thought it was a typical "Hotlanta" day, we all made it through the walk with minimal sweat. ;) Kudos to those who were pushing strollers or carrying kiddos (mine included) up those hills. Although it was very hot, we all had a great time; especially the kids.

After the walk Jim N Nick's BBQ provided food to all the walkers. This is a pretty huge commitment on their part because there were A LOT of people there. The Atlanta Great Strides is one of the biggest walks in the country and it lived up to it's reputation this year. As we were eating some delicious BBQ a CFF employee walked up and asked for a team leader to help announce this year's money total. I quickly volunteered Bryan because I didn't know if this would involve having to talk into a microphone and there was no way I was going to do that! Anyway, there were 6 team leaders that came up to help announce. Each holding a number of the total amount.

One by one the numbers were help up.

As you can see...the walk this year was clearly a success... 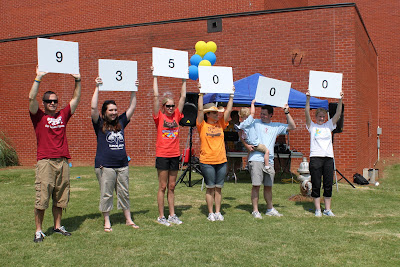 Is that not AMAZING??

The Atlanta walk alone raised $935,000 this year. Everyone was blown away by this. From what we understand this is the most money any walk has ever raised. Again, thanks to everyone who helped in making this a very successful event. As we all celebrate the success of this years walk, keep in mind that MILLIONS of dollars go into the development of each new CF drug. The Vertex drug alone has had 75 million dollars invested in it. All the more reason to keep this kind of fund-raising success going.

To all my family and friends: You are all officially on a reprieve from me asking you for money. That is until the 2012 walk rolls around!!

~ THANK YOU AGAIN...A MILLION TIMES OVER! ~
Posted by Jen at 12:32 PM
Email ThisBlogThis!Share to TwitterShare to FacebookShare to Pinterest

WOW go BBB! GO ATLANTA!!! San Diego was under that $ amount. YOu guys kicked some butt with your nine thousand!!! Love the tshirts by the way and the "Bryce Bryce Baby" team name!!! :)