Soccer season is in full swing. Sydney had her first soccer game on Saturday. She is playing on a new team this year called the Fireballs. Who wouldn't want to be on a soccer team called the Fireballs? What a fun little name. Sydney moved up in age division so there have been a few adjustments for her to get used to.

The girls played awesome and started the season off with a victory (2 to 1). Sydney played her little heart out and gave it her all the entire game. She enjoyed playing the front defender position the most, but the girls do rotate around to each position. Last year she played with only 5 girls (goal keeper included) on the field and this year she now has 6 girls on the field. They games also have an actual referee verses the coaches running the games.

I just love watching Sydney play soccer. She has such intensity on the field and tries so hard. She is really coming around at learning how to communicate with the girls on the field. She didn't get any goals this game (came really close!), but she did have some good passes and an assist. 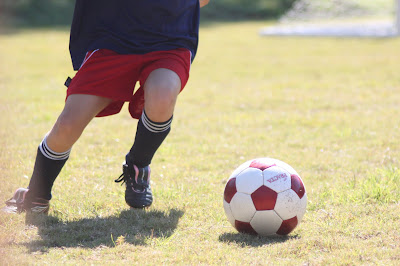 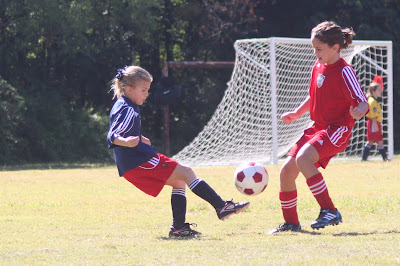 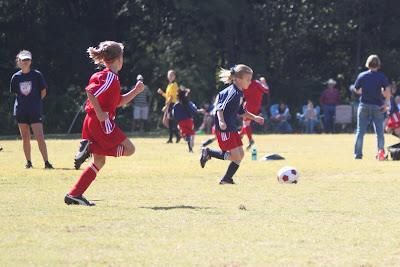 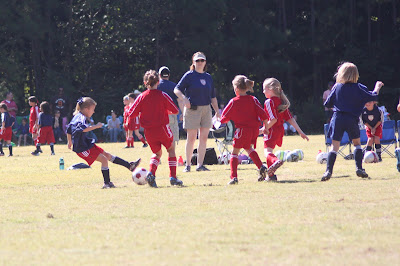 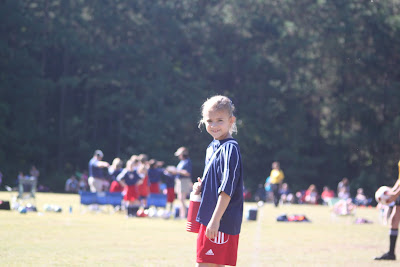 It's no secret that Bryce loves cars. Especially fast cars that go by the names: Corvette, Camero and Mustang. My brother called us on Saturday afternoon saying that he was on his way over to the house with his friend who owns a Corvette. This wasn't just any Corvette...it was a Z06 with a super charger. This beautiful machine has 814 hp and it was LOUD. Bryce was loving it. My brother took Bryan for a ride. As they drove to exit the neighborhood I said a prayer of protection. I could hear them as they turned onto the main road from the house...and then all of a sudden you could hear the car take off. Bryan said that they were only in 3rd gear at going 95 mph. Not exactly what I wanted to hear, but I'm sure it was pretty awesome! When they came back (safe) they took Bryce for a ride through the neighborhood. He had the biggest grin on his face and literally has been talking about this Corvette ever since. 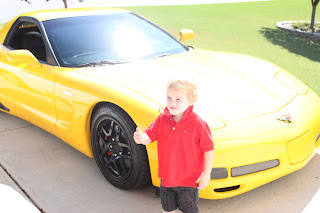 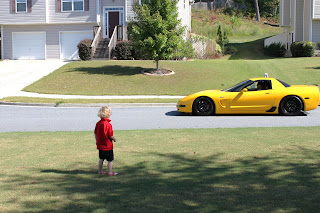 Bryan heading out for a ride. 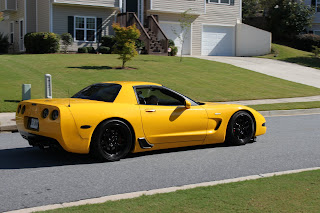 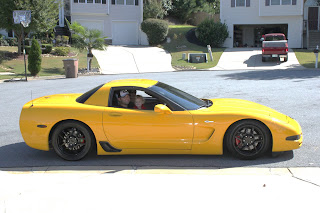 Not going to lie...I wanted a ride, but I only wanted a ride if I could DRIVE. ;) There was no way I was going to let my brother drive me because I knew he would try to scare me. I didn't really want to get that feeling of, "I'm going to die" since he has done that to me before while riding in a car with him!!

Bryan and I went out to dinner on Saturday night with his sister and her husband (Amy and Jason). A little post birthday celebration for Bryan. I had every intention of taking a photo of us girls, but I completely forgot. We had such a nice time chatting that we didn't realize how late it had gotten. When my mom watches the kids on Saturdays we always try to get home no later than 10:00 because she gets up so early for church on Sundays. Well...we were still at the restaurant at 10:20. Woops!

Thanks for dinner and a fun evening Amy and Jason.

And here we are at the end of our weekend.

Here we are on September 11, 2011. At this time 10 years ago Bryan and I were in the final stretch of preparing for our wedding. It's crazy to think that it has been 10 years. When I watch the footage on TV or look at the photos plastered all over the Internet I am immediately sucked back in time to that day. It's still hard to believe that those horrific events actually happened.

Church this morning was awesome. Our pastor was what some Southern folks call "on fire". That means he was VERY passionate about the sermon he preached this morning. Our pastor is always passionate, but he was extra passionate this morning. Awesome message to start off the 10 year anniversary of 9/11. If you would like to watch a video of today's sermon click here. The video is not posted as of this moment, but it will be up soon. Warning...we do go to a Baptist church so our service is, dare I say...longer than an hour! ;)

In lighter news today...The Pope volleyball players held a fundraising car wash with proceeds going to Bryce's Helping Hands account. When Bryce was first diagnosed, not only were we trying to digest the news that our son has a chronic and progressive disease, but we were also digesting that it's an expensive disease (what disease isn't though!) even with our good insurance. This fund has been such a blessing for us. When I receive medical bills for Bryce I turn around and send them to Helping Hands who in turn pay the bill. Any donations made to Bryce's Helping Hands fund are tax deductible.

The Pope volleyball family have been so supportive of Bryce and the Cystic Fibrosis community from the day we got the diagnosis. And for that...we are so very grateful. 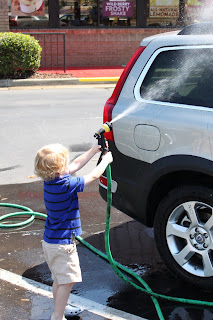 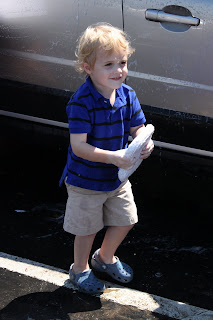 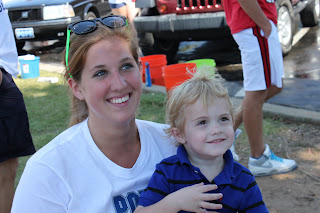 Bryce with one of the Sr. players, Katie.
Posted by Jen at 8:29 PM
Email ThisBlogThis!Share to TwitterShare to FacebookShare to Pinterest

Look at Bryce's face! Clearly he adored that car, it is rather nice too!!

I cannot believe how busy you guys are all the time, it's awesome and I love to hear about the girls playing (I'm sorry but I have to go all English on you) football and how well they are doing :)

I hope this season goes well for them, we're cheering from over here.
Thanks for all the well wishes for Soph too.