I knew I was going to post a blog today;
however, the planned topic has been changed. 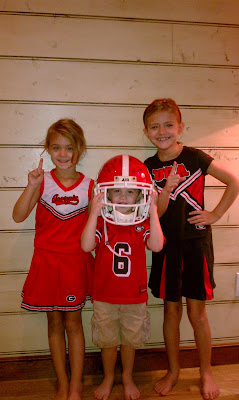 My plan was to write about the beginning of football season. As you guys know we are a DAWG loving family...but the opening game of the season did not have the result we were hoping for. It was an UGLY game.

So, with that said we will not speak anymore of the
unfortunate outcome of last nights game.
No more.
Understand.


Instead I have a funny story involving who else...Bryce.

My dear friend Amber made the trek up to our house last night to hang out (I would say watch the game, but we are not speaking about the game). We were upstairs in our bedroom chatting while Bryce was doing his beat box. When he was finished, he walked over for a little help with taking off his vest. Since we were sitting on the floor he proceeded to get all up in Amber's personal space as he does with everyone. He asks Amber, "Hey. Where you been?". I'm assuming he asked her this because he hasn't seen her since his birthday party. I proceeded to tell Bryce that Amber has a baby living and growing in her tummy. She is a week shy of 20 weeks and has a nice little baby bump showing. He bends down and starts pushing on her belly to which I told him he could not press on her belly. He has a look of inquiry on his face so he stands up causing him to be face to face with Amber. He then starts to open her mouth with his hands...Amber graciously follows along because she is such a good sport.
Bryce looks into her mouth and yells,

There was silence for a moment as Amber and I register what just happened and then we started laughing hysterically.
In the midst of our laughter I said, "He thinks you ate a baby!".

These kids I tell ya...way too funny!

Happy Labor Day weekend everyone!
Posted by Jen at 9:07 AM
Email ThisBlogThis!Share to TwitterShare to FacebookShare to Pinterest

ahahaha! What a funny little guy! Love the story and love the photo of the kids decked out in their gear.