I typed out a long detailed post regarding Sydney's ACL recovery, but then decided that maybe a shorter version was the way to go.
So...here's the latest.

Sydney was moving along nicely in her recovery after surgery on August 23rd to repair her ruptured ACL and a partial tear in her meniscus. She was going to physical therapy twice a week and was progressing really well. She was actually ahead of where she needed to be with her range of motion when we hit a snag in the plan. 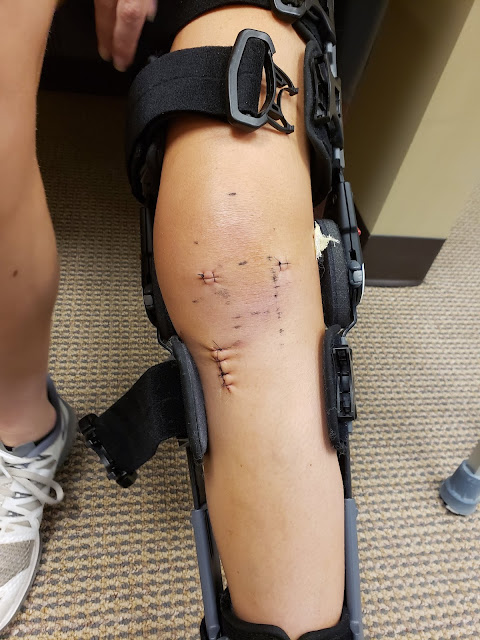 Stitches and stuff.
A few days after her surgery. 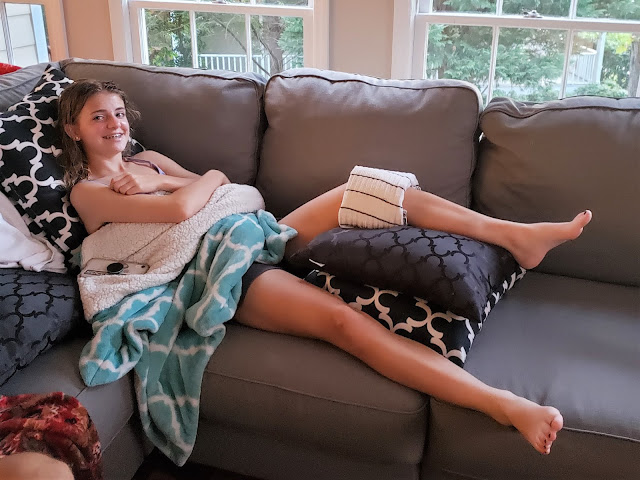 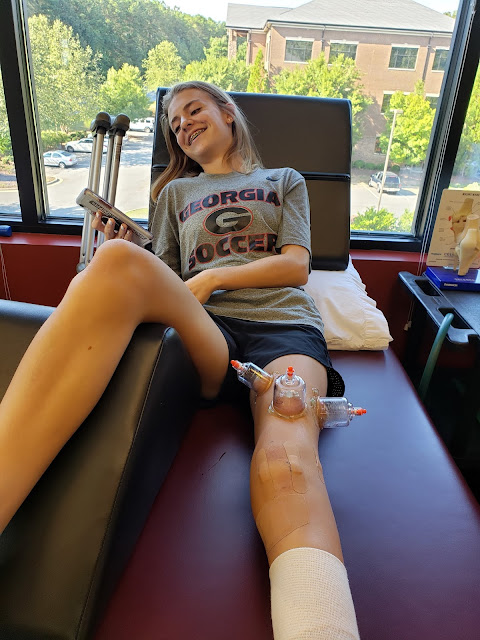 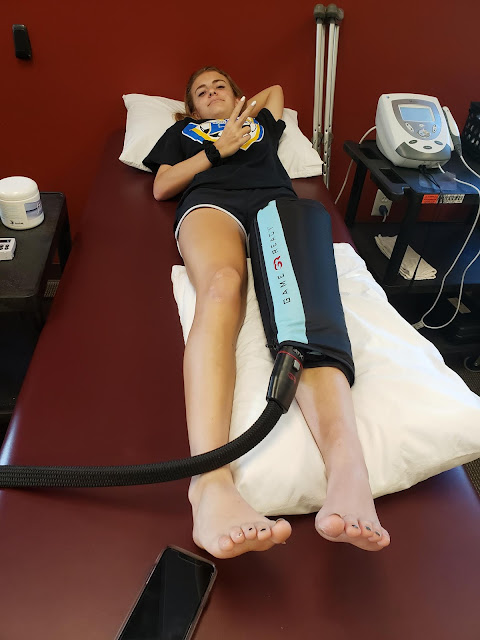 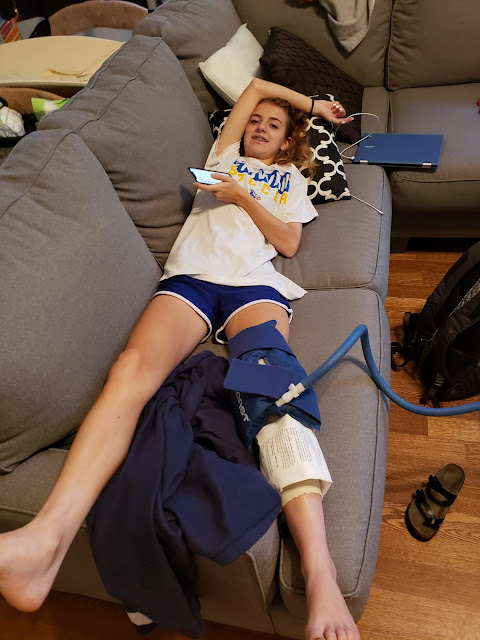 Like I said...lots and lots of icing even at home. 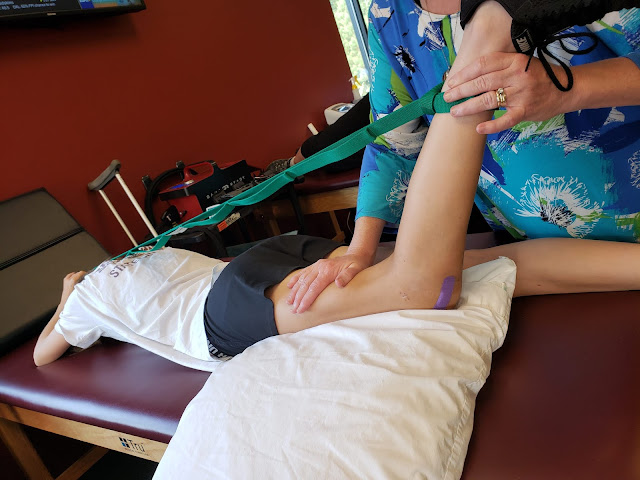 Working that in range of motion at PT. 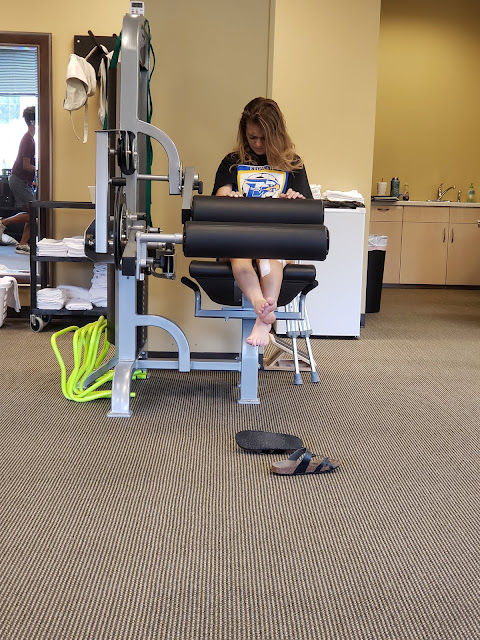 Doesn't look like much, but she was pressing her right leg on top of the left ankle to push it down to get the knee bending.

Over fall break Sydney went apple picking with friends. We figured apple picking was a pretty mild activity for her to participate in. She hadn't been able to do much of anything so a nice afternoon out with friends to pick apples seemed harmless. Turns out that apple picking wasn't the best idea because our girl went and slipped on an apple.
Only Sydney y'all. 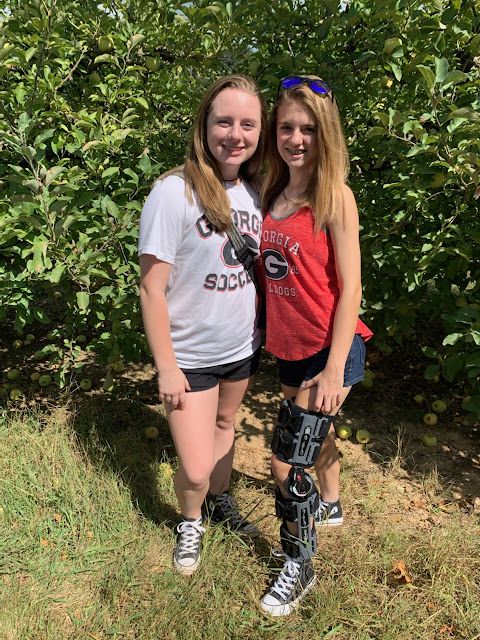 Not sure if this is pre or post slip, but she looks cute and so does Morgan.

The kicker here is that we didn't learn about this important piece of information until about 10 days later. During those 10 days after the slip Sydney's knee basically locked up on her and became very inflamed. Her physical therapist was baffled at this since it basically happened over night. She wanted us to see the doctor to get his opinion. We visit the doctor and he too is very concerned about how stiff and inflamed Sydney's knee was. He prescribes a round of steroids for the inflammation and orders her up another contraption to wear on her knee/leg at night called a Dynasplint. This splint basically puts pressure on the knee/leg to straighten it. He gave us 4 weeks in the splint combined with increased PT sessions to get the knee straight otherwise he was going to have to go back in to "manipulate" the knee. This is the very watered down version so if something doesn't make sense just ask me to explain. It wasn't until AFTER this appointment that Sydney "remembered" to tell us she had slipped on the apple. I'm betting you are eye rolling right now! Trust me...Our jaws hit the floor when we heard this important piece of information. 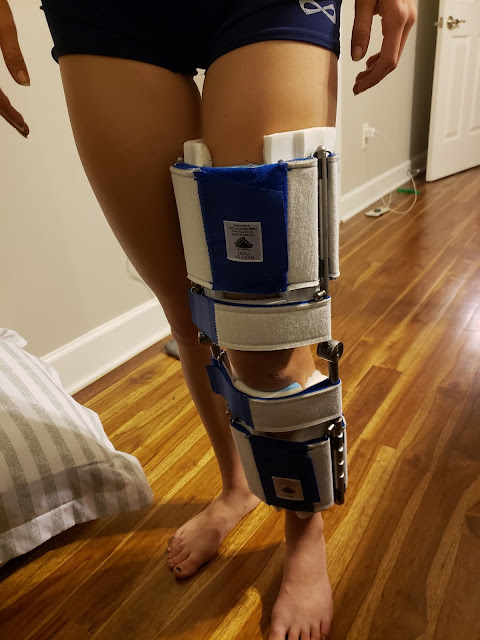 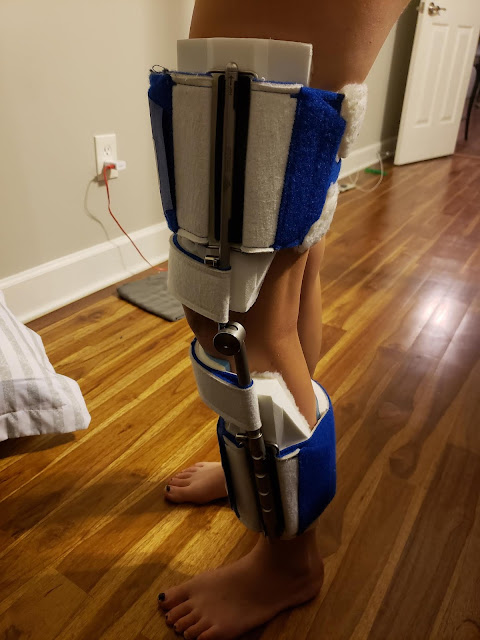 The Dynasplint. The rods running down the side are basically tension rods that you tighten with a tool. The higher the number on the rod...the more intense the tension.

About two weeks into our four week Get Your Knee Straight Game Plan, Sydney's physical therapist texts me to express her concern as there has been basically no improvement and she even felt like things were getting worse. She was starting to wonder if Sydney tore something again when she slipped on the apple. Go ahead and insert the little red emoji with the black strip over the mouth to bleep out the cuss words here.

So instead of waiting the full 4 weeks to see the doctor we moved the appointment up. The appointment was on Tuesday (10-22) of this week and based on the doctor's assessment of Sydney's knee he said our girl needs another surgery. Yes people. Another surgery. Yesterday (10-23) we had another MRI done to see exactly what is going on in that knee of hers. Today we headed back to the office to get the results.

NOTHING was torn. Let's just give a big Thank You Jesus for that wondeful news. I tell ya, I was totally prepared for the doctor to tell us she tore the ACL again. Thankfully everything looked good on the MRI so what she is dealing with is scar tissue that has basically locked up the knee. The doctor will go in and clean out all the scar tissue and double check that there are no tears or other issues going on. Her surgery is set for next Wednesday (10-30) and the very next day she will be going to physical therapy. Actually she will be hitting PT 5 times a week for 2 to 3 weeks. Aggressive PT is a must. If things are progressing well from there she will drop PT down to 3 times a week.

It is a bummer that she has another surgery ahead of her, but thankful it isn't anything as major as the first surgery. With some serious hard work I think Syd can make up most of the time she has lost due to this unfortunate bump in the road. Any prayers you want to say for our girl are appreciated.

This all escalated because of an apple.
An APPLE!


Here is our girl before we left for the MRI yesterday. This was shortly AFTER she got her braces off! 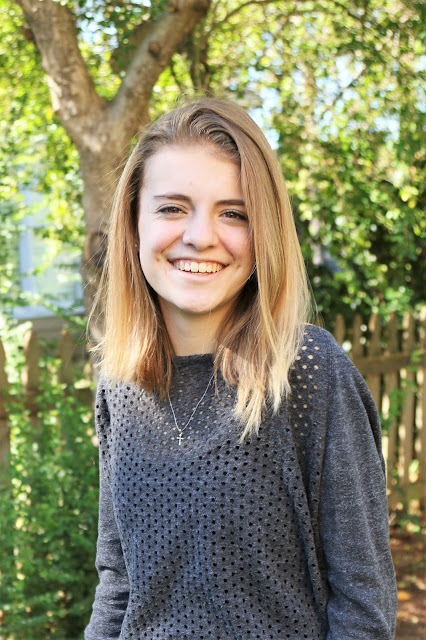 Posted by Jen at 6:26 PM
Email ThisBlogThis!Share to TwitterShare to FacebookShare to Pinterest