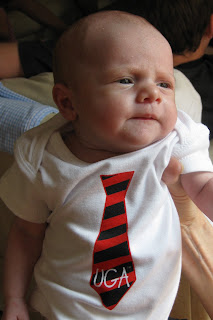 Well...Wednesday (9/3) was a long day for us. We headed down to Children's once again for Bryce's sweat test and visit to his GI doctor and Pulmonary nurse. Bryan and I received so much information that we both felt overloaded and overwhelmed by the time we left the doctors office. We got to Children's around 9:00 and didn't get into the car to go home until 2:15. We were not expecting our day to be so long, but we are feeling really good about our visits. First let me say there is no way I could put all that we learned in just one blog because it's just too much so I am going to just give a little taste of what we learned.
I titled this Blog "Positives" because Bryan and I felt like we've got a lot of positive news to share. 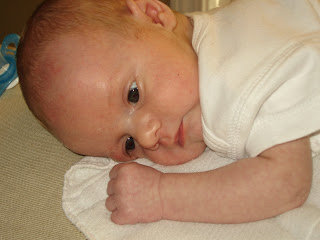 First off...Bryce took another sweat test and it did come out positive as we expected. This 100% confirms that little man has CF. This of course was not a surprise to us, but we were very happy that he sweated enough for the test. This is good because if he hadn't we would have to take it again. I think the reason we had to have the sweat test results is for insurance purposes. The test did show that Bryce is a salt looser, which is what causes the mucus in his body to be thick and sticky. This thick and sticky mucus is what causes many of the problems CF patients have. The reason Bryce's mucus is thick and sticky is because the cells in his body get clogged I guess you could say. The salt gets trapped in the cell...where there is salt there is water so the salt and water can't get out of the cell to get to the mucus. The water is what helps the mucus become a slippery mucus. Slippery mucus is good because this is what helps many mucus producing organs work properly -kind of like oil helps a car run...mucus helps our bodies run. This is a very basic explanation of this. I tried to keep it as simple as possible. Hopefully it made since and hopefully I got most of this information correct!! 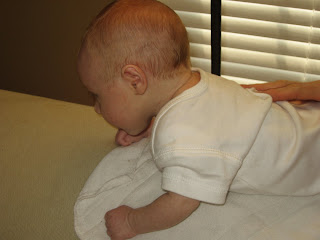 Another positive: Bryce has gained more weight! He weighed 8 lbs 3 oz. It's amazing how this weight has changed his look. He is still a string bean, but he really looks so much thicker than he did 2 weeks ago. The enzymes are really working well for him. He has also started on vitamins and a prescription gas pill. He started on the vitamins today and he took them much better than I thought he would. The vitamins are in liquid form, are bright orange and smell something horrible, but he didn't protest taking them too much so that is a good thing. I guess he will learn to love them. :) 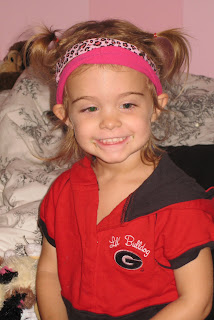 Bryce will take enzymes for the rest of his life before he eats anything. He is currently on a small dose of enzymes called Creon 5. As he grows he will eventually end up taking Creon 10. Bryan and I were really concerned about the cost for the enzymes. Currently Bryce has 6 to 7 feedings in 24 hours so that is 6 or 7 pills a day. The prescriptions are written for 100 pills at a time. That really only covers approximately 10 days. Here is where another positive comes into play. We have been signed up for a program called Wee Kids. This program is wonderful because for the next 3 years of Bryce's life we get FREE enzymes and vitamins. YAH!!! Another positive associated with Bryce's medication is all of the new medications coming down the pipeline to help CF patients. There are at least 4 new drugs that are very close to reaching the patient distribution stage. Each of these drugs will benefit Bryce, which is so reassuring. One drug in particular looks to be amazing. It helps water down the mucus. We saw an illustration of what the drug does to the mucus and the difference in how the mucus looked was substantial. 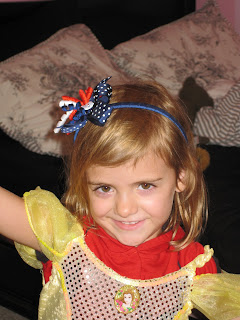 Bryce has a team of specialist that will be at his disposal ranging from specialized Dr's (GI and pulmonology) to nutritionist to a social worker. There are 12 people associated with this team, which really makes us feel like he is going to get the best care possible. This team specializes in CF so we are very grateful to have these people helping us for the long haul. One of the people on his team is a therapists that is going to teach Bryan and I chest therapy. Bryce has to have this chest therapy 2 times a day. We will do this by hand until he is about 15 months old. Every so often (not sure when or how often) we will go to something call Clinic. At Clinic we will meet with all the people on this team so we can ask questions, they can check on Bryce's progress, etc. How great is it that we can meet every so often with all of these people on the same day?! 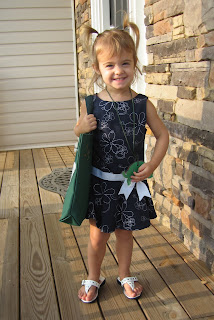 A fun positive for Bryce is that he will always be on a high fat, high protein, high salt diet. It's funny to hear doctors telling us to leave the low fat foods on the shelf for Bryce when usually they are telling people the opposite. Bryce can eat all those yummy, salty, fatty foods as much as he wants! I don't think he will protest this very much when he gets older. When we were told this Bryan and I looked at each other and said "Greaaaaat". Reason being is that Bryan has high cholesterol so he will be eating the complete opposite of Bryce. I guess at dinner time we can all pretend we are eating Bryce's dinner. ;)~
And last but not least...the biggest positive of them all...
Thank the good Lord above that we have insurance! Bryan and I were equally shocked at the cost of the medications Bryce will be on in the near future. I can't remember exactly what the medications are for (each for something different) because my brain froze after hearing the cost associated with each medication. He will have a monthly shot that costs $1000.00, another med that is $1400.00 a month, and then ANOTHER that will be $2600.00 a month. He will also have breathing treatments so I am pretty sure we will have a nebulizer at the house. And last but not least the "vest". Around 15 months Bryce should be big enough for the vest. The vest will basically beat (not hurtful) on his chest to loosen the mucus in his lungs. This vest cost $16000.00. Can you believe that??? As he grows he will need bigger vests. All of this is supposed to be covered by insurance thankfully. Let's just hope that is the case.
Well...this is just a small amount of the information we got on Wednesday. As you can see it was a lot to take in, but it was great information to get. I felt so encouraged leaving the doctor appointment.
Thanks again to everyone for your prayers and words of encouragement. We are so grateful to our family and friends for all of your support. We also love the fact that you all enjoy learning about Bryce's condition as we do. The more that are informed the better!
Love to all...big hugs and kisses...

Pictures: One of the pictures of Jordyn is from her first day of preschool. She started on Tuesday of this week and LOVED it. Today as we waited in the carpool line she kept telling me "Go mom Go". I had to explain to her that there were cars in front of us and we had to wait our turn. She was really excited to get to her class. The other pictures are from Saturday - game opener for the Dawgs. The kids were all decked out in their gear to cheer on the Dawgs. One of the pictures of Bryce shows him holding his head up doing tummy time. He's a strong boy!

Posted by Jen at 1:14 PM
Email ThisBlogThis!Share to TwitterShare to FacebookShare to Pinterest