Hi everyone. On Monday November 2nd Bryce had clinic. This was the 1 year anniversary of his very first clinic. Even though clinics are a long process I tend to look forward to them so I can ask questions and see the progress he has made from the last clinic. Once again Bryce got a great report, which we are thrilled about. We will know throat culture results in 2 weeks. Fingers crossed for a negative report. 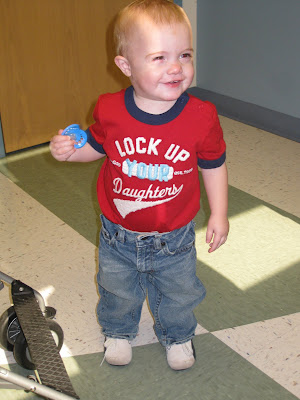 As usual Bryce is still low in weight, but in his defense his parents aren't very big people. ;) He has been steadily going up in his weight from visit to visit so that is what matters most. He currently has head congestion and snotty nose so they prescribed him Flonase (sp?) to help dry him out. Once he drys out we can stop the Flonase so this is not a med that he will take on a daily basis...just as needed. He had his first chest X-rays done. This was not a fun process. Bryce did NOT want to cooperate so it took Bryan holding down his legs and me holding down his arms to accomplish the task. He cried the whole time and fought us so it pretty much broke my heart; however, he has CLEAR lungs so it was worth the trouble. 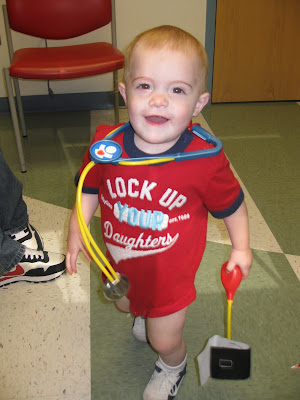 We go to clinic again on February 1st. His goal is to weigh 22.8 lbs by then so I will be stuffing this boy with food every chance I get. My goal is to beat the weight they want him at. With all the holidays coming up and yummy food...I think we can do it!! 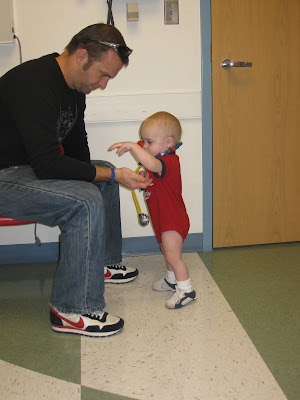 When we first got to clinic Bryce was a bit of a cranky pants since he had just woken up from a nap. But after a few minutes he was hamming it up for each person that came into see him. He even had Bryan and I laughing. He was showing all the Docs how he could jump and dance and strut. Everyone that came in to see him commented on how he doesn't stop moving. Feel sorry for me!!! ;) 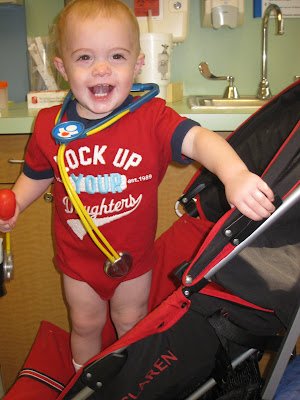 We are thankful for another good report and as always, thankful for all the support and prayers that come Bryce's way.
Posted by Jen at 1:36 PM
Email ThisBlogThis!Share to TwitterShare to FacebookShare to Pinterest