Bryce and I headed down to CHOA earlier this week for his May clinic.
As usual, Bryce was excited to see his CF team. This boy loves going to clinic and I really hope he continues with this attitude for years to come. 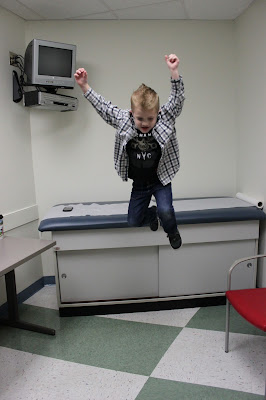 I don't have too much to report, which is always good news.
It was a great visit with everyone happy with where Bryce is. 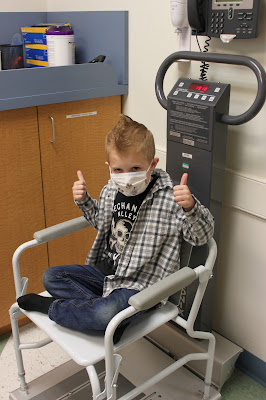 Notice that it is May and Bryce has on jeans and a long sleeve button up shirt.
Our Spring hasn't been so Spring-like.

Feeding Bryce can still be a very frustrating ordeal, but I will say things are slowly getting better. He is slowly...and I do mean slowly starting to try new foods. Some days are much better than others, but he isn't eating just PopTarts and cereal anymore so I feel like we are making some progress! 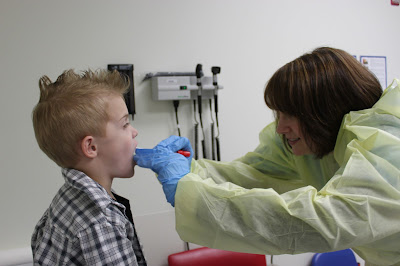 Every clinic Bryce gets a throat culture to see what bacterias he is growing...good and bad. Kid is a stud when it comes to be swabbed. So proud of him because even though the swab is fast it is definitely not comfortable.

We were schedule for labs, but turns out the lab was short staffed so they couldn't send anyone over to perform the blood draw in our room. They gave us the option of going to the lab in the main hospital after we finished up with clinic, but I wasn't really feeling that since the day is long already. I have been to the lab and it's not the quickest place so we pushed off the labs until next clinic which was fine by me. It's was also fine with Bryce because one of the first questions he asked when we got there was if they were going to look at his blood this visit. 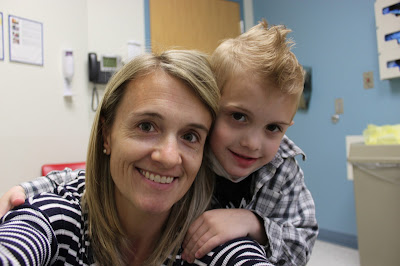 His lungs are sounding good, but he is currently doing his "Darth Vader breathing" so we are pumping up his Flonase 2 times per day to keep him opened up a little more. You can hear him trying to move air in and out of his nasal passages so hence why we say he sounds like "Darth Vader".

We have some serious homework to do on the huff cough. I will admit I have really slacked off on this lately. He does his version of the huff cough after every 5 minute cycle on his vest. (He does 30 minutes total, but the vest stops every 5 minutes so he can huff/cough). We have a few exercises to do at home to get him moving a long with the huff cough. One is huffing on a spoon or mirror so he can see his breath fog up and the other is to move a tissue with his huff.
I would say he gets it 1 out of every 5 attempts. We can definitely do better! 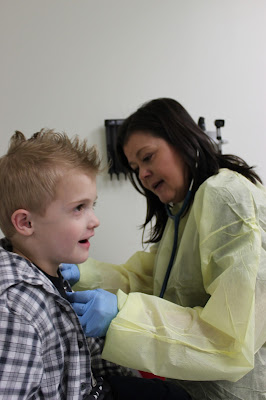 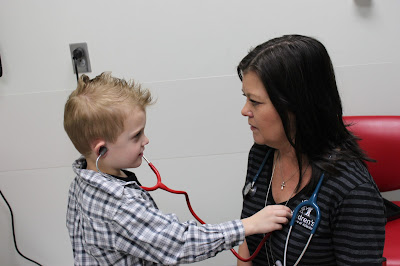 Bryce has his own stethoscope (it's a real one!) so he enjoys checking everyone's heart and lungs too.

The most exciting part of clinic was Bryce got his first attempt at PFTs (pulmonary function testing). PFTs are test used to study how well the lung works. The test measures a few things: FVC - forced vital capacity which is the amount of air a person can exhale with maximum effort and also the FEV1 which is the amount of air a patient can forcefully exhale in one second. These two things together are important in measuring lung function because lung damage decreases the amount of air that can be exhaled in only one 1 second so PFTs help track what the lungs are doing from clinic to clinic. If the numbers start going down you know there is an issue. Typically our clinic doesn't start PFTs until you're at least 5, but they wanted to go ahead and see what Bryce could do since he will be 5 in 2-1/2 months.

Bryce did pretty well for his first time. He blew into the machine while he watched a computer screen. As he blows into his mouth piece he could watch how his big blow would either blow out birthday candles or move a rooster across the screen. Bryce did maybe 6 or 7 blows and our respiratory specialist took the best "loop" of all his blows to calculate. At first I don't think he really understood what he was doing, but I think towards the end he started to get it. His biggest problem other than standing still was keeping his mouth closed tightly around the mouth piece and not making noises with his voice while he was trying to blow, which lets be honest...was pretty darn funny.
His FEV1 was 92 which falls into the normal range which is great! 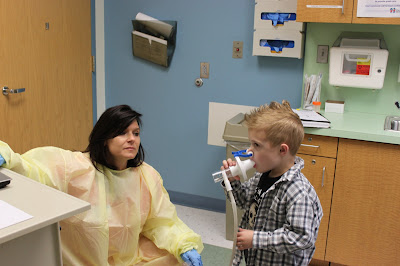 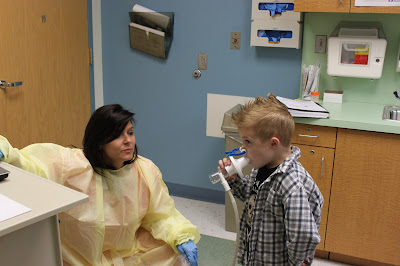 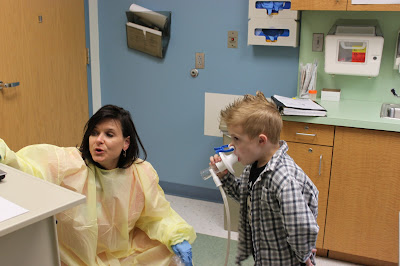 And that is that folks. Another positive clinic under out belts. Now we do the dreaded wait for the culture results. I should have those by the end of next week. Of course we are praying for normal flora results! Thank you to all who continue to pray for Bryce's health. We are so blessed to have wonderful family and friends praying for our boy. It means so much to us that you guys are continually asking about him and are genuinely interested in his CF journey. I thank our Savior daily for Bryce's health and the wonderful support group we have. Love to you all! 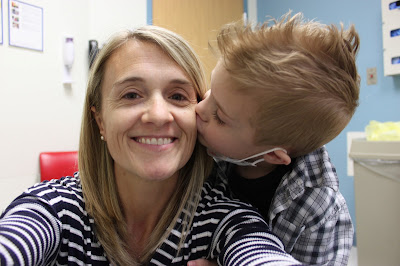 We are still in the midst of our Great Strides fundraising efforts. The Atlanta walk is in 2 weeks so if you haven't donated yet there is still time! I'll even add the link below to make it easy for you.Team Bryce Bryce Baby has a decent size goal to reach and we are SO VERY CLOSE!!

Posted by Jen at 7:34 AM
Email ThisBlogThis!Share to TwitterShare to FacebookShare to Pinterest

GO Bryce! 70% BMI is awesome!!!!! That's really cool he got to use the pft machine. I hope that's on our list soon. Congrats on an awesome clinic!!!